The two losing mayoral candidates and their supporting casts intend to back real estate developer Joe Menza over At-Large Councilman Jerome Jewell in the Hillside muncipal runoff, according to Councilwoman Shelley Bates and a spokesman for former School Board member Andre Daniels.

“Of the two candidates who are running, I definitely support Joe Menza,” said Bates, a grassroots Democrat and Obama activist whose running mate, former School Board member Sip Whitaker, was the target of a mailer initiated in the final days of the campaign by the Jewell organization, highlighting a domestic battery charge from the 1980s.

“All parties have to come together in order for Hillside to move forward,” said Daniels spokesman Selvin White. “We do not need to have the Democratic chairwoman running the township. Jewell is nothing more than a puppet.”

On Election night a week ago, Jewell led all vote-getters unofficially with 1,413, followed by Menza with 1,165. Bates and Daniels received 435 and 214 votes respectively. 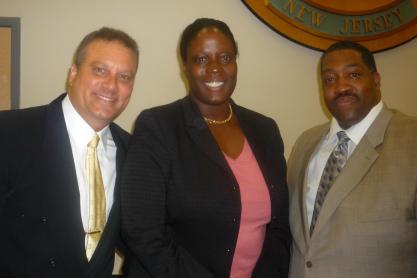