In an unorthodox endorsement announcement, Councilwoman Beth Masontoday threw her support behind Dawn Zimmer for Mayor and Vincent Addeo, Raul Morales II and Ravi Bhalla for City Council in the June 9 runoff election.

By so doing, Masonessentially backed a two-each fusion ticket of team members fromboth her own and the Zimmer slates, andshunned those left standing on the Cammarano Team and two of Zimmer's other running mates.

“Last Tuesday, Hoboken voters cried out for a much-needed change in the way our government works, and whom it works for,” Mason said. “I remain firmly committed to the idea of a ‘One Hoboken’ ticket to deliver the change the public demands. I wholeheartedly endorse Zimmer, Addeo, Morales and Bhalla, and encourage all my supporters to do whatever they can to help elect this new team for One Hoboken.”

And, of course, left Cammarano and his down ballot competitor still in the contest, Angel Alicea, bereft ofMason love.

Since her loss a week ago today, political observers said Mason’s decision about who she would back for mayor between arch rivals Zimmer and Cammarano was complicated by the fact that two of her running mates made the runoff election and appeared to be poised to run with Cammarano, probably moreout of ballot positioning necessity more than anything.

“I’m talking to both candidates and others and that process is going on now,” Mason had told PolitickerNJ.com earlier today shortly after emerging from a Tuesday meeting with Zimmer.

Mason met yesterday with Cammarano, with whom she has had an especially stormy political relationship, flaring most perilously close to irretrievable when Cammarano saidMason would be a liar if she denied playign a role in dragging his family life into the contest.

Mason in a statement this afternoon strove to identify in Zimmer an affinity of purpose.

“I stand for everything I’ve ever stood for in terms of transparency and an economic plan for the city,” said Mason when asked about what issues from her own platform she would need to see championed before backing either Cammarano or Zimmer, before ultimately endorsing fellow self-styled reform candidate Zimmer.

Mason team members Addeo and Morales had both made the runoff as council candidates, as did Cammarano ticket mate Alicea. That blend of candidates will square off against all three of Zimmer’s candidates: Bhalla, Marsh and Mello.

The Cammarano Team wouldn't immediately respond to the newsas they gulped downMason's endorsement and said they intended shortly to generate a response. Zimmer was not present at an 11th hour, stealth-modepress conference Mason held to make her announcement, anddid not immediately issue a statement.

Masonexplained her endorsement of Zimmer as well as Bhalla, Addeo and Morales.

“With the help of this team, Zimmer will easily be able to bring Hoboken residents the change they need,” Mason said. “I believe she has the experience to lead Hoboken to a bright future, and I am equally enthusiastic and adamant about the importance of having these particular council members in place to work with other council members seeking change, and work with Zimmer to put these plans into action.

“I continue to firmly believe that the way to bring true change, and true reform, to Hoboken is by building bridges between different pockets of the community to implement policies that work for all of us,” she added. “Vinny Addeo is an expert in labor relations, Ravi Bhalla is an expert in rent control and affortable housing, and Raul Morales is smart, energetic attorney and a leader in our Hispanic community. The three of them have the desire and ability to communicate our message to a broad range of constituencies. The way to make Hoboken’s government work for all our residents is to elect this ‘One Hoboken’ ticket, offering a diverse representation of the community.”

Mason wouldn’t say initially whether the scrambled loyalties of candidates in the down-ballot positions might ultimately inhibit her ability to make a choice for the top position.

“All options are on the table,” Mason had said.

If her selection today is any indication, it proved not to bean obstacle, and Zimmer allies rejoiced at the box they say Mason's cross-polinating puts Cammarano in, as he is forced into a situation where he can't run with a full slate unless he either endorses Mason's surviving running mates or tries to pilfer Marsh and Mello from the ticket-topping Zimmer, who has no intention of abandoningthem.

"This move by Mason was as brilliant as her campaign itself was boneheaded," said one Hobokenite who had watched the councilwoman's mayoral meltdown end in a third place finish behind Zimmer last week after she had led at least two polls conducted earlier this year.

Masonlaughed off a report that she now plans to relinquish her council seat.

“I’m not going anywhere,” she said. 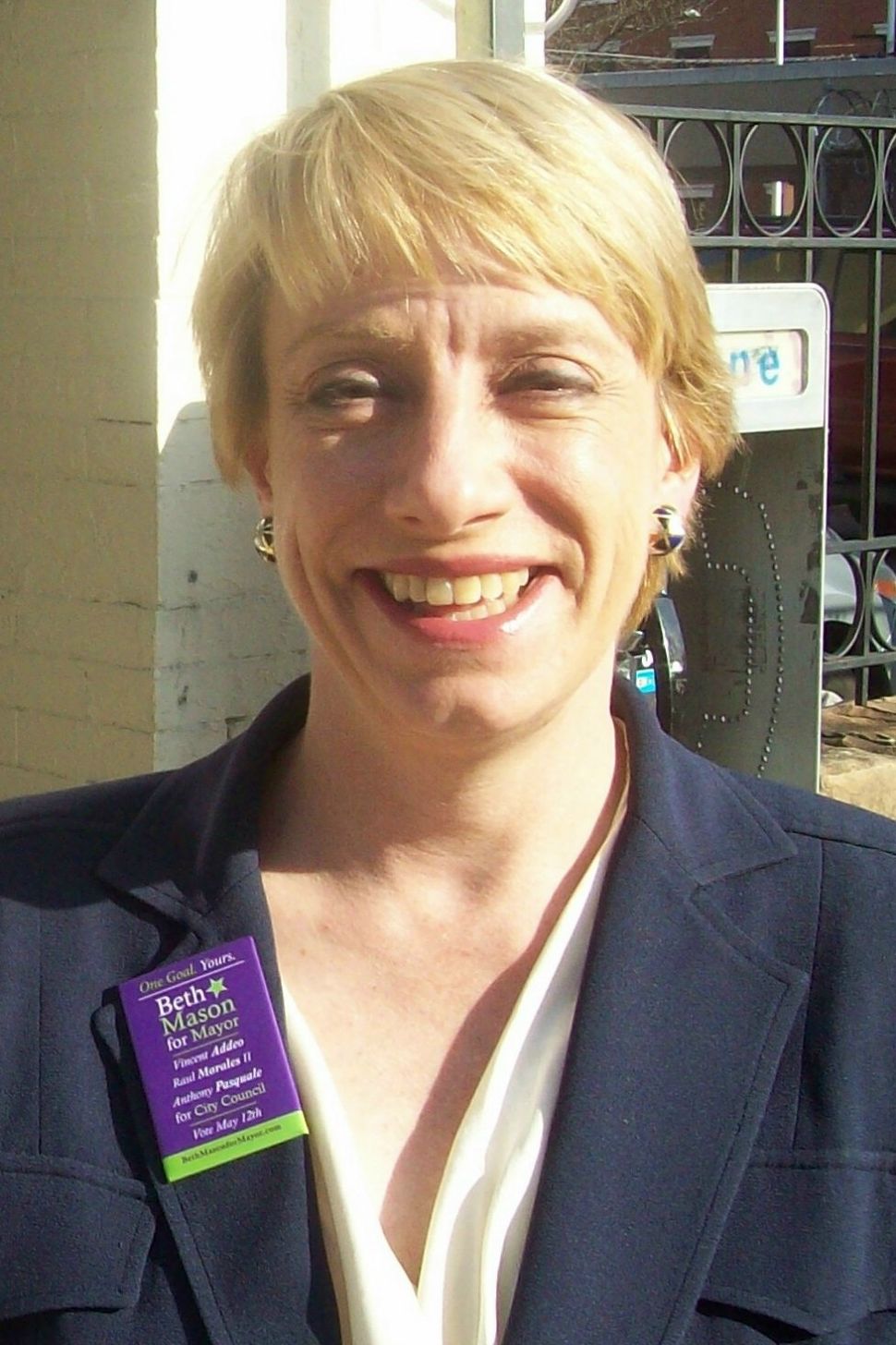