Wendy Keys’ Milton Glaser: To Inform and Delight unfolds as a labor of love and mutual respect between Ms. Keys and Mr. Glaser, onetime colleagues in the early ’70s on the Board of Directors of the International Design Conference in Aspen. Ms. Keys, a longtime program director at the Film Society of Lincoln Center, arranged film series for the Aspen conference, and Mr. Glaser was the master designer.

As Ms. Keys recalls her first exposure to Mr. Glaser’s eloquence as a public speaker in her Director’s Statement: “I remember the first time I saw him give a lecture. It astonished me that a man whose work was so visual could also be so verbal. He had the audience completely entranced as he articulated his complex ideas with exquisite clarity and glorious imagery.”

When Ms. Keys finally approached Mr. Glaser to do a documentary about him, she worried as a first-time filmmaker that he would insist on a more experienced director for the task. Instead, he immediately accepted her offer, saying that he enjoyed the idea that they would both be learning as the work progressed.

What elevates the film to something more than a talking-heads documentary is the rapport established between Mr. Glaser and Ms. Keys on a project they both saw as a visual and verbal love letter to New York City, emblazoned in the Glaser-designed omnipresent I Love NY logo with a heart sign in place of the word “Love.” Throughout the film, Mr. Glaser is entertainingly irrepressible as he displays not only his full confidence in the proceedings, but also the impatience of an 80-year-old visual visionary who seems to have been waiting all his life for the opportunity to present this vision on film. His zest and glee in the process are truly infectious. 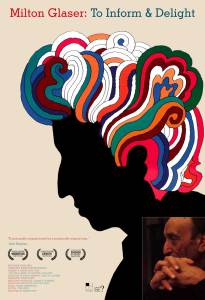