“We share a lot of things in common,” said Christie. “Jack and Bridget (two of their children) sit next to each other in class at Assumption School. …I’m thrilled to have John here.”

“Our differences are pretty well documented,” Murphy said. “Certainly they have sold newspapers. What was not alluded to is we are both family men who believe in public service.”

The pair of Morris political products waged a memorably hardnosed war in 1997, when Christie ran for re-election to the Freeholder Board and Murphy beat him, then Christie filed a defamation lawsuit against Murphy, which they settled out of court. Family events and their children’s crisscrossing paths – two other children played on the same two-person team at a recent sporting event – have helped quell any lingering inner turmoil from their drawn daggers encounter of more than a decade ago.

“The past is the past,” announced Christie, who won’t make the public the terms of their settlement. “John and I made an agreement. There is no chance that John and I would breach that agreement to remain private.”

“It’s a closed chapter… we’ve not thought about it or talked about it, and if it were to come to light, it would be a big yawner,” said Murphy.

Arguing that the issue is not him and Christie but the future of the people of New Jersey, Murphy called his old foe’s political achievement as U.S. Attorney “unparalleled” and celebrated Christie’s platform pledges to create a state auditor and revitalize small businesses.

Christie gave credit to Murphy for his 2005 run for governor in which the Morris Freeholder finished third, and told the crowd packed into the small front room that “the power of John Murphy’s personality and his message earned him fans among mayors across the State of New Jersey.”

“I want to thank John for his endorsement,” Christie said. “I appreciate it coming from the perspective of someone who has served for 12 years on a governing body that I served on for three years.”

Although Christie admitted there are “still scars” from past campaigns, scanning the eyes of both men for bitterness proved a futile exercise. There was no ironic undercurrent to Christie’s praise of Murphy for his longtime service as freeholder, or veiled suggestion of thievery when Murphy praised Christie for many of the same ideas on his website that Murphy advanced during his own 2005 bid for governor.

There were no hugs, but otherwise there was goodwill in a room that included Morris County GOP Chairman John Sette, Freeholder (and Dist. 25 Assembly candidate) Doug Cabana, Freeholder Margaret Nordstrom,Kinnelon GOP ChairLarry Casha, and Christie confidante and former Freeholder John Inglesino. The presence of the last of these, a partner in the law firm that received a federal monitoring contract from Christie whileChristie was U.S. Attorney, sparked the inevitable question concerning Christie's receipt of a letter from a U.S. House Subcommittee requesting his testimony on the issue of monitors.

Christie said he had received the letter but had not decided if he intends to tesitify.

A day after Christie’s main GOP primary rival Steve Lonegan denounced global warning as phoney science, the candidate opted against criticizing him and would not say whether or not he agrees with Lonegan.

“We have to get the DEP (state Department of Enviornmental Protection) off the backs of business,” he said, hammering his deregulation theme. “I’m going to focus on more significant issues, such as state unemployment and this economic death spiral. …I’ll let Steve scrap around on those global subjects.”

“When you run for governor, if you take a poll on the street, concern over global warming is not on the minds of a lot of New Jerseyans,” added Murphy. 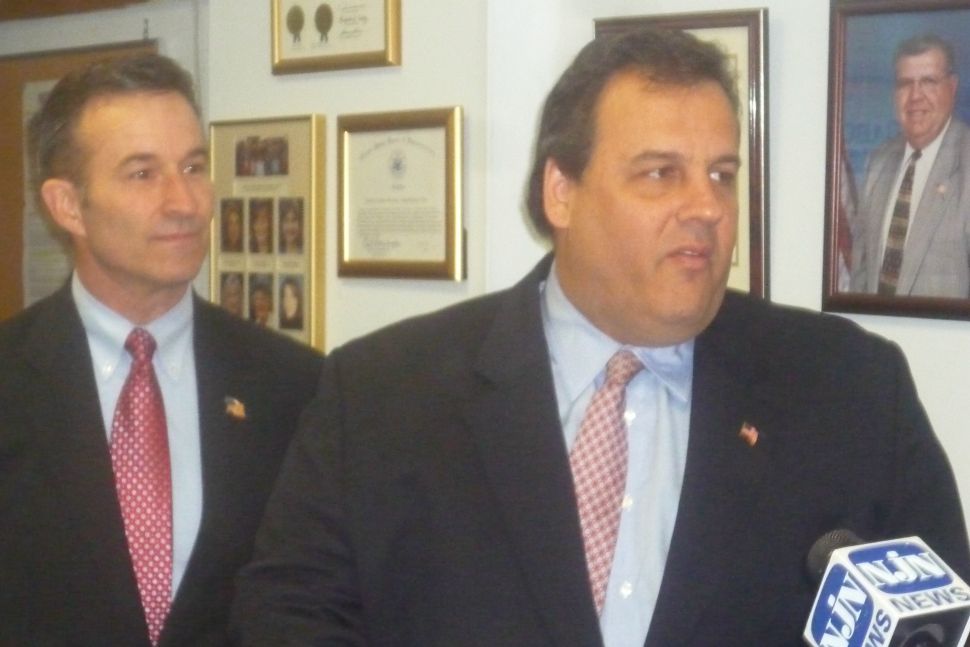