HOBOKEN – Beth Mason’s Washington Street campaign headquarters was a scene of anguish as supporters desperately tried to figure out what happened Tuesday night to their candidate, thefrontrunner in at least two early polls and the designated big money player headed into Election Day.

“We’ll take the next couple of days to assess the situation,” said Jake Stuiver, Mason’s campaign manager, helmsman of what even in the most charitable terms can only be characterized as a colossal meltdown.

Stuiver stood on the sidewalk in darkness amid figures clutching each other in devastation, trying to find or provide some comfort.

The losing candidate wasn’t ready to make an official statement but sources close to her say she feared a deepening divide in her city on learning of the results tonight. Repeatedly castigated by both the Cammarano and Zimmer camps for abandoning her reformer roots to assemble a slate of old school Hobokonites, Mason argued that she didn’t have to agree with her running mates on every issue in order to feel comfortable running with them.

But her efforts to forge her 2nd Ward supporters with the remnants of the Anthony Russo era proved politically hazardous.

A win by Mason would have substantially augmented the power of 3rd Ward Councilman Michael Russo – the former mayor’s son -who stayed out of his own run for mayor when his poll numbers didn’t add up and instead backed the councilwoman. While Russo weathers the loss with Mason tonight, the apparent runoff viability of both Raul Morales and Vincent Addeo means the councilman can still claim some measure of competitiveness.

That won’t help Mason, whose vote in favor of the Church Towers extension, a move that directly benefited Russo and Addeo, who both live in the building, cemented her new look image – in the harshest terms of her critics – as a Russo enabler.

“She threw away her base,” concluded Paul Swibinski, Cammarano’s strategist, an unflappable veteran of untold Hudson County wars, who smiled happily as he observed his own candidate conducting interviews in the back of campaign headquarters on Washington Street.

“This was big,” Swibinski had to admit.

“Cammarano began the race polling at six percent and was believed to be inconsequential,” concurred campaign manager Gary Iaccabacci, another hard-boiled veteran of New Jersey politics who credited the candidate.

“I’m very humbled by the result and happy for everyone who has been a part of this magical campaign,” Cammarano told news reporters at campaign headquarters.

Mobbed by his supporters, Cammarano said he felt there were three critical moments in the campaign, which he said started to move in his direction about two weeks ago, even as Mason headed into a nosedive.

“The first was the debate at Our Lady of Grace Church, which was televised,” he said. “The second was the endorsement by the Jersey Journal. It’s the only daily newspaper in Hudson County, and it lent a seal of approval.

“The third was staying on message,” Cammarano added conclusively.

As for Zimmer, much of the political establishment in Hudson County dismissed her as a fringe candidate who barely survived a 2007 contest with a severely beaten up incumbent named Chris Campos, a kid from the 4th Ward projects who forced a runoff with the jeweler’s wife despite chalking up a DUI arrest.

But if Cammarano barely opened his mouth on the campaign trail without reminding people that he voted in the minority for Mayor David Roberts’s 2008 budget, which, if passed, would have prevented the state takeover and the infamous 47% tax increase, Zimmer was equally zealous about running as a reformer who said all public jobs are on the table as the city assesses where to make cuts, while Mason fudged on the same issue.

When she released a studio picture of herself and her slate against a pastel skyscape, posing like the latest cast from a “Star Trek” television pilot, Zimmer prompted guffaws among traditional Hoboken operatives.

“I put together a team that stood by my vision for Hoboken,” she said tonight as she walked on Washington Street from her campaign headquarters to a campaign celebration at Park and 10th Avenue. “It starts with Hoboken and quality of life for all residents. I put together a slate that I felt cares about that.”

An hour earlier, Jersey City Mayor Jerramiah Healy stood on a stage in the Heights section of his city and declared victory with 53% of the vote, an outcome that averts a runoff election and gives Healy the option of refocusing his Hudson County Democratic Organization (HCDO) on Hoboken’s runoff.

Most insiders say it’s a given the HCDO will back Cammarano, a hard-nosed disciple of Angelo Genova, the chief go-to-guy for the Democratic Party in elections law.

“I have no idea what they’re going to do,” Zimmer said of the HCDO. “I am building my grassroots support. I had many volunteers. That’s how we did this. Getting them out and getting them involved is how I’m going to win. I seek support among those who have lived here their whole lives and those who have not lived here long.”

Even though the upper echelons of his party appear poised to enter the runoff in his aid, Cammarano provided a similar, Hoboken-centric answer.

“I’ve had no discussions with anyone at the HCDO,” he said. “We’re going to reach out to everybody.”

He said he definitely intends to extend a hand to Mason’s supporters, but as yet there have been no discussions.

Tonight, Zimmer went further in her desire to make peace with Mason.

“Yes, I would like to reach out to her,” said Zimmer. “She has a lot of good ideas and she has done a lot for Hoboken.”

If the HCDO aligns behind Cammarano, he anticipates having more money to spend for the June 9th face-off with Zimmer.

Zimmer’s campaign funds dwindled done to nothing, according to the state Election Law Enforcement Commission (ELEC) in the closing days of her campaign. While she continually underscored the voluntary nature of her efforts by definition, she acknowledged tonight that she will be reaching out for money over the course of these next four weeks.

If the Mason campaign, belly-up tonight and heartbroken, is any indication, money won’t decide the outcome of Cammarano versus Zimmer.

“Beth was the most qualified mayoral candidate in the race,” adjudged Addeo, who stood on the sidewalk comforting Mason supporters as he waited for the Hudson County Clerk’s Office to determine his own fate as a council candidate.

At least tonight, a divide persists. More than half of registered voters didn’t vote. The candidate who tried to bring together disparate forces and by so doing apparently obscured her own slogan, lost.

Not an especially brutal Election Day in the streets, there were still signs of tension.

At City Hall shortly before the last of the results arrived, as polling place workers trudged into Jimmy Farina’s office bearing cardboard boxes crammed with votes, one of Zimmer’s green-shirted volunteers spied 3rd Ward icon and perennial campaign loser Frank “Pupie” Raia milling behind the girth of a police officer assigned to block the doorway from “all loiterers and electioneers.”

“Why is Frank Raia back there?” the volunteer demanded.

Farina and his staff of clerks’ office personnel toiled in silence.

“Why is Frank Raia back there?” the man repeated in a louder, somewhat scandalized voice.

“He’s got Hoboken DNA,” a squat woman snapped finally. “Get a life.”

A guy in a Cammarano t-shirt stared squarely at the Zimmer volunteer as the latter took a cellphone picture of Raia in the room of no general admittance.

“Hey,” the Cammarano guy said, “Shaddup. It’s none of your business why he’s back there.”

There was more back and forth, but moments later, Raia broke from the room and headed out of City Hall, evidently very upset, riding another loss, although this time not his own, as Cammarano and Zimmer, having survived tonight, seek separately a way to build a unified Hoboken – and win. 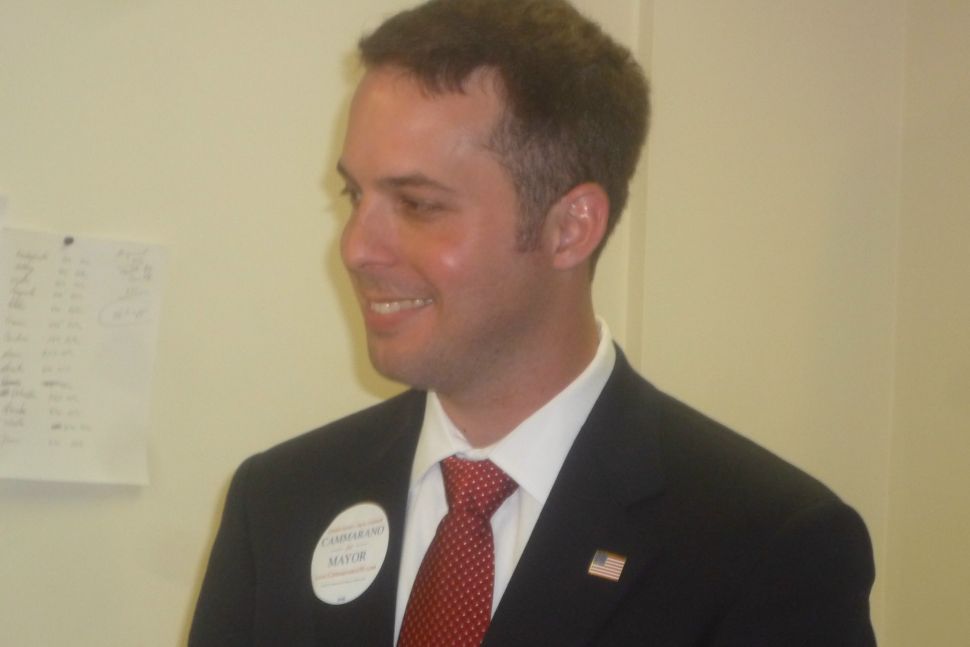