HILLSIDE – The three anti-establishment candidates for mayor presented a united front in City Hall for nearly two hours. They never mentioned Councilman Jerome Jewell – who didn’t attend tonight’s debate because of a family illness – but took turns flailing away at the local Democratic organization Jewell represents.

Then came the candidates’ closing statements and a decided crumbling of the ranks, as Bates asserted that Menza would be a good business liaison and Daniels would well fulfill the role of recreation director.

Sitting in the middle of the dais in council chambers, Menza stayed low as Daniels returned fire.

“I’ve heard a lot about walking and knocking on doors,” said the latter. “That’s what you’re supposed to do during an election year. That’s your job. The real question is, what do you do to represent the people in this town? This council has not performed to the degree required of them. But now you want them to promote you. No, it doesn’t work that way. Do what you were elected to do, and then maybe we’ll promote you.”

She’s in her freshman term on the council and Daniels had tried to no avail to get her to run with him this year. This sounded like prime-time payback.

Employing to the event’s lone prop to make a point, Daniels held up a “welcome mat” to the crowd and beckoned them to cross the threshold past a 30-year old machine figureheaded this year by Jewell.

Menza stayed out of the fray all night, reserving his ire for those in absentia.

Running as the opposition-dubbed “big bad real estate developer” in a town that everyone says desperately needs commercial ratables, and referring to himself as the “most recent piñata” as the subject of a mailer that hit today showing town hall with a real estate sign hung out front, Menza also entreated the audience assembled in the council chamber to look around at the walls, yellow or shadowed and devoid of decoration.

“It looked the same way 30 years ago,” he said. “Vote for Menza, vote for change, or all you’ll have in your pocket is change.”

The only independent in the race, Menza more than several times during the debate tonight criticized the current regime and the Democratic Party machinery engineered by party chair DeFilippo as the source of the town’s stagnation and the $7,000 average property tax debacle.

“When our football team made the playoffs last year, they had to go and play on the field in Union, and that cost $3,000,” Menza said. “Our field – I played on that field – and it looks the same now as it did then: the same goalposts, yard markers, the same divots, the same blades of grass.

“The same dandelions!” he exclaimed.

All three sounded good government themes throughout the evening as they engaged in abbreviated lovefests. They’d all champion negotiating with the council, new ratables, and consolidated services, one pension, one public job per person. Insistence on transparency? “I believe all three of us have that in common,” said Daniels.

“If any of these three candidates gets in, you’re going to see an entirely different result,” chimed Menza.

Daniels gently one-upped Bates on the issue of how to best propel Hillside development. When she suggested a more aggressive web-based marketing campaign to put the town on the cyber map – “We need to start marketing Hillside like a product,” the three-year veteran of the School Board countered.

“Everybody knows where Hillside is,” Daniels said. “The biggest problem with Hillside and development is the snafu of redtape at the front door.”

Establishment candidate Jewell’s absence elicited some cynical groans, which League of Women Voters debate moderator Hilda Jafee smothered early when she read a statement of apology from Jewell, who noted that his father yesterday was admitted to Beth Israel Hospital for type 2 diabetes and stares at the prospect of having one or both of his legs amputated.

“Say a prayer for Mr. Jewell’s father,” Daniels urged the crowd, before solemnly reminding them – and here he leveled a verbal body slam at Bates, who's spearheaded reform measures she can't get the majority to consider,as well as Jewell – “make no mistake, this council has made horrible decisions. They closed the community center on your kids and then say we have a problem with gangs.”

For much of the crowd clapping at the end for these three candidates, itamounts nowto who among them best embodies a new course. 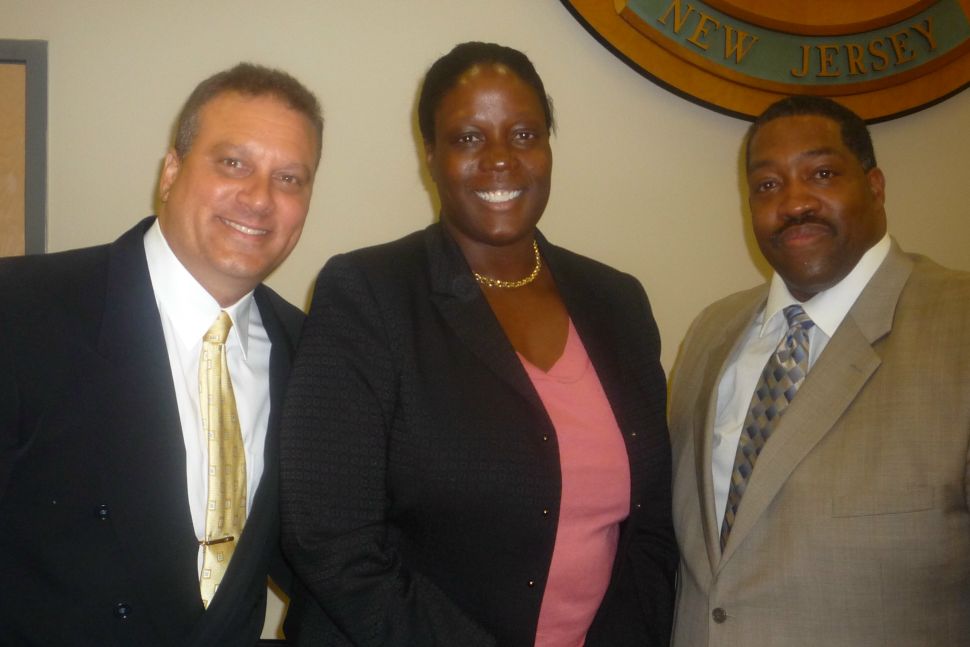