HOBOKEN – Although Hudson County Democratic Chairman Jerramiah Healy says he doesn’t want to intrude in the Hoboken mayoral runoff between At-Large Councilman Peter Cammarano and 4th Ward Councilwoman Dawn Zimmer, the party’s presence in the mile-square city may be larger than even Healy’s considerable machine capabilities.

“We’re not going to do a damn thing,” said the county party chairman, who just won re-election as mayor of Jersey City. “You won’t see me in there. I don’t know that we’d help either candidate if we went in there. I’ve certainly known Pete longer than Dawn, but we’re just not doing it. I’m conflicted because Carol Marsh is on the other team, and we have a decent relationship. All things considered, it makes sense to stay out.”

But sources in the state party say the chance to land Cammarano the job as mayor may be too tantalizing to resist in a gubernatorial election year, particularly when his opponent is scrambling to replenish her campaign coffers for their June 9th face-off.

If Healy won’t actually leap up onto a stage to endorse Cammarano, the state party is positioned to engage on the councilman’s behalf. Sources say Cammarano will be able to count on bodies, money and resources from the state party’s apparatus.

Of course, the other player in question is 2nd Ward Councilwoman Beth Mason, who has not yet said publicly who she intends to support in the mayoral runoff. Cammarano and Zimmer both vanquished Mason last Tuesday.

“I’ve spoken to her but there is not yet word from Councilwoman Mason,” Cammarano told PolitickerNJ.com.

As for Zimmer’s contacts, “We are having a meeting with her (Mason) in the next 24 hours,” said campaign manager Sam Briggs.

Zimmer has a house party fundraiser scheduled for this Thursday night.

Mason’s difficulty in determining whether she should back Zimmer or Cammarano has in part to do with the success to this point of two of her running mates, Raul Morales and Vincent Addeo.

Those two candidates – in addition to Cammarano slate mate Angel Alicea – made the runoff, and are likely to line up with Cammarano against the three candidates who naturally line up under Zimmer, her running mates: Carol Marsh, Dave Mello and Ravi Bhalla, all three of whom made the runoff.

If Mason endorses Zimmer, she will undermine the cause of her own running mates – never natural allies to begin with and the product of an uneasy alliance between Mason and Councilman Michael Russo, but teammates nonetheless. Yet if she backs Cammarano without securing definite agenda demands in exchange for the endorsement, she risks further obscuring her reformer image as an opponent of Zimmer, whose stands on the issues mirror many of Mason’s own positions. 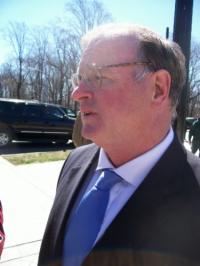