MORRIS TWP. – The pavement rose on Woodland Avenue on the last stretch of the campaign as Republican gubernatorial candidate Rick Merkt trotted beneath the shadows of trees and made the transition from Morris Township to Morristown, completing the last two of the 566 towns he traversed on foot as part of a statewide campaign effort that landed him at 2% in this morning’s Quinnipiac University poll.

If he admitted he can’t win the race at this point, the 12-year retiring Assemblyman nonetheless made the confession with a smile on his face.

“It’s the first time it’s ever been done,” Merkt said of his running effort, showing no signs of being winded as he headed up the incline, still grinning as he added, “And probably the last time it will ever be done.”

Was it a strategic mistake, huffing through all of the state’s towns while obtaining little media coverage and failing to gain traction?

“No, it’s been a great experience,” insisted Merkt. “I lost 25 pounds, and saw the great range of New Jersey’s diversity up close, which more than ever convinced me of the failure to try to create universal remedies in Trenton that are transferable everywhere.”

The best, most picturesque towns in which to run? Ringwood, West New York and Weehawken. The toughest? “Probably some of the towns in Sussex County, because of the hills,” he said.

It was Chris Venis, Merkt’s campaign manager, a horse owner, who thought he might have to put Merkt down when the latter pulled a hamstring at one point on the trail, coincidentally in view of a race track. Merkt laughed as he told the joke.

On this, his last day of running, a few photographers bearing the jangling hardware of their profession, and some print reporters, ran ahead of him, chronicling the happening.

“I’m a realist and I see the same numbers everyone else sees,” Merkt said. “But I see my campaign as a success to the extent that I have driven the agenda.”

He also believes he is the only candidate in the Republican Primary who has been honest about what he would actually be able to do as governor, maintaining his focus on changing the composition of the State Supreme Court rather than trying to sell legislative initiatives he thinks would run up against the Democratic Party’s majority.

He takes satisfaction from the fact that while he didn’t raise any money, he ran for governor at no expense to the taxpayers. Grudingly he admits that if he runs again, he would attempt to qualify for public financing.

Never enamored of old ally turned foe Chris Christie, the Republican frontrunner for the gubernatorial nomination, Merkt considered a question about whether he would run with independent candidate Chris Daggett if Daggett asked him to be his running mate.

“I’ve been a Republican my whole life," he said."It’s highly likely I would do that. I intend to support the Republican nominee. I believe in the two-party system.”

He ran into Morristown’s central business district and headed for the Green, past the fountains and the shade to the statues of George Washington, Alexander Hamilton and the Marquis de Lafayette.

“Integrity, banking and selfless service,” he said, as he eyed the three figures, standing closest to Washington, and his run was over. 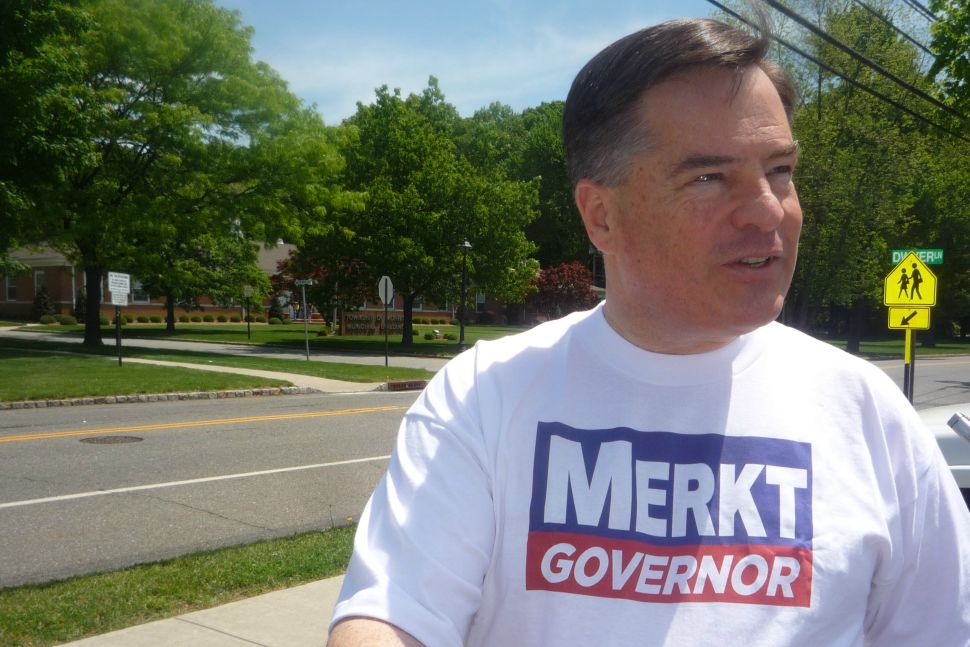