HOBOKEN – Councilwoman Beth Mason’s just left her campaign headquarters, and if anyone ever needed evidence that big money moves in and out of this narrow front door, in her absence, the candidate’s mobile face on a flat screen TV speaks to passersby on Washington Avenue.

The implication is that Cammarano represents an elongation of the now gasping Roberts era. But the larger campaign implication is just as telling from this and a constant barrage of counterpunching mailers targeting Cammarano and not Mason’s other chief competitor in a six-person field: if there must be a runoff, the Mason campaign wants to eliminate Cammarano now and deal one-on-one with Councilwoman Dawn Zimmer later.

Their fear – arguably – is the full arousal and clanking mobilization of the Hudson County Democratic Organization (HCDO).

Zimmer has the backing of veteran political operative Michael Lenz.

If Cammarano survives the runoff next Tuesday, Mayor Jerrramiah Healy – who looks like a lock for reelection – could have added incentive to redeploy HCDO forces to the streets of Hoboken, considering the renegade presence in Mason’s camp of people like Fulop fixture Jake Stuiver, Mason’s campaign manager.

“Hoping to win it outright.”

On the ground in the exhilaration of this close quarters campaign – everything’s close quarters in Hoboken, one of the most densely populated towns in the country – it’s just Mason and a skeleton crew on the move in the 5th Ward on Thursday evening. The SUV lands on 13th Street at the edge of a sloping half moon driveway under a ten-story senior citizens’ building.

Making the ascent on foot with Mason is union leader Vinny Addeo, branded early by bloggers and rival campaigners as Mason’s Russo baggage.

“We live in the same building. We’re from the same neighborhood,” Addeo shrugs as he considers a question about the 3rd ward councilman. “Look, what person in this race can claim to have run against both (former Mayor) Anthony Russo and Michael Russo? The answer’s ‘me.’”

The elevator trundles up to the top floor and it’s door-to-door now with Mason marching between Addeo and a firefighter lugging the clip board contaning the names of voters. Accompanying them is a young woman who dismisses someone’s attempt to describe her as a Latina. “I’m a mutt,” she says, just airlifted in from L.A. to spearhead communications outreach and pound doors as the requisite Spanish interpreter.

She doesn’t want to be impolite, but has slogged through two days of nearly unending Jersey rain and so doesn’t flinch when she finally admits, “L.A.”

A veteran of urban campaigns from her home state to Chicago to Philly, she brings precisely the kind of out-of-town vibe that forces howls from Mason’s down home detractors, but another factor quickly becomes evident as she works overtime those Latino pockets that add up to 20% of the population here… “She’s good,” observes Addeo, while the short-timer makes the Mason case in broad, bold Spanish strokes with sparkling eye contact in one door frame after another.

Mason, who heads a ticket that includes Raul Morales for city council and some quiet support generated by Assemblyman/Councilman Ruben Ramos, wars for Latino votes with Cammarano, who runs with Angel Alicea.

Just before she closes the sale with one woman, the LA operative presents Mason. “Que bonita, la rubia,” the senior citizen exclaims. She and Mason have the same blonde hair, and when the door closes, it appears to be a closed deal. Another woman, a Chilean, says she would vote for Mason because the councilwoman resembles Michelle Bachelet.

They break out another floor. They head for the stairs. They’re working.

News earlier in the day that the councilman fingered Mason’s campaign for dragging his personal life into the contest provoked Mason’s condemnation of the blog piece that broadcast the attack, followed by her campaign manager’s denial that the piece originated from their campaign, and then head-down, back to work pavement pounding.

But beyond who specifically drilled Cammarano, both Cammarano’s and Zimmer’s allies see their big money rival’s attack mode in mailers not as overwhelmingly effective force, but as evidence of some inner unrest in camp Mason.

The members of Cammarano’s Platform Committee who today stand with the candidate in front of City Hall as he hands out eight broad sheets of his Hoboken agenda are young urban professionals, a handful of them born here, but most proud transplants. There’s even a leashed bulldog present as if to underscore that they mean business. Whatever future power Cammarano may be able to wield with the HCDO backing him in the runoff is absent now as his young, apparently idealistic allies argue on his behalf.

“How many votes you good for?” someone snaps at Cammarano diehard Jason Maurer.

“I’m good for one vote,” Maurer says. “Peter gives us the best chance to move forward. I’m so convinced of that that I’m willing to commit to working for him 20 hours per day. All I can do is share my views and try to get others to participate.”

They are confident in their lower keyed ground game, just as Zimmer, who trumpeted the anti-establishment Kids First school board candidates and provided them with her headquarters as a base of GOTV operations, believes she can – on the flank opposite Cammarano – rightfully claim the mantle of reformer.

Whatever homespun and self-professed intellectually superior machinations Cammarano and Zimmer believe they can muster, Mason has the enormous edge in money and so has the town square megaphone in the form of ads, mailers, and television – all worthless, her opponents insist, as she broadcasts a muddled message, and day by day melts down into the Hillary Clinton '08 of Hoboken.

But as she hits another flight of stairs in the middle of a jammed schedule of events with five and fast becoming four full days to go before D-Day, alongside some young woman from L.A. and Addeo who grew up here, Mason’s working on all fronts. Right now, she’s the biggest machine in town. 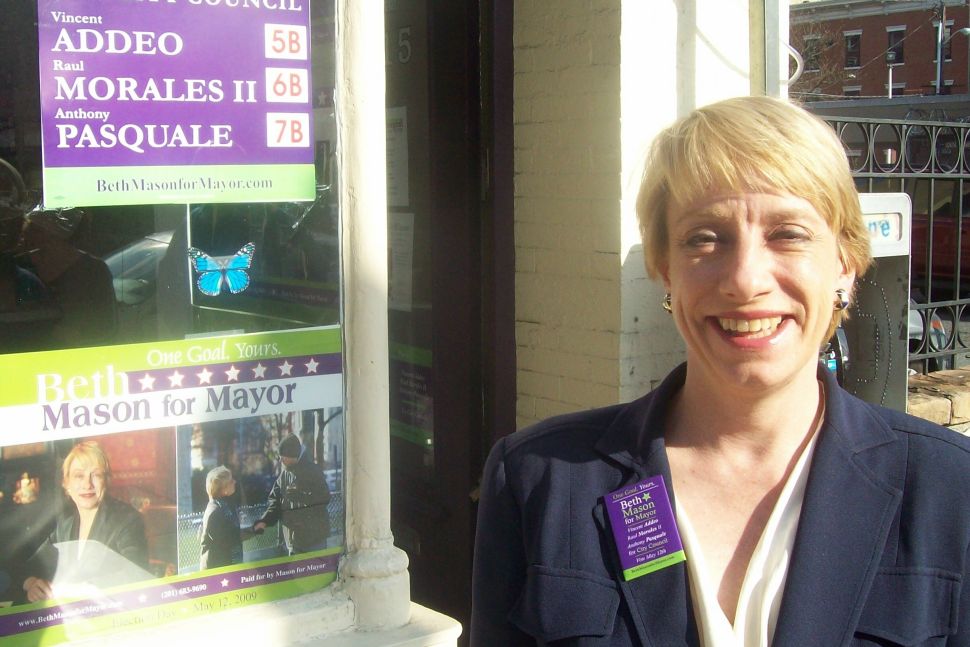