MANHATTAN – Days before a House Judiciary Subcommittee launches hearings on the subject, legal experts at an event hosted by New York University’s School of Law considered whether sufficient checks and balances govern the process by which federal U.S. Attorneys select federal monitors to oversee deferred prosecution agreements (DPAs) of corporations.

They also assessed in general the role of politics in prosecution, both at the state and federal level.

“No one should be exercising power without appropriate constraints,” said Michelle Hirshman, a former Assistant U.S. Attorney for the Southern District of New York – but how the government would implement depoliticizing changes to federal monitoring contracts remains a question mark as Congressional lawmakers prepare for hearings.

The multi-paneled discussion unfolded against the backdrop of a gubernatorial bid on the other side of the Hudson River by former U.S. Attorney Chris Christie, who during his tenure as New Jersey’s top cop appointed former Attorney General John Ashcroft to a no-bid federal monitoring job potentially worth up to $52 million.

That appointment, and others, fueled a belief by Democratic Party members that Christie, a Republican, politicized his office.

“The Christie episode was the catalyst to a consideration of new principles,” said panelist Gil Soffer of Chicago, a former federal prosecutor.

In the world of post-Enron implosion, the argument for DPAs as an instrument to bring large-scale corporations into alignment with the law rests largely on the idea that such corporations are big and financially complex and as such necessitate monitors with special expertise, both in the areas of prosecution and in business.

“I’ve worked as a monitor, a judge, and as a U.S. Attorney,” said Debra Wong Yang, appointed by President George W. Bush in 2002 to serve as U.S. Attorney for the Central District of California. “When I was a monitor, there were things that I saw, which I wouldn’t have red-flagged but for the fact that I had prosecuted fraud cases in the past. But to the idea that a judge, for example, would be able to monitor a large-scale corporation, it’s not realistic. Some judges have dockets with 500 cases they don’t have time to oversee.”

Prosecutors alone are ill-suited to make judgments, said Wang, who fears that over-regulation of monitors by an ad hoc committee could inhibit the flexibility of how they perform their jobs.

Panel members acknowledged that to date, prosecutors frequently answer skeptics who question their appointment of specific federal monitors with political ties by arguing that unless the U.S. Department of Justice had pursued and secured charges, there would be no process of retribution for entities to begin with – entities such as Zimmer Holdings, a medical supply company which perpetrated Medicare fraud, and which prompted Christie to give Ashcroft the monitoring contract.

But Vikramadita S. Khanna, professor of Law, University of Michigan Law School, who last year completed a study of 36 monitoring contracts, said there are no identifiable principles currently in place that ensure the integrity of the deferred prosecution process.

“Firms are not always willing to express their views (about their internal problems or departments trying to address fraud), so it’s hard to know how assignments are going because we don’t know what’s going on,” said Khanna.

Moreover, the intensely competitive world of prosecution, fueled by the higher-office ambitions of those seeking high-profile convictions, creates political pressures and opportunities for prosecutors that may cause them to teeter irretrievably into the area of over-politicization.

“People looked at the press coverage Spitzer was getting and they wanted to play too,” said Wells. “So the presumption of collective competence breaks down because everybody wants to play, and in many cases now you have a system of regulators that is not made up of individuals who have a wealth of experience.”

Rachel Barkow, a professor of criminal law at NYU, pointed to an incident in Oklahoma in which a state attorney general soft-pedaled punishment for Wal-Mart in exchange for Wal-Mart’s promise that it would create more area jobs, earning the AG greater popularity among constituents.

“The happier side of the story is that elected attorney generals at least are held accountable by the people, although it might not always result in the most rational approach,” she said. “There may be too much short-term political gain versus long-term public good.”

Speaking directly to the issue of federal monitors, both U.S. Rep. Frank Pallone (D-Long Branch) and U.S. Rep. Bill Pascrell (D-Paterson) appeared briefly between panels, arguing for the passage of their “Accountability in Deferred Prosecution Act of 2009,” which would restore judicial oversight of DPAs, remove the selection process of federal monitors from U.S. Attorneys, and require full disclosure of DPAs with quarterly reports.

“We obviously believe there needs to be regulation and guidance from the Justice Department beyond what there is now,” said Pallone. “One of the reasons I believe this conference is so important is because you’re looking at an issue from a legal perspective – an issue that inevitably gets mixed up with politics.”

Pascrell was less diplomatic in his public assessment of DPAs, which he said have essentially morphed into protection plans for corporations. “My conclusion is, ‘Go and sin no more,’” he said.

There was nervousness in the room, a fear that part of the governor’s race from the other side of the river had suddenly spilled into the auspices of what Anthony Barkow, director of the school’s Center on the Administration of Criminal Law, had hoped would be a nonpolitical event.

He hovered near Pascrell, who railed at the podium to a discomfited New York audience.

Barkow, who organized and hosted the event, later said DPA news stories spurred him to convene the conference.

“There was a front page article in the New York Times on federal monitors, and hearings in the House,” Barkow said. “I felt it was an important issue for an apolitical organization such as ours to undertake a reasoned discussion.” 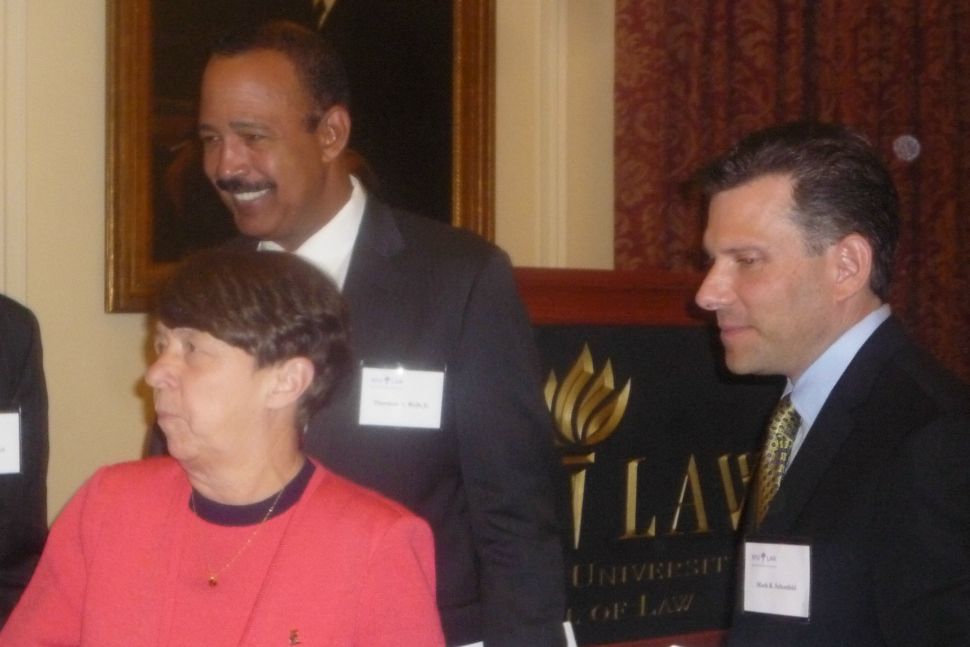