In recentyears, afewinter-party contests stand out as wars, and as George W. Bush's numbers threatenedto flat-line in New Jersey, Democrats felt a surge of confidencein Monmouth County, where they ramrodded GOP excess and Bush backlash into annual wins on the freeholder board and a Senate victory by Ellen Karcher forterritory that could be described as leaning in their favor butfinally uneasy.

2007 proved the Democrats'penultimate chance to squeeze as muchcitizen angst as possible out ofthe GOP's control ofMonmouth and Bush'sperceived deepsixing of his own party, and nowherewas the countervailing intensitybetter demonstrated thanJennifer Beck's challenge of Karcher in the 12th Districtand, in less publicized if no less intense fashion,Kim Guadagno'sbattle with Belmar Police Chief Jack Hill for a vacancy at county sheriff.

Both women won -Guadagno narrowly – and in the process earned reputations as tough, well-preparedcampaigners.

Consequently, at various stages of Chris Christie's journey as a Republican gubernatorial candidate, Beck and Guadagnohave been mentioned in GOP circles as potential candidates for lieutenant governor, withthe former'sname surfacingas early as last summer while Christie was stillU.S. Attorney, then fading for the most part; and Guadagno's coming louder late in the process here.

If the potential LG candidacies of Bergen CountyClerk Kathe Donovan andstate Sen. Diane Allen (R-Burlington) have generatedmore ink than either Beck's or Guadagno's, the latter two share an advantage of having weathered some of the most brutal and competitive dynamics of recent Monmouth Countyelection history.

While not as glamorous and ubiqutous that year,the Guadagno-Hill race was about as hard-boiled as any Republican-Democratic contest of this decade, with Monmouth County Democratic Chairman Vic Scudiery enamored of Hill's blue collar candidacy and Republicans equally exhilarated by Guadagno's thickset resume, which included prosecutorial background,jobs as assistant state Attorney General and assistant U.S. Attorney, and a professorship at Rutgers-Newark.

Now Guadagno has emerged as a legitimate shortlist LG candidate, according to Republican insiders.

"Christie is ten points up in the polls, andat this point he doesn't wantsomeone who would hurt him," said a GOP source. "Kim Guadagno is someone he knows,someone he's worked with, andshe's faired very wellduring the vettingprocess."

During the Republican Primary, she told PolitickerNJ.com that she is focused on her job as sheriff andwould not respond toquestions about lieutenant governor.

But it's Guadagno – who during her 2007 campaignchampioned the federal deputization of local law enforcement officials under the provisions of 287(g) of the federal Immigration and Nationality Act – getting the late-in-the-gameinsider LG buzz as Christie sizes up his options.

"I've met her and heard her speak and she seems to be a Reagan consevative," said Assemblyman (and state Sen.-elect) Mike Doherty (R-Washington Twp.)"It's the message of the person at the top of the ticket which is going to win the governor's race, butcertainly the sheriff makes anattractive candidate."

"Ithink Kim would be fantastic.Basically she's chief executive officer andhundreds of people report to her," said Kean. "She's a very capable individual, hasa great sense of humor, and she'sattractive physically, which doesn't hurt in politics. We need a big number out of Monmouth, which is why Kim or Jen would be great for the Christie ticket.

"Iwould be thrilled if it wasKim or Jen, but if either of them becomes lieutenant governor, we wouldalso have to be thinking about keeping that senate and sheriff's seat," added the senator, ever-conscious of the warzone Monmouth has been over the course of these recent years.

If there is an obviousdownside to Guadagno, besides the possibility that she might project too much conservatism for what is ultimately a blue state- and this from GOP insiders – it's that herlaw enforcement profile mirrorsChristie's professional background, whicharguably wouldn't provide the bestconfidence builderfor a party looking to prove its economic know-how during this nationall recession.

But Republicans still smarting over the back-to-backmeltdowns of Anne Estabrook and Andy Unanue as statewide candidates look at an aggressive andtested winner like Guadagno, who held Republican territory in a hard election year, and they aren't surprised when the word is she's holding her own through the LG vetting process. 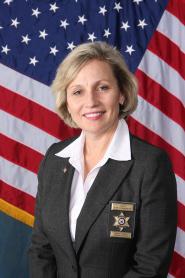