TRENTON – Questions abounded about the delays leading up to state Senate President Richard Codey (D-Roseland) gripping the gavel and convening the budget session a little while ago.

Had state Sen. Nia Gill (D-Montclair) wandered off, forcing Codey to turn to the GOP to summon another vote?

Sen. Ray Lesniak (D-Elizabeth)had questions aboutthe ENCAP bill and its relationship to the federal stimulus bill, which was the chief reason for the delay, according to sources.

"The amendments took out part of the urban hub but left in the residential residential section of urban hub and also left in ERGG," explained the veteran senator. "I disagree with those who believed it will stop job creation under the economic stimulus bill.

"It applies, since ENCAP was a grant abd ERGG is gap financing where the developer has the primary financing in place," he added.

Buono has been here before, but this particular budget soliloquoy carries ready-for-close-up connotations.

"The economic forces driving down our revenues are being experienced nationwide," says Buono, who argued that the budget did not commit the state to an over-reliance on tax hikes.

"Do not vote for a spending plan that uses moreirresponsible gimmicks than any other in history," argues Bucco. 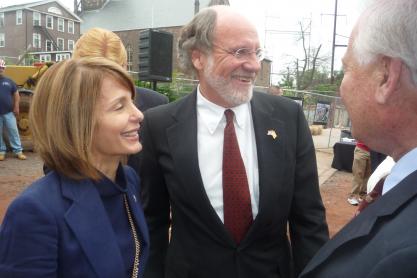