Donovan, a five-term County Clerk, is said to be near the top of Christie's shortlist for the state's number two spot. And while standing in front of a group of elderly voters at a senior center, Christie dropped what initially sounded like a hint about a Christie/Donovan ticket.

But when asked to elaborate on the comment by a reporter, Christie walked it back, repeating previous statements that Donovan, along with several other potential running mates, would make a good choice, and that he would take his time making the decision.

No Republican has ever won a statewide election without carrying Bergen County, a point that helps Donovan, who was the top Republican vote getter when she ran for re-election in 2008. A former Port Authority Commissioner and GOP State Chairman, she represented heavily blue collar and politically competitive South Bergen in the State Assembly after ousting incumbents in 1985.

Christie, however, downplayed that speculation, arguing that voters would choose based on who is at the top of the ticket.

"I don't think people go into the voting booth and say ‘I don't really like Chris, but I like Kathe, so I'll vote for him and maybe he'll die,'" he said.

Donovan, while not saying anything groundbreaking, expressed a willingness to join a Christie ticket.

"It's up to the candidates to decide. You've got to look at my record and what I've done, and it's Chris's decision as to whether I'm up to the job," she said.

Donovan is not the only Bergen County woman being considered for Lieutenant Governor. State Sen. Loretta Weinberg (D-Teaneck) is by most accounts at the top of Gov. Jon Corzine's list.

With the corruption trial of former Bergen County Democratic Chairman Joseph Ferriero trial set to bump up against the governor's race, Weinberg – who was Ferriero's chief critic during his time at the helm – could provide a counterpoint to Christie's corruption busting message. Christie, however, didn't think that Weinberg would temper any blowback from the Ferriero trial.

"Did Joe Ferriero during his time here look restricted or restrained? Loretta may want to take bows for that, but I don't think he was restrained. I don't think there was any doubt who ran Bergen County's Democratic organization, or who controlled many of its public officials," he said.

The campaign stop was a short one. Originally planned as a tour of downtown Rutherford, rain showers forced Christie and Donovan to limit themselves to a stop at a senior center and a breeze through a diner.

At the center, Christie told a group of about 20 people that they should not trust any campaign that focuses exclusively on trying to tear its opponent down, noting how Corzine had already unleashed two negative cable ads and the Democratic Governors Association ran ads meant to help his primary opponent, Steve Lonegan.

"[Corzine] is going to try to make me look like Rosemary's Baby in the next five months," he said. 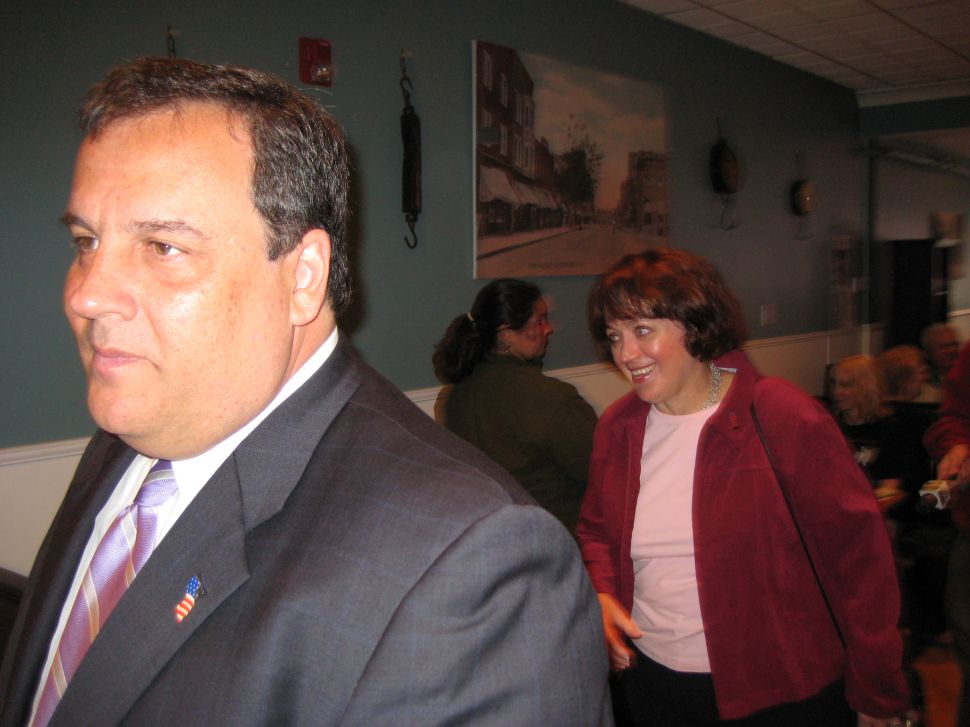