NEW BRUNSWICK – While the national mediamay fixate on the Obama implicationsof what happens here on Nov. 4th, Gov. JonCorzine said the voters ultimately will decide whether or not to re-elect him based on local, New Jersey issues.

The governor said the narrative of his effort to make $4.4 billion in absolute cuts stands in contrast to what he hears as GOP fulminating as he attempts to fight off Christie in this general election.

"I heard a lot of generalities and non-specific discussions in the Republican Primary about what needed to be done," Corzine said.

Having vanquished movement conservative Steve Lonegan in that primary, Christietwo days ago criticized Corzine as a "timid" leaderfor reaching asettlement with Communications Workers of America (CWA) workers in the leadup to an appearance by Vice President Joe Biden.

Obama's number twofearedhaving to cross a union picket line on his way in to back Corzine at the governor's re-election campaignlaunch.

Christie said under his administration "there would have been layoffs."

"He's disconnected from the reality of what a contract is all about," said Corzine, arguing that the 7.5% overall salary lossthe CWA employees would sustain in exchange for a pledge of no-layoffs through 2010 is "pretty remarkable."

"His comment that it's rolling it into the future is just nonsense," said Corzine to Christie's charge that the tentative deal would handcuff a future governor to what the Republican sees as Corzine's too generous concession to the state's largest public employees union.

"My concern is will it actually be accepted in the vote," Corzine added of the deal.

Estimated by the governor's office as a generator of 3,000 jobs before its completion in 2012, the mixed-use development project here in New Brunswick anchored by a Barnes and Noble Bookstore, 245,000 square feet of residential space, and 50,000 square feet of office space,epitomizes smart growth, in Corzine's words.

"The Gateway project is a testament to how state and local partnerships with the prviate sector can create significant investment in our cities," he said. "…Projects like this are vital to keeping our economy moving in the right direction and providing jobs for our hardworking residents."

Sitting among anaudience that included New Brunswick Mayor James Cahill, state Sen. Barbara Buono (D-Metuchen) attended, she said, "to celebrate the success story of a city that has pulled itself up by its own bootstraps."

A short-list candidate for lieutenant governor, according to Democratic Party sources close to Corzine, Buono either clerked or practiced law in New Brunswick for 18 years.

"I'm a couple of weeks away from that (making a decision about LG)," Corzine told reporters.

Standing on the outdoor worksite nestled up against the New Brunswick Train Station, Cahill described a future scene in which even "a mayor can get a cup of coffee and enjoy a good book, perhaps joined by a governor who jumps off the train from Trenton."

A combination of patrol car radio buzz, incessant passenger train rattling above and ambulance screaming on Easton Avenue rendered the bulk of public remarks a well-staged inaudibility for nearly everyone but the brace of elected officials installed in the front rowdirectly in front of the podium and shovels-at-the-ready construction workers standing beside a heap of dirt.

Ever since the closed-doors, election yeartalking-to administered to the governor by party heavyweights urging him to at the very least appear animated, most of Corzine's public remarkshave been charged-up battle cries, but on this occasion, bad acoustics virtually nullified the governor's voice and shrank his performance into a podium mime act.

A passing train mostly drowned out Cahill's homage to Corzine, which included the observation that Corzine as governor "has rolled up his sleeves and grown our economy to attract and create new jobs."

A maroon kitchen, bath and sidingvan passed in the middle of the governor's speechwiththe driver half hanging out the window. "Vote for Christie," hescreamed, grumbling curses as his head disappeared into the cab.

Later, Corzine grabbed a shovel and posedwith Cahill and others beforeslinging theceremonial firstshovelful of dirt to kick off construction of the Gateway project. 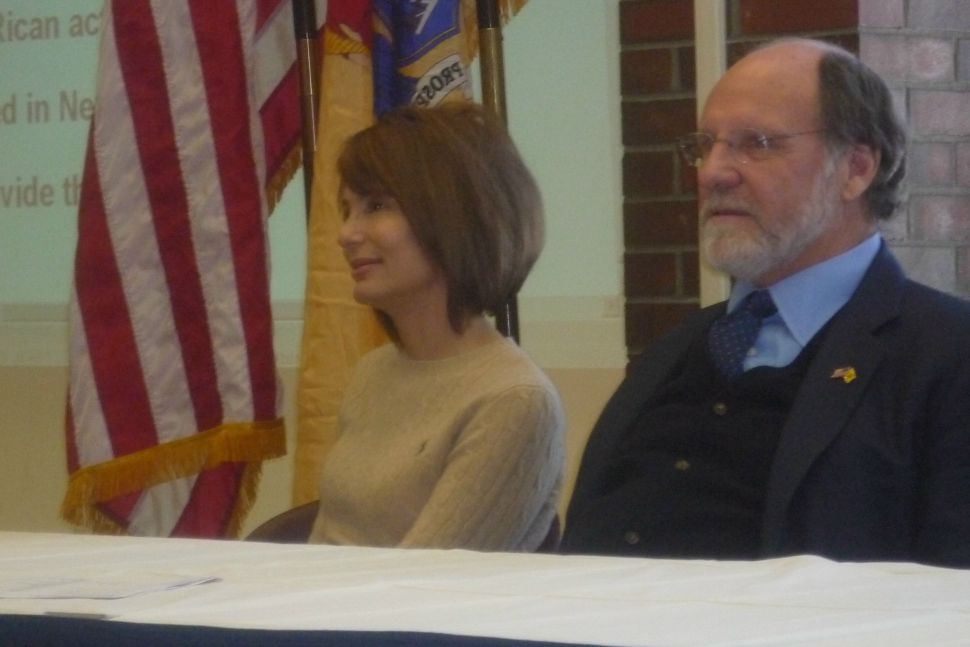