SAYREVILLE – It looked like rain would obliterate this event the second time the crowd scattered, either for the refuge of the main tent or the parking lot.

But the madcapped exodus out of there didn't deter those who stayed at the St. Stan's Church Carnival, among whom numbered Gov. Jon Corzine, Assemblyman John Wisniewski (D-Sayreville), and a small entourage of Democrats conscious of making retail contact as the governor struggles to breakout of a mid-summer double digit deficit against GOP challenger Chris Christie.

"Sayreville is a good bellweather of New Jersey, it's a Democratic town but it's conservative," Wisniewski said of this riverside Middlesex community, population around 40,000, with 9,324 Democrats and 2,503 Republicans,where voters have enough ofan independent streak tokeep a Republican mayor in charge.

"This is the biggest event of the summer," added the chair of the Assembly Transportation Committee, who on more than one occasion quibbled with Corzine on policy, but who voted for the governor's hard luck $29 billion budget on Thursday and is now committed to reelecting him.

The men gnawed on ribs, sampled ethnic cuisine from a menu that included pierogi and kielbasa, and bellied up to the beer stall.

"The more of these things youcan get me to, the better," Corzine told Wisniewski over the crack of toy Tommy guns shredding targets at a booth manned by a handful of some 400 St. Stanislau's volunteers who organize the carnival for their church, one of three Catholic parishes in Sayreville.

This was one of a full complement of such campaign stops the governor was scheduled to attend this weekend, including the annual JerseyCity Egyptian Festival,a Hindu Chariot Festival of Lord Jagannath in Wayne, and the San Juan Bautista Parade in Camden.

Notwithstanding the anecdotal outpouring of local love here, Corzine's decision to appoint Middlesex County Democratic Party Chair Joe Spicuzzo as head of the Sports and Exposition Authority, and his continuing flirtation with the idea of state Sen. Barbara Buono (D-Metuchen) as his candidate for lieutenant governor,indicatehis attentiveness tothis Democratic stronghold wherehe defeated Doug Forrester in 2005, 56% to 39% but where he tried unsuccessfully to sell his toll roads plan, and scored an underwhelming 67% of the June 6th primary vote.

"Low turnout was a function of the fact that the governor was running against unknown candidates," said Wisniewski. "The primary focus was on the Republicans, where there was a real race. There wasno Democratic Party buzz in theprimary."

Corzine arrived in Sayreville on Friday evening as the rain loosened. He walked under the ferris wheel into the crowd swelling the main tent and promptly went into grip and grin overdrive.

"I want some sauerkraut," the governor exclaimed and seconds later a hotdog appeared in his hand generously laden with the condiment and a lowundercurrent of boos could be heard as he waded in, but mostly blue collar goodwill greeted him, even as he immediately came face to face with a consternated Katherine Jurkiewicz.

"Why are you cutting $4 million out of the EMT training fund?" the Sayreville resident wanted to know. "This is something that impacts every volunteer EMT in New Jersey."

The governor took his time. He said it's not happening. The money's in the budget. She shouldn't be worried.

"The full appropriation's there," insisted Wisniewski. "It was $2 million, and another $2 million was added."

If the polls show a free-falling, flailing incumbent, the governor acknowledged that getting out of budget season will give him the chance tobetter make his case. "The campaign will have to change with perspective (on the budget)," said Corzine. "We have made difficult choices to help the middle class, but in time the public will recognize it."

"Of course, I'm going to vote for him," she said. "I've voted Democratic my whole life."

Observing the candidate gleefullywrap his arm around someone's head in a gesture of affection,an insider said, "People are going to have to feelsome tangible benefit from his economic stimulus package beforeElection Day. But the fact that he's coming out here like this is important. People think he's a stiff, but he's not. He's a nice guy who projects warmth and concern and people like him."

Not to be outdone by the trappings of Polish culture evident everywhere, an Irish bagpipe outfit – D.B. Kellypipes and Drums of Middlesex – slogged across the mud flats and briefly took charge of the terrain.

Corzine's presence near an outcropping of tents composing the beer garden brought forward an animated supporter.

"All right, come on, Jonny boy, get in there and kick Christie's butt," said John Thasitis, a steamfitter with Local 475.

Of course, Christie's never far from these proceedings.

His Thursday testimonybefore a House Subcommittee in Washington, D.C. about his role as U.S. Attorney in assigning no-bid contracts ended when he abruptlyleft the committeechamber with the argument that he had fulfilled the time as promised. "Please be advised that I must leave the hearing by 1:30 p.m. to attend previously scheduled commitments I have in New Jersey," Christie had written in a June 19th letter to HouseJudiciary Commitee Chairman U.S. Rep. John Conyers(D-Mich.).

But "I was shocked that he got up and left the way he did," said Wisniewski. "The Metroliner leaves every hour, and I'm mystified that he would use a train as an excuse to avoid the opportunity to provide full disclosure about deferred prosecution agreements."

On Friday in Sayreville, the governor took an hour -lingered by the massive outdoor grill, worked the booths, the ride lines,the tables, the area around the 50-50, and thenleft, done with campaigning for the night. 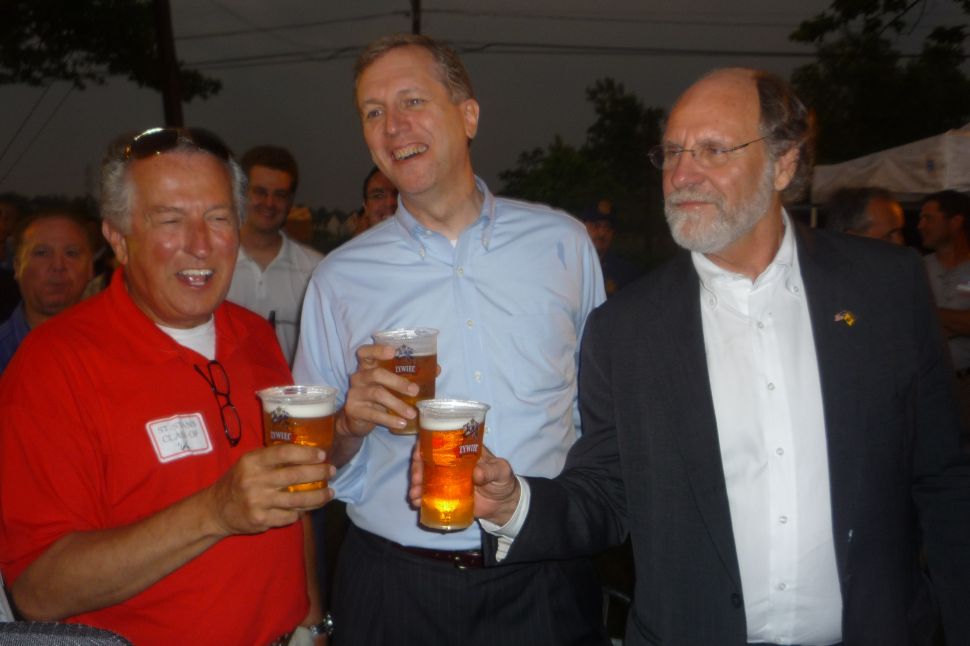