BELMAR – Campaigning at the Belmar Seafood Festival on Saturday, Chris Daggett said Chris Christie's refusal to pursue an endorsement by the New Jersey Education Association (NJEA) and Gov. Jon Corzine's deal with the Communications Workers of America(CWA) epitomize entrenched problems with the two main parties and augmentthe argument for his independent gubernatorial candidacy.

"Absolutely I will ask for their endorsement," Daggett said of the NJEA, whichhas a membership of 200,000. "We have a number of positions that may be different, but my view is you have to engage people, and I'm happy to do that.You have to engage your opponents and your proponents. This is not about the NJEA or me, this is about New Jersey, and being governor requires a conversation with a broad range of people."

"He's like Jon Corzine, he has no experience in this area," said Daggett, moving with his small campaign staff in acrowd at the festival.

The candidate believes Corzine's CWA deal tinkers at the edges of the state workers' problem, and agrees with Christie that the Democraticgovernor's pledge not to lay any of them off at least through 2010 simply pushes the problem forward.

Daggett lambasted what he sees as Christie's lack of specificity, including Christie's own statement that he had been governor, he would have laid offstate workers. The real cost drivers are pension and healthcare costs,aid to education and salary increases at all levels of government, said Daggett.

"Christie's vow to lay off state workersdoesn't at all address the question," said the independent. "If you consider the $2 billion hole in the budget and you figure that the average state worker makes $50,000, you'd have to layoff 40,000 state workers to make that up. You're not going to do that."

Daggett's main argumentoffered to voters here as part of his ongoing beach walks is that asboth a private and public sector person he assembled a record of being able to work with divergent groups to solve problems – including beach and waterway cleanup.

In this case, neither shackled to the unions'political machinery nor staked out against them, he believes he is the only candidate running whohas the flexibility to negotiateand secure greater contributions by incoming workers to pension and healthcare benefits at all levels of government.

"We do need change," he said. "We simply can't afford anymore to pay what we pay now for someone who retires at 45, for instance, and lives to 85."

Still amassing the dollars he needs to qualify for state matching funds at the end of this month, Daggett saidhehas exceeded the $340,000 requirement, at least in terms ofcommitments or pledges made by his supporters. He and his campaign are now in the accelerated stage of collecting those pledges, he said.

Beginning on Memorial Day,Team Daggettbegan a projected summer-long series of campaign beach walks, starting in Cape May. Since then, the candidate walked in Wildwood, Ocean City, and now Belmar. Next week, he heads south again, to Atlantic City.

InBelmar, it's evident early that most people here would rather dive headlong into a plate of crabmeat than consider the finer policy points ofan onfolding gubernatorial race five monthsremoved from Election Day.

"I go by the candidate, not the party, andsometimes I vote for whichever party's not there justto shake things up," Peggy Mirabelli of Jackson told Daggett."I'm hearing a lot about Chris Christie on the radio – 101.5 really likes him."

"You're not listening to the same 101.5 I'm listening to,"Daggett saidwith a grin. "They beat Christie up in the primary and mostly supported his opponent, Steve Lonegan. And they talk about me as a credible opponent."

The former DEP commissioner criticized both Corzine and Christie on the environmental front.

"The governor has cut the DEP budget while not dealing with regulatory and statutory challenges, and he has allowed appointments to boards and commisions to languish," Daggett said. "Christie wants to cut the DEP and break it up. He wants to take Fish and Game out of the DEP, but where does he intend to put it? How can you do that and cut taxes at the same time? They both want to cut the DEP, but if you have two permit writers with 40 permits, and you cut one of those permit writers, now you have one permit writer with 40 permits. All you've done by cutting is increase inefficiency."

A former Republican who backed Barack Obama for president, Daggett said he is generally pleased with the new President's performance.

"He has reached to engage people more than other people have in that office, and that's a positive, but I am disappointed with the economic stimulus package, which created a lot more pork and earmarks and increased our debt burden," Daggett said. 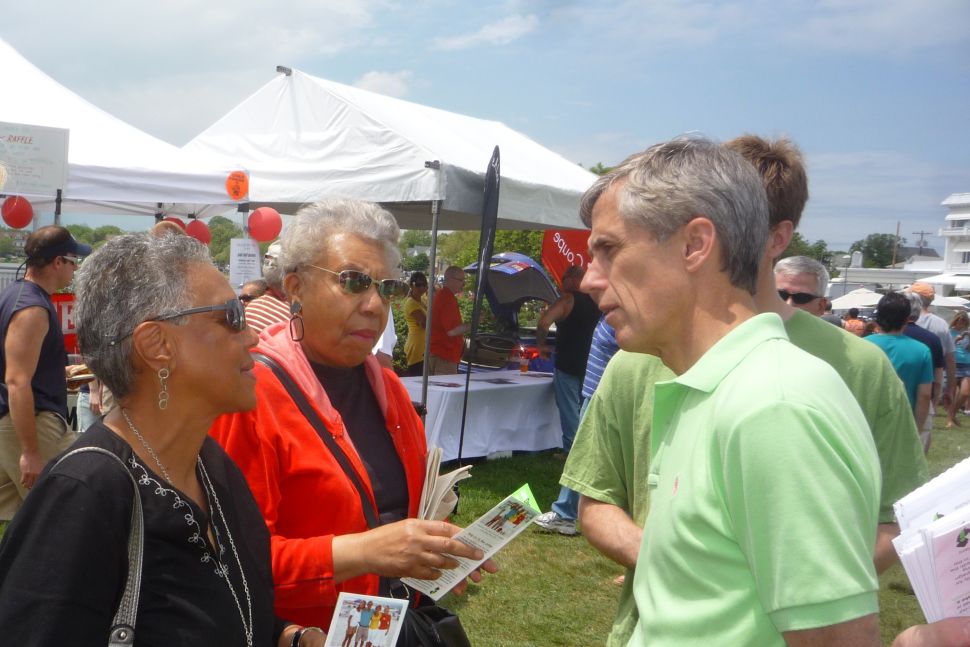