The three Republican chairmen from the counties that make up the 1st Legislative District will hold a conference call this afternoon to figure out the process to replace former Assembly candidate Frank Conrad.

Citing business obligations, Conrad dropped his candidacy over the weekend. Ocean City GOP Municipal Chairman John McCann immediately made a play to fill his spot, getting the endorsement of running mate Mike Donohue. He's also been endorsed by party officials from Cumberland and Atlantic Counties whose towns are in the district. But McCann isn't a sure thing just yet.

"I've heard some rumblings about it, but I can't put any substance behind it because I haven't heard from him directly," he said.

In an email to PolitickerNJ.com, Conrad denied an Inside Edge report that his decision to drop out had anything to do with not getting along with Donohue.

"At no time was there ever any problem between me and Mike Donohue or [Campaign Manager] Peg Emberger. Mike and I were a winning team and we have been and will remain friends and political allies," he said. "The fact that people operating on behalf of our opposition are taking shots at Peg and Mike just proves that these are people who know how to win."

This southernmost district in the state is dominated by Cape May County, though Cumberland County makes up a significant part of it, with the towns of Maurice River, Millville and Vineland in its confines. Atlantic County contains a much smaller portion of the district.

Putting a viable candidate in Conrad's place is extremely important to Republicans, who view the district as their best pick up opportunity this ear. Democratic incumbents Nelson Albano (D-Vineland) and Matt Milam (D-Vineland) are thought to be particularly vulnerable because of the district's traditional Republicanism, Governor Jon Corzine's upside down poll numbers and the absence of moderate state Sen. Van Drew (D-Dennis) — and thus his coattails — from the ticket.

Greco said that Republicans should "act promptly" to fill the vacancy, but Cape May County Republican Chairman David Von Savage – who was out of town on Friday afternoon, when the news of Conrad's decision started to spread — cautioned against moving too quickly.

"Things seem to be moving quickly, which I understand the necessity. However, there are county committee people and leaders that need to be formally incorporated into the process to stake out procedurally what we're going to do and open it up," he said. 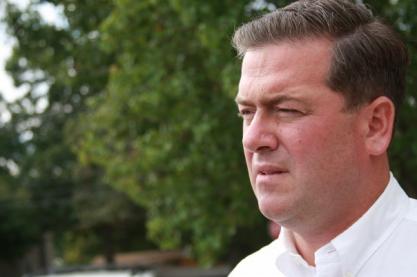