PERTH AMBOY – There weredays over the course of her first yearin officein whichMayor Wilda Diaz wondered whether she could run Perth Amboy for a full four years.

She began to get a deepening sense that the problems were too entrenched, the solutions too troublesome and, in some cases,too hurtful to the people.

Her 2008 grassroots take-down of City Hallfixture Mayor/Assemblyman Joe Vas proved to be but the beginning of an ongoing and intensifying drama in which Diaz and her administration uncovered an inherited $10.6 million budget shortfall and helped state and federal authoritiespull togethera corruption case against Vas.

"On this stage last July I could never have envisioned that we would discover a financial crisis so deep, or a web of tangled deals so wide," Diazsaid tonight in her first state of the city addressat Perth Amboy High School, where she attended school and graduated.

Once running and now continuing to insiston honest and open government, the new mayor in this first year enacted unpoplar measures to reverse course on a localmiasma made doubly injurious on residents here by a nationalrecession. Her policies have included a 26% tax increase, water rate increases, wage freezes and layoffs of municipal employees.

"These hard choice – these difficult decisions – have been made for the long-term financial health of our community, so that there is a City of Perth Amboy for our children to grow and thrive in," said Diaz, who in the speech repeatedly expressedfaith in both the capacities of the people of her hometown, and in her commitment to keep her word from the beginningand throughoutthis tempetuous, post-Vasera.

"No one can honestly tell you when this recession will end, or when the mortgage and real estate collapse will reverse," said the mayor. "But I can tell you honestly that the days of backroom deals and private arrangements for the benefit of a few are over in Perth Amboy.

"Since the first month that I took office, my administration has pursued suspected corruption and financial improprieties that pre-dated my election," Diaz added. "Evidence of misuse of public positions for personal gain has been turned over to the appropriate authorities. Over the past year my executive staff has worked countless hours providing documents and information to state and federal law enforcement authorities for investigation and potential criminal prosecutions."

"Pay-to-play contracts are gone from this city," Diaz announced. "Any contract that is not the result of public bidding or competitive quotations must satisfy both the state disclosure requirements and the city's public contracting ordinance. As a result, since I have been mayor, no city contract has been given as a reward for political contributions."

Naturally there was buzz in the room about state Sen. Barbara Buono (D-Metuchen), who insiders say is on Corzine's short-list to run with him for theoffice of lieutenant governor.

Not everyone here believes Buono would bulk up the governor on this important Democratic Party turf.

"Corzine received 67% of the vote in the primary, and if he puts Buono on the ticket, he'll get 68%,"said one insider. "What does Metuchen get you? He needs an African-American, a Latino, or someone from South Jersey."

In a separate conversation, Wisniewski acknowledged that different candidates shore up different regions, but disagreed that Buono can't drive up Corzine's Middlesex numbers.

"If you put Loretta (Weinberg) on the ticket, that balances out (Kathe) Donovan in Bergen," said the chiar of the Assembly Transportation Committee. "Buono gets you Middlesex. But I do think there's the argument, too, for a Rob Andrews, for example, because of what he brings in South Jersey."

A fed-up, would-be challenger to Corzine in the primary who finally backed down from running a blue collar, roughneck statewide campaign, Councilman Ken Balut dismissed the entire Democratic Party superstructure hereas a decrepit touchstone to the Vas years.

"They knew what was happening here and they never said anything,"complained Balut, who admitted that he thought former Glen Ridge Mayor Carl Bergmanson gutted out a respectable9% alternative effortagainst Corzine in the Democratic Primary.

But "unless you have the name ID and money, it's impossible," said the former cop who ran on Diaz's slate last year and won.

Balut's subsequent threat tochallenge Corzine at a time when Diaz was trying to find her footing in office was hardly a crisis compared to nearly everything else, including an aging water and sewer infrastructure the city has not maintained for two decades, a public safety complex years behind schedule and millions of dollars beyond projected costs and near-stagnant tax revenues.

Perth Amboy this year also sufferedthe firstdeath of a city police officer in the line of duty: Patrolman Thomas Raji.

"This has been a year of shared sacrifice," Diaz said at one point in her speech.

"As you know, I voluntarily took a $30,000 cut in pay for my first year in office, and I pledge that my salary will remain the same for the next fiscal year.

"We have operated the City of Perth Amboy with far fewer employees than my predecessor," she added. "We have governed the city through these contentious times with a much smaller administrative staff than in years past. I thank everyone who has cooperated and joined together for the public good. And I am confident that if we continue to work openly and honestly together that the painful financial steps that we have taken in this first year of my administration will point the city toward the road to recovery."

Describing these tough first monthsto the crowd, Law Director Mark Blunda said he remembers the people he encountered early who asked for jobs when they saw their new mayor, some of whom acted as though they were entitled to government workbecause the helped elect Diaz.

Diaz assuredBlunda, "I didn't promise anything to anybody except good government."

Heartened at the time, convinced as the two went forward thatshe was tough and honest – even as he jokingly admittedsometimes he's glad he doesn't speak Spanish to spare himself the cursing in the thick of this fight,Blunda said of his boss, "She will grab your arm and tell you, 'Call me Wilda,' but don't be fooled. This is a woman of great character and great strength who will not be intimidated by anyone." 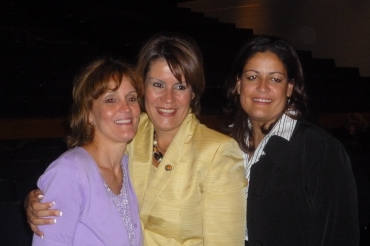