When Joe Menza defeated Councilman Jerome Jewell by fewer than tenvotes to become mayor of Hillside, he did so as aperennial challenger to the local Democratic Party machine, and he remains an outsider even on the day of his swearing-in ceremony tomorrow.

"By law, I have to be appointed by noon," said Menza. "It's 12o'clock every year, but they made it very clear they want the council re-organization meeting and the mayor's swearing-in separate."

So the council re-organizes at 6 p.m., six hours after Menza takes the oath.

Menza's team blames Clerk Janet Vlaisaljevic,an ally of local partyChair Charlotte DeFilippo, forchopping the ceremonies in half andleaving Menza in the unadvertised early slot without the benefit of a re-ordered local legislature and official town infrastructure to lend support.

"It's her (the clerk's) fiduciary responsibilty tomake sure the mayor gets sworn in, and she's disrespecting the position," said Menza campaign advisor John O'Shea, who said Vlaisaljevic told him todeliver an affadavit to her office proving that the judge swore in Menza, who ran as an independent with the support of GOP gubernatorial candidate Chris Christie.

"We picked substitute JudgeGeoffrey Gechtman to perform the honors," added O'Shea, who also extended an invitation to Christie to attend the mayor's swearing-in ceremony. 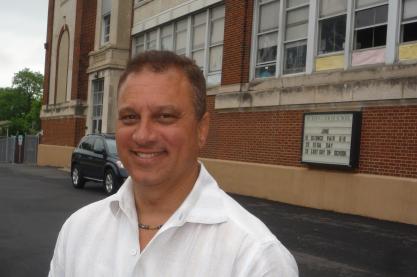