HOBOKEN – A long day of drama has come down to last minute hand-clutching as the late crowd comes home.

"They've got every union in town mobilized against us, we'd appreciate your vote," says Dave Mello, a teacher in the Bronx going to law school nights, who runs on the Zimmer team.

He has the jacket off and the tie loosened as he practically dives into another off-load from the trains making the trudge up Hudson Street.

As they head toward Mello they pass under a storefront bearing the enormous smiling face of Zimmer's archrival Peter Cammarano.

The story that has everyone involved in either campaign gabbing overtime is the earlier day appearance by nearly 200 would-be campaign volunteers, who showed up at Cammarano headquarters claiming a gmail invitation from the at-large councilman's campaign.

"Not us, try the Zimmer HQ up the street" they were told.

They did that, and Zimmer's handlers likewise told the hopefuls they weren't needed.

Both sides – Zimmer and Cammarano – claimed they were already hipdeep in their own armies willing to brave all manner of bad weather, leaving the out-of-towners doubly frustrated and marching back to Cammarano HQ.

The time drain – in between cops arriving on the scene and Cammarano's people posting a sign out infront of their headquarters amplifying their assertion that they had nothing to do with the miscommunication – seemed to boomerang on Cammarano worse than Zimmer.

If the early morning storm backed voters away from the polls, it hasn't shown.

"Turnout is about the same as last time (May 12th when there werefour more mayoral candidates running for office)," says City Clerk Jimmy Farina.

Now the corner of Hudson and Newark streets teams with campaignersfrom both sides, trying to press that last minute palm card into generallyunwilling hands already juggling cellphones and baggage, and flashing that last hopeful smile.

A man in front of a hotdog stand,whichbears another picture of Cammarano dangling from the umbrella, breaks from a crowd of blue shirts (Cammarano) and green shirts (Zimmer) and grins amid the melee as he attempts to sieze the softened resistance of these work-weary passersby.

He handsover a sheet of paper.

Aglance down at the 8 by 11 he addsto thetop of a stack of Cammarano and Zimmer lit reveals hisown pitch separate from these others: "Chinese Massage, Oriental Natural Therapy. …In today's world, people are living a stressful and fast-paced life, which causes painful stress on the shoulder, neck, back, and legs." 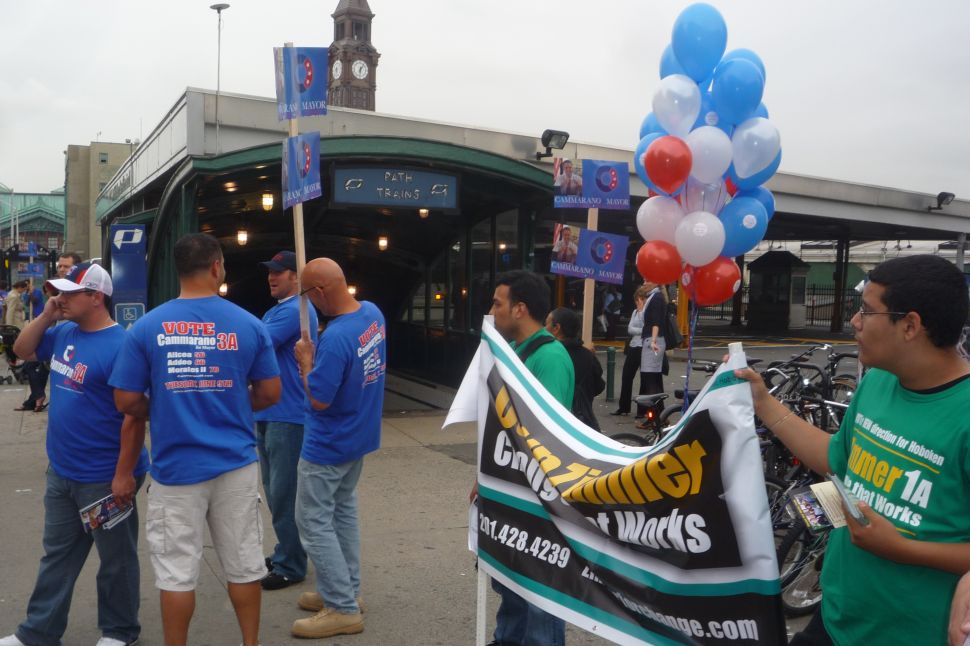