The automated poll of 1,094 registered voters shows Christie at 51% to Corzine’s 41%. Just 36% of respondents said they had a favorable view of Corzine, while 56% had an unfavorable view of him. Christie was seen in a favorable light by 43% and unfavorably by 33%. A significant amount of respondents – 25% — were unsure how they felt about Christie, while only about 8% were not certain on Corzine.

Still, voters minds are not completely set on their choices, with 30% of all respondents saying they could change their preferences.

“There’s not much doubt Jon Corzine’s in a pretty big hole,” said Dean Debnam, President of Public Policy Polling. “If there’s good news for the incumbent it’s that about a third of voters say they could change their minds between now and November. He’ll need a lot of folks to move over to his column if he’s going to get reelected.”

The poll’s margin of error is plus or minus 3%.

This is the eight-year-old firm’s first poll on the New Jersey gubernatorial race, so there are no previous results to directly compare it to. It does square with most of the recently conducted independent polls, however.

Politico reported last week that Public Policy Polling has been embroiled in some controversy at home in North Carolina, where U.S. Sen. Richard Burr (R-N.C.) accused it of Democratic bias after its results continually showed bleak reelection prospects for him. But the story points out that the Wall Street Journal reported that it was among the most accurate pollsters toward the end of the 2008 presidential election.

Political analyst Stuart Rothenberg wrote at length about Public Policy Polling in a column for Roll Call yesterday, saying that it was too early to judge the firm's credibility, but noting that its polling on the Virginia Democratic gubernatorial primary had been good. He also said one can't judge a polling firm's credibility by the political party it conducts polls for.

More poll fodder is set to come out tomorrow, when Fairleigh Dickinson University PublicMind will puts out its latest survey on a head-to-head matchup between Corzine and Christie, Corzine’s approval rating, the direction of the state and the public’s reaction to the recently-signed budget. 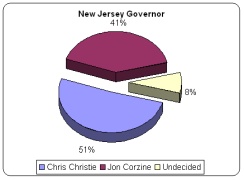