While South Amboy Mayor John O'Learybattles to prove he's done nothing wrong, the Middlesex County Democratic Party has made moves to replace him as a 19thLegislative District Assembly candidate — just in case his efforts prove futile.

The state Attorney General's Officeis reportedly investigating work with area towns by O'Leary's insurance brokerage firm, and work allegedly performed in South Amboy by the Baltimore-based insurance company Federal Hill Risk Management. O'Leary has denied that the firm has any affiliation with the one he operates with his brother.

A replacement candidate for three term incumbent Joseph Vas (D-Perth Amboy), whobacked out of running for re-election amid federal and state corruption indictments, O'Leary received a subpoena last week – the result of an anonymous letter circulating in the district, which charges the 23-year mayor with abusing his office.

Insisting he's innocent, O'Leary has vowed to weather the bad news cycle and to clear his name. But sources close to party leaders say the Democrats don't want a firestorm in a safe Democratic district. Some Democrats want O'Leary to withdraw, an outcome that to some could prove fortuitous,given the early demands and subsequent frustration of the powerful Latino Leadership Alliance (LLA).

"I don't know the particulars about the O'Leary situation, but I have spoken in the past with (Middlesex County) Democratic Party Chairman Joe Spicuzzo indicating to him the importance of replacing Joe Vas with another Latino," said Martin Perez, the alliance's founder and executive director.

That didn't happen whenthe party nominated O'Leary without a challenge.

For the moment, "Mayor O'Leary maintains he hasn't done anything wrong, and right now there is no reason to believe he's going to get out of the race," said Spicuzzo."He's talking it over with familyand friends, but he maintains that he is in the race."

When Vas's re-election candidacywent belly up with the impact of corruption charges earlier this year, his conqueror in last year's mayoral race, Perth Amboy Mayor Wilda Diaz, faced the prospect of working with party leaders to select a successor to Vas from the district's second most populous town.

Somefellow political insiders from Middlesex have counseledO'Leary to retreatfor the sake of the party in a political climate which already doesn't feature the Democrats at full strength, what with Vasembattled in court and Gov. Jon Corzinetrying to pull up his own lackluster numbers in the Democratic county.

Of course, it should be a safe Democratic seat – but Republicans, including their District 19 candidate for the Assembly from Perth Amboy – are revved.

"I'm obviously not corrupt," said Richard Piatkowski, 63, atemporarily retried realtor and longtime citizen activist whosays he worked withinvestigators to helpdrag down the Vas empire in Perth Amboy."Assemblyman Vas once told me there were over 3,000 bills introduced in the Assembly in one year. These are politicians voting for one another and fighting to keep jobs for their friends. These are warlords and little wannabe dictators who dotheir workunder the guise of legality. They're no different than rulers in a banana republic. Maybethey don't linepeople up and shoot 'em with bullets,but theydo take awayour rights with their laws. My vote would be strictly for the citizens."

Piatkowski said he doesn't know if O'Leary's done anything illegal, but he did read into the South Amboy mayor'sinterviewwiththe Home News Tribune last week some comments he doesn't think reflect the Democrat's commitment to the larger public good.

"When Joe Vas decided he wasn't going to run, he said he'd make a decision based on what's best for the Democrat Party," said Piatkowski."Now O'Leary's talking about the reputation of his family. This is not about party, or family, it's about the citizens of the 19th District."

Moreover, the longtime Perth Amboy City Council meeting presence, who said he has been calling out politicians for 20 years, protested an agreement O'Leary's insurance brokerage firmhad with the city that collected 15% on EMT services, or about seven percent more than what it should have been given the average,by Piatkowski's reckoning.

Piatkowksi, who with fellow Republican Peter Kothari of Woodbridge arechallenging O'Leary and incumbent Assemblyman John Wisniewski (D-Sayreville), denies any role in assembling or distributing the letter that continues to damage O'Leary.

"I wouldn't have leaked it to a local paper, I would have had a press conference and Iwould have waited until the fall," said the GOP candidate."I say that without knowing the content of the letter."

Perth Amboy Councilman Ken Balut, an independent Democrat who ran and won with Diaz and who earlier this year threatened to primary Corzine, lauded Piatkowski's efforts through the years and claimed the Republican deserves to be an assemblyman.

"Rich Piatkowski has been fighting City Hall for years and he's been fighting the corruption in Perth Amboy to the point where, dammit, Democrats should sit this one out," Balut said. "O'Leary should step down and the Democratic Party should step back.Rather than fielding another candidate, the fact is, there is a man running right now who nobody listened to.That's Rich Piatkowski. The Democrats deserve to lose this seat out of embarrassment." 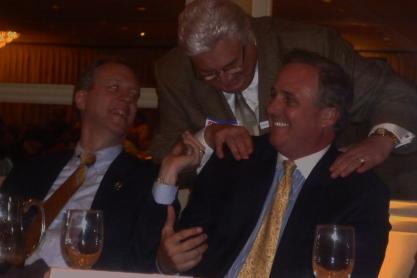