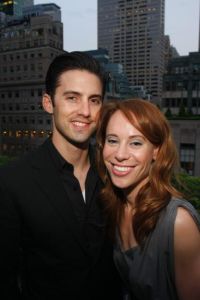 Actor Milo Ventimiglia, standing with Blip.tv’s Dina Kaplan, has a new digital project in the works, as he’s set to star in and co-produce a new scripted Web series called Ultradome. The premise? Two film nerds debate about their favorite onscreen characters in a special effects thunderdome–say, who would win in a fight? Captain Kirk or Spock? Mr. Ventimiglia and his co-producer, Russ Cundiff, are set to appear in the premiere episode, in which Mr. Ventimiglia will pit Star Wars against Mr. Cundiff’s favorite, The Lord of the Rings, later this summer.