TRENTON – The state Senate majority just stamped its imprimatur on Judge Barry Albin's lifetime renomination to the State Supreme Court by a vote of 27 to 11.

Justice Albin of Warren Township, 56, a former trial attorney appointed to the Supreme Court by Gov. Jim McGreevey in 2002,came easily out of committee earlier this week by a vote of 9-4, and tonight hit some but ultimately only tokenturbulence in the chamber at large.

State Sen. Gerald Cardinale (R-Bergen) worried about the judge's presence on the court after his involvementin that decision.

"When he was questioned about…the notorious Torricelli case… his words did not seem to match what he had done," abothered Cardinale recounted of Albin's appearance before the Judiciary Committee. "He suggested to Sen. Beck if we just passed a new statute, we had it in our power that we had it in our power to create a new process. …He could not answer, except to come back to the fact that precedent had guided his action."

Finally, Cardinale said he couldn't restore Albin to the court because he wants tobreak the ironclad grip this Judicary branch has on the state.

In his preface to the vote tonight, Sarlo took credit for moving long-stallednominees to boards and commissions.

In his threemonths as chair of judiciary, "We confirmed 350 people," said the senator. "(A list of gubernatorial nominees) is now down to 18 people, the lowest it's been since Gov, Byrne," Sarlo said.

Sarlo attributed the relatively painless process of Albin's renomination to a grassroots effort in the committee.

"The process worked… Sen.Sarlo in particular was extremely cooperative with our side of the aisle," Cardinale concurred. 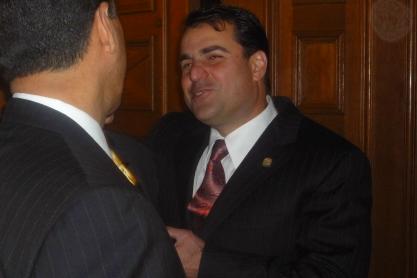