WAYNE – Tonight is the culmination of a three year feud that has divided the Passaic County Republican Party, but Assemblyman Scott Rumana (R-Wayne) – whose chairmanship is on the line tonight – didn’t break a sweat.

Between glad handing with supporters and quickly dining on some salad and pasta at the Grand Chalet on Route 23, Rumana pinned the blame for the party’s lackluster decade on the leadership of former Chairman Peter Murphy, who founded GOP Strong – the group that has spent the last three years,and especially the last six months, going after him with a vengeance.

Tonight, Rumana faces a challenge from Carl Mazzie, who has the support of GOP Strong but does not claim membership in the organization. Voting was scheduled to end at 9:00, but 10 minutes past the hour dozens of committee members remained waiting in line.

“We had everything. At one time we had everything,” said Rumana, who began his political career when the Republican Party still dominated Passaic County. Now it’s been seven years since they've won a county-wide election.

“Back in the 90s, not only were we known for our corruption under Peter Murphy, but on top of that we were losing races,” said Rumana. “Not only did you have corruption, but you had failed leadership. We lost seats, not only on the county level, but the state level and local level. And really, we were spinning out of control.”

Rumana has been chairman for three years, and his critics argue that he’s done nothing to get the party out of its morass, partly due to the fact that he works three jobs and doesn’t have the time necessary to devote to building the party.

Rumana answered that with a list of politicos, both current and former, who have crowded resumes.

“Senator Kevin O’Toole, Bob Franks, Chuck Haytaian. Other side of the aisle, but Joe Cryan,” he said.

Murphy, who Rumana has pointed to as the main force behind tonight’s challenge, did not show up. But waiting to vote on a slow-moving line that snaked through two ballrooms stood Michael Mecca, the GOP Strong co-chairman and newly elected municipal chairman of Clifton.

Mecca is a reminder of just how far the party has fallen. He won a freeholder seat in 2001 — the last a Republican won county-wide.

“I feel good about our chances. We’ll see,” he said.

Mecca dismissed the prospect of reconciliation as long as Rumana remains chairman.

“I believe if Scott gets reelected it will just by a chairman of divisiveness and we just don’t get much accomplished,” he said.

If he wins, Rumana does plan to offer some sort of conciliatory message or deal, although he has not yet divulged it. Mecca, however, scoffed at the idea.

“I think he should have made it before [tonight],” he said. “He had three years to put everybody in a room, and he didn’t do it. Actions are larger than words.”

One issue that has dropped off the table is the question of certification for county committee members, hundreds of which were fielded for last week’s primary by the PCRRO and GOP Strong. Mazzie filed a court complaint to attempt to delay the election, but a judge ruled against it this afternoon.

By the end of the workday, the county committee results from all 16 Passaic County towns were certified.

Mazzie stood in front of the crowded venue with a few supporters. He felt at a great disadvantage, accusing the party of not providing him adequate notice of a rules change and having rebuffing his attempts to delay the meeting until he had a good grasp of who the voting committee members would be.

“I’m trying to hit the target, but it keeps moving,” he said. “The rules change literally every hour for me.”

Although accepting the support of GOP Strong, Mazzie insisted that he was not a member of the organization and was, in fact, the one figure who could unite the party.

“I don’t have to answer to anybody. I’m not running for Assembly in November. I’m not looking for an appointment, any political job. I’m not looking for anything other than to try to heal the party,” he said.
Like Rumana, he lamented the party’s fall from power. But he argued that Rumana only made matters worse. Still, he didn’t exactly offer a ringing endorsement of GOP Strong.

“If either side is in control, nothing is going to change,” he said. 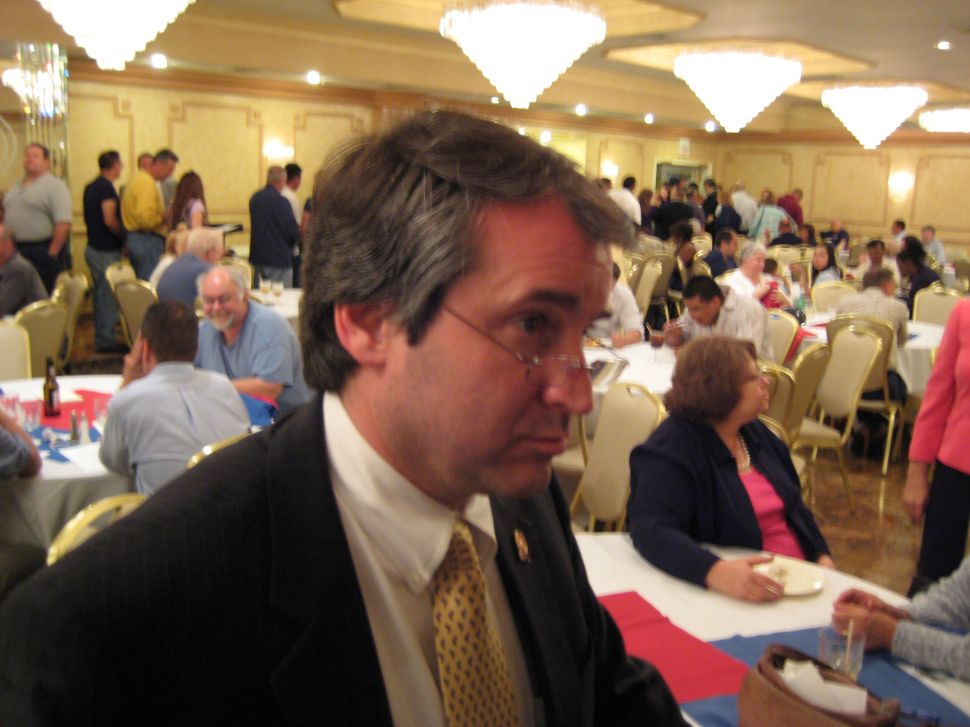