Certainly, someonerunning for re-election this year might be comforted byspecial caseasterisks in those contests where challengers upset sitting mayors or council people.

But consider thename politicians who lost over the course of May and June municipal cycles, or found the terrain too tough to run again, and it looks like treacherous territory for incumbents in a gubernatorial election year.

Two of last week's losers- Morristown Mayor Donald Cresitello (buried by Tim Dougherty, 62.46 to 37.48%)and Edison Mayor Jun Choi (who lost, 50.70 to 47.79% contest to Councilwoman Toni Ricigliano)- arrived at their re-election bids with their own particular challenges, starting with divided party loyalties in both contests.

In or around elected office for over 30 years, Cresitellopossesses institutional knowledge andinsider connections that helped as he kept Morristown's tax rate stable over the course of his most recentfour-year term. But he also asked forpay raises for himself, which the council refused,targeted undocumented workers in his crackdown of apartment house stacking, and considered placing a public works' garage in Ward 2, which empowered his opponent to build on a base of residents who felt disrespected.

Moreover, Dougherty's wife is chair of the local Democratic Party, which made it doubly difficult for Cresitello to position himself as thelitmus testDemocrat.

In Edison, Choi realized that trying to seek the support of local party chair Tom Paterniti was a futile effort, and mounted his own reform campaign.Granted, he ran off-the-line in 2005 with the same message, and has been building his own alternative power structure for four years now, which was strong enough to catapult his slate of council candidates into office in 2007.

At least two factors made Edison 2009 diffferent from 2005, however. One was the intensified effort by the local Police Benevolent Association (PBA) and firefighters' union to oustChoi this year after those organizations clashedbitterly with the reformer mayor. The other was Ricigliano's ability to add voters to the dedicated base infrastructure ofher party. A longtime Democratic Party committeewoman, Ricigliano nonetheless ran off-the-line in her last council bid with the support of former independent mayoral candidate George Stephens, who had a base of alternative voters built under the auspices of the People's Choice slogan.

Two other municipal loses stand out with some significance.

On May 12th, Ocean County Democratsrelished victory in Stafford, where they forged a coalition with Lonegan Republicans and independents and defeated Mayor Carl Block. If Block arrived at the race with a glaring downside narrative it was that he was due for a loss after winning elections in Stafford since 1983.

In neighboring Burlington County on the same day, Democrats who in 2007 had upset the natural balance of Evesham Township and seized control of the council, sustaineda reversalon May 12th as a trio of Republican candidates sweptthe Democrats out of office.

The common denominator in both towns was that Block in Stafford and the Evesham Democrats were incumbents in a year of muncipal tax hikes hitting both towns' residents, a situation not unlike the results of another May 12thRepublican battle in Tinton Falls, where Councilman Mark Skudera beat Mayor Peter Maclearie, 52 to 47%.

In the too-tough-to-run again category where voters in two muncipalitieswill decide mayoral runoffs tomorrow, two-term Hoboken Mayor Dave Robertsfaced his own arguably insurmountable obstacle of a 47% tax increase in one year, and quietly decided to cedeground to the next generation.

In Hillside,two-termer Karen McCoy Oliver likewiseconcluded the troubles of her town were too intense to warrant another run, and didn't bother making her intentions known.

The last of these probably had the toughest challenges to overcome. Plainfield rarely re-elects its mayors. Add to that some hard luck local issues such as the closure of Muhlenberg Hospital and an energized alternative party led by Councilman Adrian Mapp and the potential existed for an overthrow.

But running on a crime beatdown, Robinson Briggs defeated Mapp, 46.62 to 39.16% in an election in which the presence of three other challengers split up 13% of the vote. 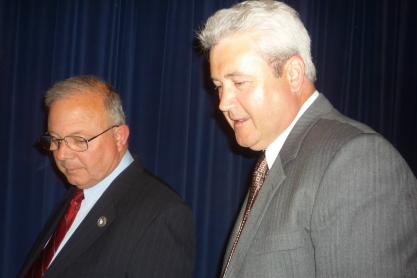