Now that state Sen. Diane Allen (R-Edgewater Park) is no longer in the running for lieutenant governor, she's a top prospect to run against freshman U.S. Rep. John Adler (D-Cherry Hill) next year – at least among Burlington County Republicans.

Allen, a moderate Republican who consistently wins reelection easily in a district with a two-to-one Democratic registration advantage, has fought bitterly over the years with former chairman Glenn Paulsen and more recently Layton, his close ally. The party divide even sunk her fledgling bid for the House in late 2007, with the Paulsen/Layton faction instead recruiting Lockheed Martin executive Chris Myers, who became the nominee.

"Now is not the time in my life that I feel prepared to again fight a Democrat opponent as well as a rogue faction of the Burlington County Republican Party simultaneously," Allen said when she announced in late 2007 that she would not seek the open House seat>

But Layton says he's intent on letting bygones be bygones.

"In politics, sometimes you have your differences, but you put them aside and try to do the best thing for the party," he said.

Myers, who lost narrowly to Adler in 2008, may be in line for a state Senate seat if state Sen. Phil Haines (R-Springfield) is appointed to a Superior Court judgeship. He would likely have a lot of support if he decided to run for Congress again, but he is not expected to.

Allen remains non-committal about running, but she leaves the possibility open.

"It is kind of early, and truthfully it's just nothing I've given any thought to," she said.

Allen said that her decision will depend on whether Adler does a good job addressing the district's issues.

"I've had conversations with John Adler about things I think need to be done, and we'll see if he gets them done," said Allen. "He hasn't yet."

Among those concerns is homelessness in Burlington County and federal money to install new gates and "quiet zones" along the River Line light rail system.

It is early in the process, but Adler's fundraising prowess has sped up the timetable for Republican candidate recruitment. As the first Democrat to represent this traditionally Republican district since the 1880s, he already has a war chest that is fast approaching the million dollar mark, with $869,275 on hand.

The Ocean County portion of the 3rd District is roughly equal to the Burlington County portion, while Adler's home town of Cherry Hill is its only municipality from Camden County. Last year, Republicans from Ocean County – which has never had its own congressman –ran Freeholder Jack Kelly in what became an intensely personal and nasty primary against Myers.

Layton and Ocean County GOP Chairman George Gilmore hope to avoid a similar race this year. But Gilmore's support forAllen is not as strong as Layton's.

Gilmore said that state Sen. Chris Connors (R-Lacy Twp.), who is acceptable to both Burlington and Ocean Republicans, has said he's not interested.

"Give him a call. Maybe you can change his mind," said Gilmore. 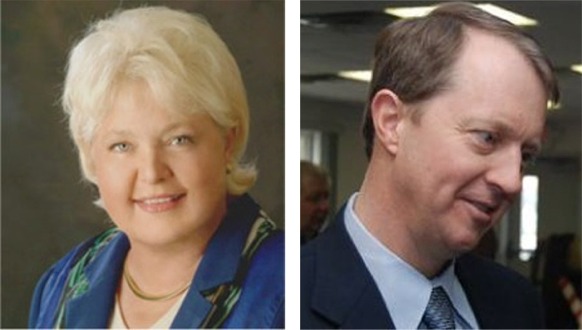