It was the second stop of the day for the two Republicans, after an appearance at a diner in Cherry Hill. This time, the two held court at the Mercer Regional Chamber of Commerce, where local business leaders griped about taxes, fees and regulation, giving Christie an opportunity to explain the one task he's set aside for his lieutenant governor: streamlining the state's business regulations.

The constitutional amendment creating the office of lieutenant governor created it as a backup position, leaving it up to governors to define exactly what the job itself will entail. Christie said that, as he gets to know Guadagno, he'll add to the list ofresponsibilities, which so far includes heading up a "red tape task force" includes leading the "New Jersey Partnership for Action."

"Whenever you asked me about it before, it was hypothetical. Now I have a person who's actually filling the role. And so the first two things are the things that will be her primary, initial assignments. But as we campaign together and define issues, there will be other things that I will assign to Kim," he said.

Christie did most of the talking at today's event, if only because most of the business leaders' questions were aimed at him. Guadagno, however, who is a year and a half into her first term as Monmouth County sheriff, weighed in on a number of issues. She used her former job as a law professor at Rutgers as a jumping off point for talking about higher education funding, and her time as sheriff – where eight different unions represented employees in her office – to demonstrate that she understands the complexity of dealing with them.

"You've got to have guts to stand up to the unions. And I don't mean union busting, as has been suggested in the last couple days," said Guadagno, who blamed the Democratically-controlled freeholder board in Monmouth County for their management of negotiations with her sheriff's officers. Ultimately, because four of the eight unions refused to accept a wage freeze, 54 employees had to be laid off."

"The other four – and I think it was more the way it was negotiated than anything else- did not take the freeze," she said. So on May 1, I took the guns and the badges of 54 law enforcement officers. And it was probably the worst day — I hope it was the worst day of my career as Sheriff."

When asked if there were any lieutenant governors from other states she might use as models for the job, Guadagno said that she had no "preconceived notions of how we're going to approach this office."

"I know this: that the first problem we're going to have is the economy," she said.

When asked if there were any current or former lieutenant governors who she particularly admires, Guadagno said "you got me."

Christie's selection of Guadagno has not been received as controversial by Republicans or Democrats, but it has displeased leaders of two advocacy groups who might have otherwise backed Christie: the Latino Leadership Alliance (LLANJ) and New Jersey Right to Life.

Martin Perez, who presides over the LLANJ, today sent Christie a letter expressing disappointment at his selection of Guadagno, who Perez said "exploited the undocumented for her political gain" in her 2007 sheriff campaign by seeking federal immigration powers for her officers – a move for which Christie had criticized Morristown Mayor Donald Cresitello.

Guadagno, who successfully deputized her officers in the program, said that she only sought the powers for her corrections officers so they could run background checks on Monmouth County jail inmates.

"I bet anybody in this room understood that when you went into a jail they ran your federal crime record, state crime record, municipal crime record – I bet you even expected that we ran your immigration record. Well guess what? We didn't. So without access to the federal program, without access to the federal computers, I had no way to find out in my facility if they've committed a crime, before they're released on bail, if they're also illegal aliens."

Christie, who is against abortion, said that New Jersey Right to Life's rebuff of Guadagno – who yesterday declared that she is pro-choice — was "unfortunate" but "won't change my position on the issue."

After spending about an hour at the Hamilton event, Christie and Guadagno departed for Toms River, where they had a meet and greet scheduled at a senior center. They were also scheduled to attend the Hillsborough Rotary Fair later this evening, weather permitting.

State Sen. Bill Baroni (R-Hamilton) said that he was glad Hamilton- a blue collar town of 90,000 that is expected to be a major battleground this year – was the fourth stop of Guadagno's fledgling candidacy. The message that resonates here, he said, is the same one that resonates in swing towns across the state, including the crucial ones in southern Bergen County.

"People in Hamilton are going to love Kim Guadagno," he said. 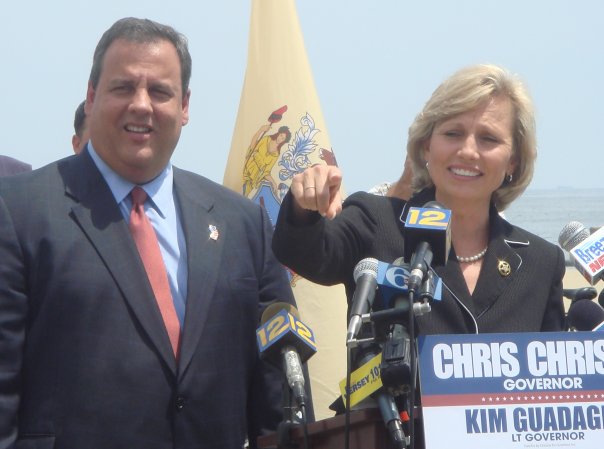