HOLMDEL – They're playing "Born in the U.S.A." now and with GOP gubernatorial candidate Chris Christie regularly festooning his remarks with Boss imagery, it sounds like a cranked up Democratic Party reclamation of the Jersey Shore Telecaster poet.

Marlboro Councilman Jeffrey Cantor, an Iraq War veteran who ran as a Republican for Monmouth County Freeholder in 2007 then changed parties in the local era of Democratic Mayor Jon Hornik, says tonight's his last council meeting for awhile.

"I'm redeploying (this time, to Afghanistan)," says Cantor, who heads into the PNC Bank Center with Hornik and what some other insiders jokingly refer to as the Monmouth County contingent: Hornik, Cantor and the Democratic freeholders: Amy Mallett, Barbara McMorrow and John D'Amico.

Corzine sources said it's only natural that an event originally scheduled for Rutgers University in New Brunswick, should contain a heavy Middlesex County emphasis.

Passaic Councilman Kenneth Lucianin likewise was part of a mass effort to bring in bodies from the north country. 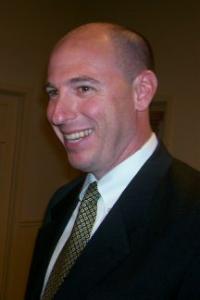