According to the Manzo complaint, "On or about April 23, 2009, at approximately 4:26 a.m., FBI agents intercepted an incoming call to the consultant's cellphone from JC Official #1.During that call,JC Official #1said, 'Hey, you now after we left the Bayonne meeting, me, me, Ronald Manzo and the CW was in the uh, uh, parking lot… guess who we run into?'"

The complaint puts the words "state assemblyman" in brackets.

"I didn't want nothing to do with the guy," JC Official #1 says, according to the feds."I didn't even want him to see me."

As he raked gravel in the parking lot behind his legislative office, Chiappone said he recallswhat he described asa Hassidic man, later identified as Dwek, in the adjoining parking lot.

"It bodes well for me because their reaction was 'here's an honest guy here, they didn't want anything to do with me," Chiappone said.

In an unrelated matter, the State Attorney General’s Office is investigating Chiappone for allegedly forging signatures of Assembly aides on paychecks and cashing them.

At the request of Gov. Jon Corzine, Doria resigned from the DCA last week following an FBI raid of his Bayonne home.The feds have notfiled any charges against Doria. 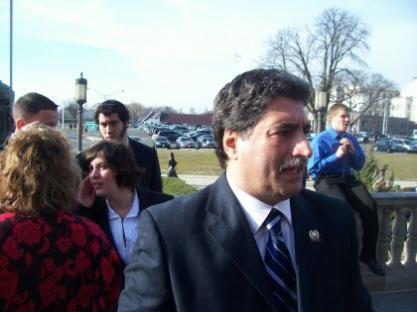