ASBURY PARK – Monmouth County Sheriff Kim Guadagno walked onto the boardwalk here with GOP gubernatorial candidate Chris Christie and stood at his side as he formally affirmed her as his choice for lieutenant governor.

"We are here to make history," announced Christie. "After a great deal of consideration, yesterday I called Kim Guadagno and I am thankful to say that she said yes."

Christie heralded the Iowa-born Guadagno's record as a crimebusterduring hertime asAssistant U.S. Attorney under Michael Chertoff in the 1990s, her past service on the Monmouth Beach local governing body, andwhat he cited as her aggressiveone-and-half-year tenure as sheriff, during which time she has backed down unions and advocated for beefed-up federal powers for local law enforcement to combat illegal immigration.

Known as a hard-nut and fierce campaigner who vanquished former Belmar Police Chief Jack Hill for sheriff only after the race went ugly, Guadagno, 50, with three young sons standing in the crowd,immediately struck a fighting pose at the podium with the surf crashing on the other side of the boardwalk.

The two biggest trophies on Guadagno's prosecutorial wall are former Essex County Executive Thomas D'Alessio and former Somerset County Prosector Nick Bissell, who, in Guadagno's words, was "picking somebody's pocket and putting it in his own pocket."

Sheused that duo to sellher record of being able to go after champions ensconsed in both of the major parties, a storyline Republicans will apparently use to deflect some Democrats' complaint that Christie, while bagging some members of the GOP, mostlytook down the oppositon while he served as U.S. Attorney.

"I know what it's like to prosecute Democrats (D'Alessio) and Republicans (Bissell)," Guadagno said. "Political corruption doesn't know parties."

In a sign that she'll have no qualms about going on the offensive in this campaign,Guadagno setup herlatest target: Gov. Jon Corzine and, in particular, his Wall Street ties.

"With Corzine I thought we had a chance," she said. "But his tenure has proved that "we can't afford to have Wall Street people running our state."

She blamed the Democratic incumbent for failing to shrink government and significantly cut property taxes.

Angelini was a rumored Christie pick at one point during the selection process, but while hers and other names – most notably state Sen. Diane Allen (R-Burlington), Assembly Minority WhipJon Bramick (R-Westfield), and Bergen County Clerk Kathe Donovan – abounded, sources repeatedly said Guadagno, who Christie's known for years, was allbut nailed down as his choice as far back as a month ago.

"I was flattered to be considered," said Angelini, whobelieves Guadagno's a great pick – a woman of "honestyand integrity," in the assemblywoman's words, who has experience running a $65 million,650-member county department.

"I've never met her," said Bramnick by telephone,"but i've heard really good things about her.It makes sense for her to run with Chris as a team of outsiders coming into Trenton from the outside.The fact is, I come with a voting record that they can pick apart."

The GOP LG candidatedeclared herself pro-choice on abortion and against gay marriage.

"It's another example of Chris Christie's effective decision-making," added O'Scanlon, looking at the LG selection process. "Corzine's camp, by contrast, appears to be governed by hysteria and mayhem. Here you have the Christie camp, organized with a great candidate."

Christie made a grinning reference to this at one point during the press conference when he said, "I don't think we look like indecisive people."

"The campaign was more concerned with finding someone perfect for the job rather than worried about politics," said the assemblyman. "If you were worried about the politics, you'd pick someone who has done nothing controversial."

But in a telephone interview, Morristown Mayor Donald Cresitello, who jousted publicly with Christie on the issue of federally empowering local law enforcement to crack down on undocumented workers, called Christie's choice of Guadagno a blatant political play.

"What a contradiction," said the mayor, who vainly called on Christie when he served as U.S. Attorney to help invest his cops with federal crime-fighting powers.

"Christieopposed my application and refused to cooperate with me on that issue," recalled Cresitello, whose application, along with Gudagno's,received a "go" earlier this month from Secretary of Homlenad Security Janet Napolitano."He told Martin Perez he would never prosecute illegal aliens we arrested. You have to question his integrity. How do you do an about-face like this? On the other hand, it's clearas a Republicancandidate is not going to get the Latino vote, so Iguess he's going back to his base."

Guadagno at the outdoor press conference clarified her position on 287 (g).

"My application was for corrections officers to run background checks on illegals who have committed a crime," said the Republican LG candidate.

"My position remains the same," said the gubernatorial candidate, who repeated his view that he believes Cresitello was "grandstanding" and "demagoging" the issue.

"I have misgivings about 287 (g) and I don't want it applied in a discriminatory way," Christie said.

Corzine and independent candidate Chrris Daggett have yet to make their picks for lieutenant governor and, according to the Secretary of State's Office, have to do so before next Monday.

They left the Boardwalk to campaign north of here, firstin Woodbridge and later in Garfield. 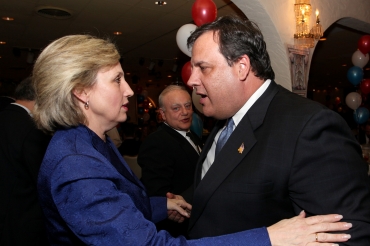