CARTERET – The barges and freighters come through here on their way to Raritan Bay and passing on the Friday before the Fourth of July, some of them give a blast to the crowd gathered at the Carteret Municipal Marina whereStaten Island almostseems a strong sidearm throw away but wherethe band plays the obligatory Springsteen cover -lest anyone doubt this is the Jersey side of the river.

In this case it's "Pink Cadillac" as Gov. Jon Corzine heads through the corridor of tents mobbed with revelerseager for nighttime.

An old factory town literally split in half by the Turnpike, Carteret occupies a point on the Arthur Kill that looks like it could crack off with the weight of reinforced concrete and rustbelt reject silos, warehouses stacked almost to the 's edge and now clusters of condos.The feeling in the working class crowd Friday is more than upbeat on the eve of Independence Day, with plates of ethnic food reflective of more mixed culture than any one definable or dominant strain.

Politically it's not as commingled.

While 12of Middlesex County's 25 towns have more registered voters than Carteret, the10,797 registereds here are 4-1 Democrat over Republican with half unaffiliated.

But this is also part of the 19th Legislative District, where Assemblyman Joe Vas (D-Perth Amboy) stands accused oftoo many counts ofcorruption to add up on two hands; where his replacement, Democratic South Amboy Mayor Jack O'Leary is from the southern bank of the Raritan – nowhere near the Rahway River, which borders the northern edge of Carteret, and in his own right fighting an anonymously penned packet of corruption charges that apparently turned heads in the state Attorney General's Office; and where onetime favorite son Jim McGreevey, a product of the Democratic Party machine,turned out to be a Carteret disappointment.

In April, voters rejected the $57.39 million school budget, which Mayor Dan Reiman and the council subsequently sawed by $1.65 million – no newsflash, asmost of the annual school budgets fail.

As he moves through what on paper should be secure base country, Corzine gets an earful from John Hornyak and his son of the same name,both Perth Amboyfishermen whosay the commercial crabbers stealin at night on the river, lay down their nets and let them collect crabsfor a week at a time.

"Then they come back and pull 'em out and sellthem for $100 per bushel," says the elderHornyak.

After a couple of encounters with the governor as he traverses the crowd, apparently charged up as he poses for numerous pictures andengages in as many tender and several prolonged hugs,the Hornyaks say hetold them that dioxins in the river make it impossible to allow legal fishing here. But they believe the laws are simply preventing smalltime fishermen like themselves from plying their trade so the big bullies can control the river.

As long as the commercial vessels are going unpunished, in their eyes, they also want to be able to crab in the Kill with impunity.

"I've been fishing in thereand eating out of there all my life," says Hornyak. "Am I glowing?"

The father and son intend to vote for GOP alternative Chris Christie, whom they metat last year's swearing-in ceremony for Mayor Wilda Diaz, who told them that the authorities must post "no fishing and no crabbing" signs in order to justly enforce the law.

"But there are no signs," the Hornyaks complain.

Walking with the governor through the crowd is Middlesex County Freeholder Ron Rios, who served as council president of the Carteret Borough Council when the governing body created the park here.

"We're going to get him re-elected," says Rios. "He's done a great job, he'sonly been in there for three years, remember. This economy isn't Corzine's fault. We're going to work for him, and he will have a good showing in Carteret."

Leron and Hilary Eatontrade pleasantries and thumbs-up vibes with the governor.

"Is he a Democrat?" Hilary Eaton wants to know.

"We recently moved here from Chicago,"explains her husband. "We love New Jersey. It's better than Illinois." He makes a face to suggest that anyone's better than former Illinois Gov. Rod Blagojevich.

Accompanied by Mayor Reiman, Corzineheads over to the gazebo, grabs a microphone and gets a rousing hand clap when he urges a round of applause for the Coast Guard.

"You've got a great mayor," heshouts. "Let's pull together and make sure we have a vision for a bright future."

The band launches into "Brown Eyed Girl," when moments later over that backwater that cuts to the gazebo away from the river, where the crowd waits patiently on the cut grass as the sky goes black, the fireworks go off suddenly and light upthe and the warehouses on the southern end of Carteret. 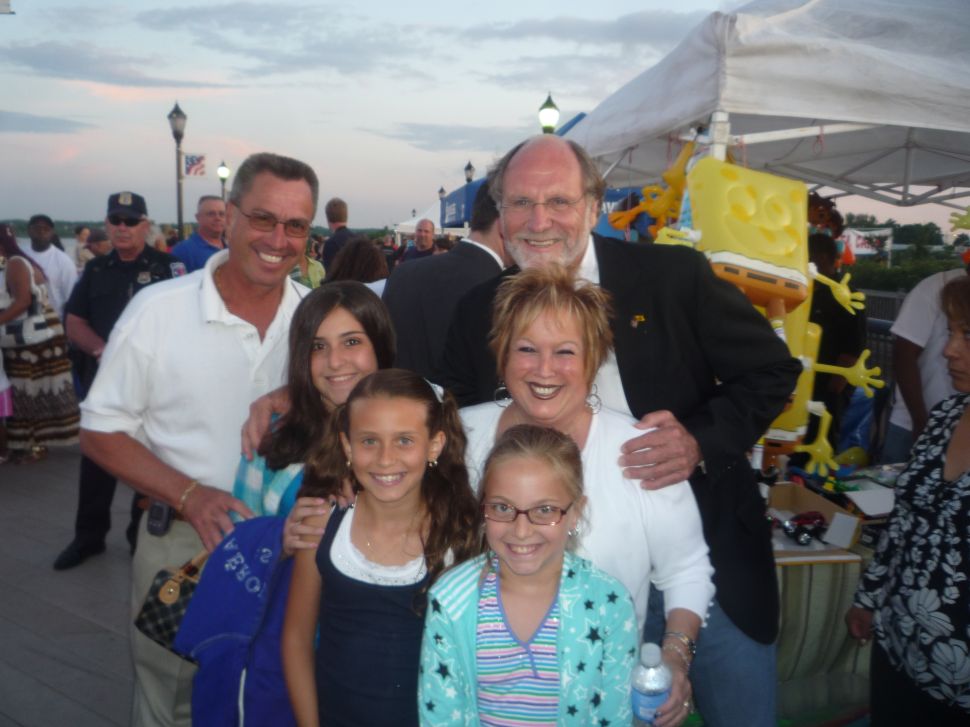