ENGLEWOOD – In front of an audience packed with both her long time loyalists and former foes within the Democratic Party, state Sen. Loretta Weinberg (D-Teaneck) joined Gov. Jon Corzine on stage today as a take-no-prisoners, unapologetically progressive and ethical grandmother who, as Corzine’s new pick for lieutenant governor, hopes to boost Corzine’s now underdog bid for reelection.

“In case you haven’t heard this before, I am a feisty Jewish grandmother from Bergen County. I will never be accused of being part of any – of any—insider political club,” said Weinberg at this afternoon’s rollout of her candidacy at the Bergen Performing Arts Center.

After spending months on Corzine’s shortlist for the number two spot, Weinberg, who has served in the legislature since 1992, was finally tapped yesterday. The pick was heavily influenced by the dozens of corruption busts that rocked the state’s political scene on Thursday. Democrats hope that Weinberg, who has authored several ethics bills and took on an allegedly corrupt party boss in her native Bergen County, will keep Republican gubernatorial candidate Chris Christie – who started his candidacy on his record as an anti-corruption crusading U.S. Attorney – from complete domination on the ethics front.

Even before Thursday’s events, polls showed Christie with an eight to 15 point lead.

There are several other rationales for the selection. They include a geographical component, with Bergen County (population 884,000) being the biggest in the state and expected to be hotly contested in November; and the age component, with Weinberg, 74, appealing to seniors (Senate President Dick Codey (D-Roseland) called her “The Real Grandmother of New Jersey” in his remarks today).

Although Weinberg mentioned in her speech that she fought against tobacco companies, insurance corporations and the liquor lobby, she burnished her ethics credentials most often, and made some unmistakable references to her political foe, former Bergen County Democratic Chairman Joe Ferriero, whose corruption trial will coincide with the run up to the general election.

“The old boys club didn’t let me in voluntarily, and god knows they’ve tried many a time to keep me out, but I am proud to say, while many of them have come and gone, I am still standing,” she said. “I have never accepted that public service was limited to the insiders, and neither has Jon Corzine.”

Weinberg’s remarks made clear that the Corzine campaign has no intention of abandoning a line of attack on Christie as someone who talks the talk on ethics, but who gave friends and cronies no-bid federal monitoring contracts.

“He was very clear in deciding which of George W. Bush’s former aides, which of his brother’s former prosecutors, and which of his close friends would receive millions of dollars in no bid contracts,” she said.

In introducing Weinberg, Corzine called her a “loyal and independent friend” who he trusts “absolutely, completely.”

“As a mother, grandmother and public servant, Loretta has an impeccable, unimpeachable conscience — a clear view of right and wrong,” said Corzine.

Republicans, of course, did not gush about the Weinberg selection.

“As someone who has endorsed and been a vote for Governor Corzine’s failed policies, Senator Weinberg has squeezed struggling families with property tax increases and done nothing to bring jobs back to the state. This election is and will continue to be about Governor Corzine’s record,” said Republican State Chairman Jay Webber (R-Morris Plains), who’s also an assemblyman. “The choice for New Jerseyans this November could not be clearer – a failed governor and his liberal legislative ally or a team of outsiders who will change Trenton for the better, create jobs, and get our state back on track.”

One Republican, Assembly candidate Wojciech Siemaszkiewicz ,stuck out in the crowd of Democratic insiders. He said that progressives are “dancing in the streets” at the pick, but that they all would have voted for Corzine anyway. After the event, Siemaszkiewicz stood outside with a sign protesting the closure of Pascack Valley Hospital – something Weinberg supports.

There was no dissension in the Democratic ranks, however.

State Sen. Paul Sarlo (D-Wood-ridge) came up from his weekend at the shore to attend the event. He walked in and cheerily greeted Senate Majority Leader Stephen Sweeney (D-West Deptford), who outmaneuvered him for the post of Majority Leader a year and a half ago.

“How ironic is this? She cast a vote against me for majority leader against him, right, and we’re together, and I gave up the beach,” said Sarlo as he was arm-in-arm with Sweeney. “And I was her biggest supporter. I led the effort here in Bergen to get it done.”

State Sen. Bob Gordon (D-Fair Lawn) offered a succinct description of Weinberg and why he thinks she will be an effective running mate.

“She’s a feisty grandmother who knows how to land a punch,” he said. 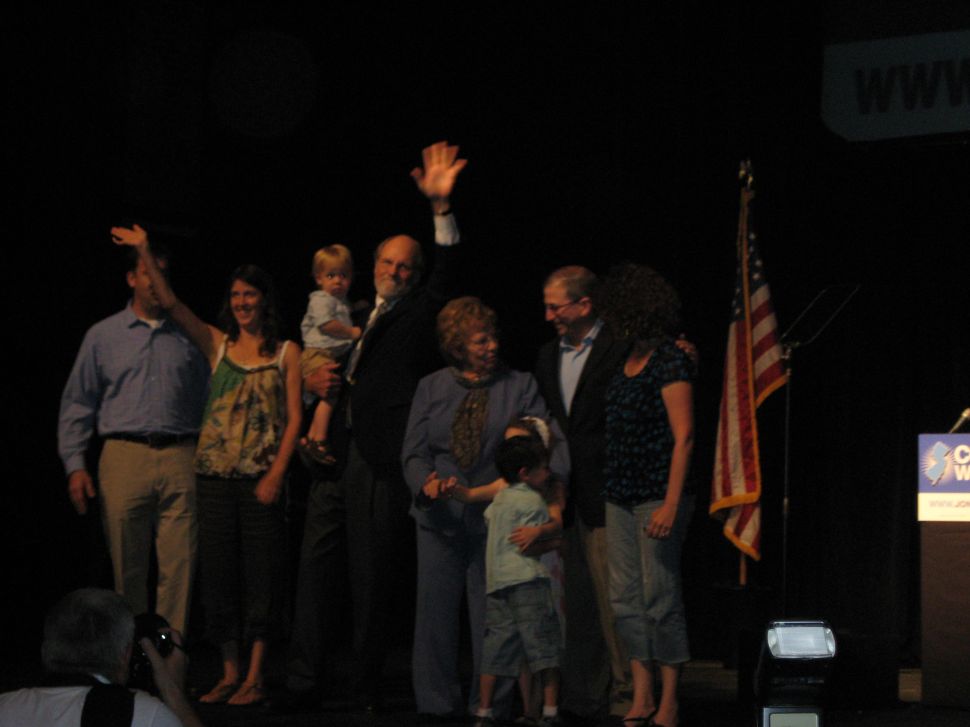