Staring at a 12-point deficit in the governor's race and saddled with the responsbilityof driving bigEssex numbers in November for Gov. Jon Corzine, name Democrats here gaped at Corzine's rumored impending selectionof a private sector African-American running mate. At least intially they questionPinkett's presence besidean incumbent schooled on Wall Street whose strong point was never his old-hand knowledge of politics and government.

"I don't know him, so I wouldn't have any comment about him," Essex County Democratic Party Chairman Phil Thigpen said of Pinkett. "The skills required to get elected and to get people to vote are not necessarily the same as the skills you need to make money. He hasn't been active in politics, to my knowledge."

State Sen. Ronald Rice (D-Newark) doesn't know Pinkett, but doesn't have a good feeling about him.

"People have relationships in business, and when they do, frankly, I get a little nervous when it comes to grassroots issues," said Rice of the 38-year old technology consultant from Franklin Township who's never held elected office. "Some of these business people should remain business people. Their trouble when they get into politics is they personalize what's good for them and they reach that point where they cross that line and can't see the people anymore."

"I would suspect he runs in some of the same business circles as Cory, not people in Newark," said Rice, who lost to Booker in the 2006 mayor's election."Upper middle class. His is probably more the Cory-type circle of people. Being a business guy, that's the circle he runs in."

Assemblyman Tom Giblin (D-Montclair), a labor leader and former state chair of the Democratic Party, took the developing news about Pinkett with some skepticism.

Some insiders here thought Pinkett was a ruse leaked to create panic in the Booker camp and, finally,sheepish acceptanceon themayor's partto run with Corzine rather than watch the generation of a statewide African-American presence four years prior tohis own presumptive run for governor who could eclipse Booker's starpower.

Popular statewide, Booker was the governor's first choice as a running mate, according to sources.

In light of today's badmarks from Quinnipiac University, Senate Majority Leader Richard Codey (D-Roseland), a former governor who himselfenjoys statewide popularity, said no one in the White House has talked to him about replacing Corzine as the gubernatorial candidate.

As for Pinkett, "I understand the need to turn out the minority vote and energize the campaign," said Codey. "He's an unknown, so there's a little bit of roulette going on, but in the end it's the governor's decision to make. It's out of the box, but if that's his selection, then I'm on board."

Today's poll numbers, which landed after Corzine looked as though he was starting to move the other way on his opponent, Republican Chris Christie, deepened the concern for Rice and Giblin.

"The governor's in trouble," said Rice. "We're going to have to do everything we can to pull him out. I think to this point his campaign has had a faulty strategy, just going after Christie. What they're doing is trying to put Christie on the defensive with one or two isssues that people don't care about rather than running on positive things the governor's done. People get tired of ugly campaigns. You have to be on the doors early with a message, and I don't see that. What they want to do is put Corzine and Cory and Pinkett on a stage with Obama on Thursday and spin that into a television ad. The trouble is nobody will watch that ad because they're too busy pounding the pavement out there trying to find jobs."

"Clearly, the governor's not gaining any traction if he's down by double-digits," said the assemblyman. "He's got to go back to the basics. The issues? Jobs, jobs, jobs. What do you intend to do to stir the economy? I think he's done a lot of things: the ARC Tunnel, schools construction, highway widening. But he has to talk about it in a meaningful way."

Rice, too, said the governor has a good record on many issues of concern to his constituents, including schools construction, where Rice said Corzine has more than delivered.

But Pinkett gnawed on the nerves of other electeds, who didn't want to go on the record with what they interpret as an "insult to black people to take someone with no name in politics and try to give him a name in the middle of a campaign."

As for whether Corzine can find his legs after a12-point mid-summer deficit, "I can answer that question after Obama (who's scheduled to appearwith Corzine at the PNC Bank Center on Thrusday)," Thigpen said. 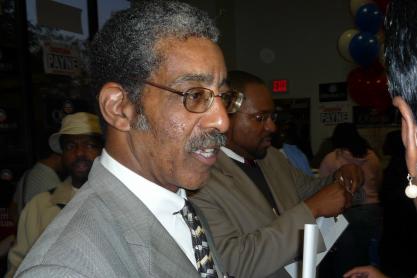