REMARKS BY THE PRESIDENT
AT LUNCHEON FUNDRAISER WITH GOVERNOR JON CORZINE

THE PRESIDENT: Thank you. It is good to see you. Hello, New Jersey! (Applause.) All right, everybody have a seat. Everybody have a seat. I want to begin by just making a few acknowledgements. First of all, I'm going to have a lot to say about this guy, but I just want everybody to know that one of my earliest supporters, somebody who had faith and confidence in me before I was a United States senator was the man standing next to me right here — Jon Corzine. (Applause.) And so it is a special honor to be with him.

I want to just say a little something at the top. As many of you may have heard, five officers were shot in the line of duty in Jersey City. Jeremiah — I just saw him; we just discussed it. He may already be on his way back. Obviously we are watching this closely. Our thoughts and prayers go out to the families of all the officers who have been hurt. And we are confident they are going to end up coming back strong as ever. But it's a reminder for all of us of the incredible sacrifice that our law enforcement officials engage in, and their families are part of, each and every day. So I hope everybody keeps them in their thoughts and prayers in the days to come. (Applause.)

It is great to be back in New Jersey. I'm proud to stand with a man who wakes up every single day thinking about your future and the future of this state — and that's your governor, Jon Corzine. (Applause.)

Like many of us in public life today, Jon is a leader who's been called to govern at some extraordinary times. He's been tested by the worst recession in half a century — a recession that was caused by years of recklessness and irresponsibility, and obviously had a disproportionate impact here in New Jersey, given the closeness of the financial sector to the state.

Part of the crisis was caused by the same small thinking that's plagued our politics for decades — the kind of thinking that says we can afford to tinker around with big problems, put off tough decisions, defer the big challenges, tell people only what they want to hear.

That's not the kind of leader Jon Corzine is. He didn't run for this office on the promise that change would be easy, and he certainly has not avoided what is hard. This isn't somebody who's here because of some special interest or political machine — he's here because he cares about what happens to the people of New Jersey.

This is a man who has provided more property tax relief than any other governor in New Jersey's history. (Applause.) This is the first governor in 60 years who has reduced the size of government. At the same time, this is also a leader who has stood up against those who wanted to cut what matters, like education. Jon Corzine has not only protected funding for New Jersey's schools, he's reformed them with higher standards, and now students in this state rank at the top of the country in reading and math. That's a testimony to Jon Corzine's leadership. (Applause.)

Since Jon Corzine became governor, the Children's Health Insurance Program has been expanded to reach 80,000 more children — 80,000 who got health insurance who did not have it before. New Jersey has become a leader in clean energy. And Jon Corzine wasn't just the first governor to pass an economic recovery plan for his state; he was an ally in helping the federal government, my administration, develop the national recovery plan.

And because of these recovery plans, jobs have been saved and created throughout the state of New Jersey — jobs of cops and teachers; jobs in small businesses and clean energy companies. Unemployment insurance and health insurance has been extended to those who have felt the brunt of this recession, who lost their jobs. Tax relief has been delivered to families and small businesses. Ninety-five percent of working families have already received tax relief as a consequence of our recovery plan. And I can promise you that more help is on the way in the weeks and months to come.

Now, I realize this is little comfort to those who have lost a job in this recession. Some of you know people who've lost jobs, or maybe you're — worried about losing their home or can't afford their health insurance anymore. I realize that some of the progress that's been made doesn't help some folks who need to pay their bills and have fallen deeply behind. And I'll be honest with you — even though jobs have always been one of the last things that come back in a recession, some of the jobs that have been lost may not come back.

The fact is, even before this crisis hit, we had an economy that was creating a good deal of wealth for the folks at the very top, but not a lot of good-paying jobs for the rest of America. It's an economy that wasn't built to compete in the 21st century. It was one where we spend more on health care than any other nation but aren't any healthier; where we've been slow to invest in clean energy technologies that have created new jobs and new industries in other countries because we've been slow to take up the call of clean energy. We had an economy where we've watched our graduation rates lag behind too much of the world. We used to be at the very top, number one, in college graduation rates. We aren't anymore; we're in the middle of the pack.

Now, there are some in New Jersey, some in Washington, some all across the country, who want us to go down the path we've already traveled for most of the last decade — the path where we just throw up our hands and say, "We can't do anything about health care. It's too tough. We can't do anything about energy — too hard" — where we do nothing but hand out more tax breaks to the wealthiest few that make the rich richer and the deficit even larger, and leave ordinary people in the lurch. That's one path. It's a path where our health care costs keep rising and our oil dependency keeps on growing, where our financial markets remain an unregulated crapshoot, and our workers lose out on the jobs of tomorrow.

We did not come as far as a country as we have because we've spent all our time looking backwards, or because we stood still in the face of great challenges and said "No, we can't." We didn't get here by lowering our sights or diminishing our dreams. We are a forward-looking people — a people who have always faced the future not with fear, but with determination; not with doubt, but with hope. We've always taken great chances, and reached for new horizons, and remade the world around us.

And that's what we must do again. I am absolutely confident that we will weather this economic storm. But once we clear away the wreckage, the real question is: What are we going to build in its place?

Even as we rescue this economy from this crisis, I believe we have to rebuild an even better economy than we had before. We're going to have to lay a new foundation that will allow this country to thrive and compete in the global economy. And that means investing in the clean energy jobs of the future. That means educating and training our workers for those jobs. That means finally controlling the health care costs that are driving this nation into debt. (Applause.)

When it comes to these issues, the naysayers seem to think that we can somehow just keep on doing what we've been doing and expect a different outcome. We can't. And everywhere we go, I meet Americans who know that we can't. They know change isn't easy. They know there will be setbacks and false starts. And I love some of our opponents who stand up and say, "Look, it's been six months and you haven't solved the economy yet." (Laughter.) The American people know better than that.

Here is what they also know: We're at a rare moment where we've been given the opportunity to remake our world; a chance to seize our future. And as difficult as it sometimes is, what is inherent about the American spirit is the fact that we don't cling to the past in this country. We always move forward. And that movement doesn't begin in Washington — it begins with you. It happens because the American people decide it's time to move forward; because you decide it's time for change; because you're willing to face the future without fear. And if you do that now, then we will not only reelect Jon Corzine so he can keep on fighting for families here in New Jersey, but we will do what earlier generations have done and build something better to leave to our children and secure our future in the 21st century.

We are counting on you. And I'm absolutely confident that the American people are going to meet the test.

Thank you, everybody. God bless you. 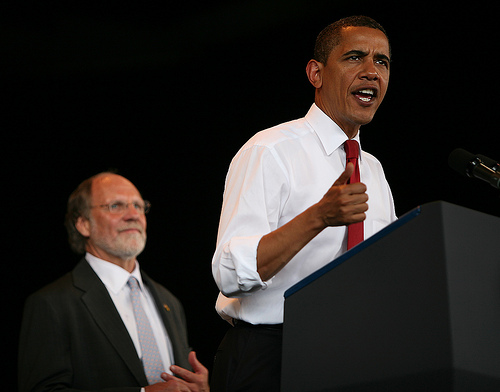