"It is in play because of the rampant Democratic corruption, first with Senator (Joseph) Coniglio and now with Mayor Suarez," said Yudin.

The 38th is considered a relatively safe Democratic district, although Republicans have indicated that they're keeping an eye on it this year. Even after Coniglio (D-Paramus) had to drop his candidacy for re-election to a third term after receiving a target letter from the U.S. Attorney's office in 2007, the Democratic slate, led by Robert Gordon (D-Fair Lawn) as Coniglio's replacement, won easily.

But Yudin thinks the corruption issue may have reached critical mass there. Republican candidate Nick Lonzisero is council president in Suarez's town, and, if Suarez resigns, he will become interim mayor.

In April, Coniglio was convicted of steering state funds to Hackensack University Medical Center, which employed him as a consultant. Former Bergen County Democratic Chairman Joseph Ferriero and ex-BCDO counsel Dennis Oury are set to have corruption trials that parallel the general election. Yudin thinks all that, combined having former U.S. Attorney Christopher Christie – who got the ball rolling on the investigations that ensnared the Democrats – at the top of the ticket, will make corruption a winning issue.

Yudin's focus on corruption – or the "corruption tax" that he ran last year's unsuccessful freeholder campaigns on – has drawn criticism from some Bergen Republicans in the past.

Most voters don't cast their votes based on corruption, the common wisdom goes, and they wouldn't recognize Ferriero if he was standing next to them. Last year, Yudin's rivals pointed to the separate campaign on County Clerk Kathleen Donovan, who was the county's top vote getter. Rather than go negative on corruption, she touted her long record in office and programs she implemented that she said saved voters money.

"There's always spin against me because they're unhappy that I unseated Ortiz, that I'm the chairman, that we did so well. They can't stand the fact that Congressman Garrett won and at the municipal level we took twice as many seats as they took for us. I firmly believe that [part of] the reason Kathe Donovan won was because of the TV campaign I conducted," said Yudin.

Lonzisero, who is running with Fort Lee activist Judith Fisher, said that corruption "is very close to a top issue" in the district.

"Voters can only afford to take so much, and then they turn the other way," he said.

Fair Lawn Councilman Edward Trawinski, a Republican who ran for Assembly in the district in 2003, said that he respects Yudin for his enthusiasm, but doubts that his party has a shot there.

"I don't want to create a public fight with Bob. I certainly think corruption should be and is an issue, but the problem that I've seen with the issue is that for reasons that I do not understand, the people of New Jersey think that most politicians are corrupt in some fashion or another," he said. "I've seen tons of polling throughout the years. I've seen people say that corruption is an issue, but when you look at the exit polling it never seems to play out that way, as a deciding factor."

The corruption issue did work for Trawinski in 2005, when he and his running mate put out a flyer attacking the Democratic incumbents – including Freeholder David Ganz – for pay-to-play.

"If you can relate it to people at a local level instead of just generally, maybe you've got a shot," he said.

Still, Trawinski said that if voters in the district cared about corruption by association, they wouldn't have voted for Coniglio's party in 2007, or statewide for a Democrat after the resignations of Democratic Gov. James E. McGreevey and Democratic Sen. Robert Torricelli.

Even if the corruption issue can help Republican candidates in more competitive parts of the 38th districts, they tend to hit a wall in the towns near the Hudson River waterfront, said Trawinski.

"I supposed theoretically everything is in play, but if I were allocating funds I wouldn't put a heavy focus on 38," he said. "You get to Fort Lee and Cliffside Park and forget it. The numbers are overwhelming." 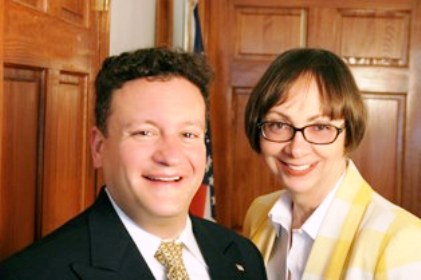