Hoboken Council President Dawn Zimmer would become acting mayor in the event that Mayor Peter Cammarano resigns, and it does not appear, at leastfor the moment, that anyone's big enough to threaten her in the special election.

Gov. Jon Corzine today said Cammarano will be gone tomorrow, but no one's yet heard that publicly from Cammarano.

If he steps down prior to Sept. 4th, the mile-square-city will hold a special on Nov. 3rd, the same day as the gubernatorial contest between Corzine and Republican challenger Chris Christie.

Most people assume Zimmer will run for mayor.

She wasthe top vote-getter in the May election, andin the runoff beat Cammarano on the machines only to lose by 161 votes after theBoard of Electionsfactored in absentee ballots.Her supporters will be more revved up than ever with a sense of righteousness. Cammarano was already an opponent. Now,charged withallegedly taking cash bribes,hedeparts asan outright villain.

After Zimmer, the field gets fuzzier, if there even is a field.

The Council Presidentbuilt her eclectic base out of themortarmix ofgood government grassroots activists, the youth,Kids Firstmothers past the baby buggy stage of life, and Hoboken newcomers.

That leaves over 50% of the city remaining for a challenger to mine votes: namelyamong the born and raised old Italian populations, and in the Housing Authority Hispanic sections of town; and among themore conservative financial sectors of the city, includingany pro-development voters.

The trouble for a challenger – and this is what 2nd Ward Councilwoman Beth Masondiscovered when she tried to run a fusion ticket – is that it's very difficult to promise not to cut city jobs to the born and raised base, whilesimultaneously promisinglower taxes to the yuppies. It's difficult for someone to articulate in slogans an anti-development platform while also being pro-development.

Cammarano managed to master a one-Hoboken mantra, but only with a long campaign runway, and some other skills. His critics would say they were skills that didn't necessarily lend themselves to good government.

In a special electionlike this, there's no 50% plus one rule. It's winner take all, same as it was in 1992 whenreform candidateBret Schundler became mayor of Jersey City withless than 20%of the vote.

That's good news for Zimmer, who right now owns 49% of the vote in Hoboken, although Mason backers argue that part of that support comes from the 2nd Ward councilwoman's runoff endorsement of Zimmer.

After the Council President, there's noobvious threat, no one who jumps out to assume the role of counterpoint.There are plenty of probable spoilers. Sources say Mason may run again, but Zimmer already defeated Mason, and cornered the good government reform vote, in the processexposing Mason's vulnerabilities outside her own 2nd Ward.

There are those who believe with the right cornerman, Masoncould do significantly better.

"Beth Mason is very credible," said veteranHudson County political consultant Paul Swibinski, who worked for Cammarano."That's awoman who should havebeen elected mayor. I remember looking at polls back inDecember, which showedCammarano at3% and Mason at 27%. She ran theworst campaign ever -I've been around for 30 years – and shecan'tescape culpability for it, but I think things could be different with one person in charge."

There's also the potential, in a crowded field, for 3rd Ward Councilman Michael Russo to get in the contest, but his born and raised base could be chopped into pieces by perennial, can't-resist-a-run candidate Frank "Pupie" Raia.

Assemblyman Ruben Ramos (D-Hoboken), a born and raised who served as a 4th Ward councilman before securing an at-large seat,is definitelystaying out of a mayoral contest, according to sources.

"As Peter took the oath of office,I hadthissinking feeling that i didn't have a Plan B," said Hobokennative Perry Belfiore."For a while now I've feltthatI was about to surrender to someone who was not born and raised. That turned out to be Peter. I felt comfortable. But now it's a South African situation where the disorganized majority will be ruled by an organized minority."

An environmental engineer who can raise money, Novak was going to run for mayor with the slogan, "He's going to remediate Hoboken," and he could try to sell himself as the numbers cruncher Hoboken needs to cut taxes and reduce the size of government.

Of course, there's the Cammarano association problem, although Swibinski thinks Novak's still sufficiently a newcomer not to be damaged.

"Mike was going to run for mayorand I talked him out of it, and convinced himto run with Pete Cammarano – and he is still talking to me," said Swibinski. "He's avery appealing candidate, but Idon't think he'll run. Mike andI have talked about it and my sense is he's not going to do it."

The Schundler story may fill Republicans with a sense of history now as they seek targets of opportunity for Christie in a gubernatorial election year. However, their efforts to recruit a Wall Street outsider to run for mayor on the Christie ticket could simply imperil their gubernatorial candidate's chances of pilfering votes in heavily Democratic Hoboken.

Zimmer accomplished what she did – nearly beating Cammarano – in the face of theDemocratic Party machine.

An independent Dem, she's no big Corzine fan. But if Christie or his Republican allies activelybacked a candidate against her, Zimmer and company could be antagonized straight into the Corzine camp. Even with the specter of Cammarano, the last thing the GOP wants is to give Zimmer'sgrassroots minionsan invitation toattachthemselves completely to the machine in this Democratic Party stronghold.However hampered, it's still Hoboken.If they leave her alone, some of the independent streak in her could wear off in Christie's direction. 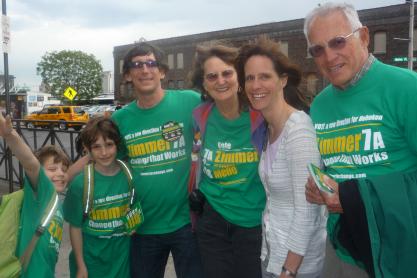