While it appears that Democrat Jon Corzine will go first (there is considerable speculation that he wants his running mate in place before President Obama campaigns with him in Holmdel next week), Christopher Christie continues to mull his own pick for a GOP Lt. Governor candidate. The conventional wisdom, at least right now, is that Monmouth County Sheriff Kim Guadagno is at or near the top of the list. Also under consideration: Assembly Minority Whip Jon Bramnick (R-Westfield), Bergen County Clerk Kathleen Donovan, and State Sen. Diane Allen (R-Edgewater Park).

Guadagno, who has never appeared on a reality TV show, was elected Sheriff in 2007 after serving as a Commissioner in Monmouth Beach. A career prosecutor, Guadagno served as Deputy Director of the Criminal Justice Division in the state Attorney General's office, and as an Assistant U.S. Attorney in New Jersey and in New York. Her husband is Superior Court Judge Michael Guadagno. 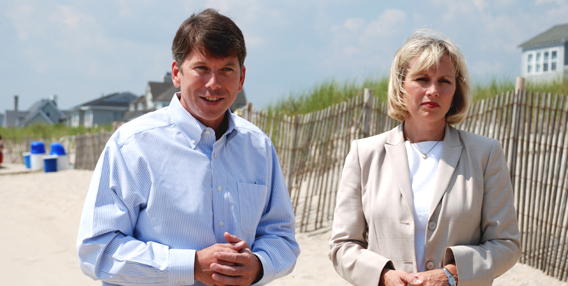