"State director of the 2.0 program for victory 09," said Mueller.

Chief political operative for the New Jersey Regional Council of Carpenters, Mueller is a Camden native with close ties to Assembly Speaker Joe Roberts (D-Camden) and granddaughter of a Local 19 sheet metal worker who first started working campaigns for her father, a telephone installer who served as the youngest mayor of Oaklyn, New Jersey. 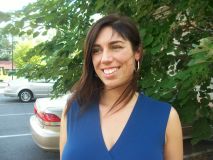