HOLMDEL – Not in the lieutenant governor mix anymore, State Sen. Dana Redd (D-Camden) accepts the role of emcee with President Barack Obama and Gov. JonCorzine apparently in the wings.

"We are going to re-elect Jon Corzine in 'O9,"says Redd, a candidate for mayor of Camden, who proceeds to bash GOP gubernatorial candidate Chris Christie and his minions as bedraggled Bush cronies.

"George Bush's disastrous policies" is what Redd blames for the economic wreck,shifting to Vice President Joe Biden's comment on June 2ndabout who hecalled when he wanted economic advice: Corzine.

"It was Jon Corzine who had the vision to get the state's fiscal house in order during his first three years in office," she says.

"Chris Christie was a loyal Bush fundraiser and a Bush appointee and he wants to bring Bush's policies to New Jersey," yells Redd. 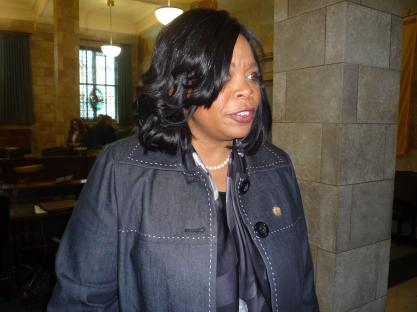