NEWARK – President Barack Obama lands on a stage today against the backdrop of a party frantically trying to figure out what to do about Gov. Jon Corzine's apparent number one choice for lieutenant governor, an African-Americanreality TV star with degrees from MIT, Oxford University andRutgers UniversityandCEO of asuccessful technology consulting firm in Newark who nonetheless has never held public office.

Corzine confidantes kept kicking other names around on Wednesday even as Pinkett's supporters argued in favor of his selection.

"The establishment is always wary of change and something new," said state Sen. Ray Lesniak (D-Elizabeth). "The establishment lined up behind Hillary, not Obama, even the black establishment. They also backed Dick Leone over another Rhodes scholar who did well, Bill Bradley."

By contrast, when state Sen. Ronald L. Rice (D-Newark)peeked at Pinkett's resume – heavy on corporate cred and thin on grassroots – he received an early negative vibe.

His son, Newark West Ward Councilman Ronald C. Rice, a Joshua generation leader who was one ofObama's first impassioned supporters among New Jersey elected officials, celebratesPinkett's decision to open his firm in Newark where he participates in a business incubator program with the New Jersey Institute of Technology (NJIT).

But he toohas questions. A lot of them.

"My fear is I don't know where he (Pinkett) stands on the issues that affect New Jersey," said the younger Rice.

He wonders if Pinkett is ready for a grueling statewide contest as his first sally into politics, questions how much name ID Pinkett truly has as the former star of Donald Trump's show "The Apprentice," and finally questionsthe 38-year old's readiness given his absence of political and government experience.

"Do I think he's qualified, yes, I do, and if the governor chooses him I would campaign my heart out for him, but it's definitely a leap of faith," said Rice. "I would want to talk to him. I would want to hear his views on the issues. I would want to know, for example, how he sees the role of cites leading the statewide comeback, culturally and economically. How does he envision making thata reality? What is his plan for jobs creation – for those young professionals with degrees, and for those low-skilled workers. I would want to know how we really make New Jersey one New Jersey, so we're not separated by black and white, urban and suburban? We are a progressive state, but we are disjointed. How does he see us bridging that gap? I would want to hear his views on Abbott School funding, on pay-to-play, on police brutality."

Although open to the possibility of Pinkett, like his father Rice alsoharbors deeper questions about a pure business profile – a worry that at least one prominent Central Jersey Democratic Party political operative, speaking on condition of anonymity, said would likely drive him away from his own party's ticket.

"There has to be a balance between government and political experience and private sector experience," said Rice. "When we ran in 2002 and 2006 (the Booker Team), we didn't have a lot of experience, but we weren't political neophytes. Dana Rone came from a community activist base. Cory (Booker) was a councilman. I grew up with this balance between reform and having a working knowledge of what you're trying to reform. Not knowing the beast will get you eaten by the beast."

Others wondered if the New Jersey Democratic Party is by definition sojaggedly cut upinto fiercely and jealously guarded turfsthat Corzine has no choice but to pick someone who has no experience.

"Look at (Ronald) Reaganwhen he ran for governor of California," he said. "(Michael) Bloomberg as mayor. …And Pinkett's a fast learner. If you're looking for perfection, you'll never find it. Perfection should never be the enemy of the very good."

In that vein, Trenton Mayor Doug Palmer, himself a short-list prospect for lieutenant governor before other names such as state Sen. Loretta Weinberg (D-Teaneck), state Sen. Barbara Buono (D-Metuchen) and Pinkett rose in the Corzine inner sanctum, said he could enthusiastically support Pinkett if Corzine goes with him.

"I've met him and I've seen him interact with young people and I think he could inspire and motivate people with his story about making a difference," said Palmer. "He's new, intelligent, bright, and certainly he's been in front of a camera. He's from Mercer County (East Windsor). I think he would represent New Jersey well."

But many Democrats could already see – and dread – GOP gubernatorial candidate Chris Christie or his running mate looking into the TV camera, addressing Corzine,and doing a roof-raising imitation of Trump's "Apprentice" tag line, "You're fired." Still others saidby way of ducking a political bulletthat they thought Trump had copyrighted the line, while in entrenched anti-Pinkett quarters the words "Sarah Palin" drifted across the pair of more than several quivering Democratic Party lips.

At a dinner of Middlesex County Democratic leaders two days ago, in a county where the governor received 67% of the vote in the June 2nd Primary, the presence of Pinkett on the horizon caused at least one tableful of electeds to affirm that they intend to sit out the gubernatorial election.

"What's Jon Corzine ever done for me," said a Democrat, speaking on condition of anonymity. "Now he's telling me he wants two guys from corporate America?"

While by contrast a big Corzine fan who's signed on as a surrogate for the governor and still willing to give Pinkett a chance, the choiceremainsin crisis for CouncilmanRice untilhe actually talks toPinkett about the issues.

"I don't think Randal wouldrepresent a corporatization of government," Rice said. "He'snot a stuffed shirt. He walks through that door and he makes corporate America shake a bit. I will tell you that (Rhodes Scholar) Randall Pinkett's no Sarah Palin. I'd put Pinkett against Palin for governor of Alaska."

But asthe presidentmounts a stage in Holmdel today and hitches the governor to his starpower in an effort to hoist Corzine out of his double-digit mid-summer deficit, politicians like Rice are under no illusions that Pinkett would be another Obama, who wasn'ta corporate businessman but a community organizer beforebeingschooled in ward politics, Chicago-style. 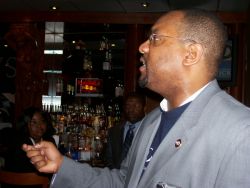