A federal judge has sentenced former Senate Appropriations Committee Chairman Wayne Bryant to 47 months in prison for trading millions in state grants for his own pension-boosting job at UMDNJ's School of Osteopathic Medicine (SOM). Bryant had been found guilty after an eleven week trial past November.

The jury found that Bryant used his power and influence as the head of the Senate appropriations and budget panel to deliver millions to the SOM, where he had a $40,841 no-show job.

"We are pleased with the sentences, particularly with Wayne Bryant," said Acting U.S. Attorney Ralph Marra. "He was long among the most powerful, entrenched political figures in New Jersey. He soon will be off to prison for four years. That is a powerful image and should stand as a deterrent for other elected and non-elected officials." There is no parole in the federal system.

Weysan Dun, the Special Agent In Charge of the Federal Bureau of Investigation's Newark Field Office, says that his office is "doing everything we can to end this culture of ‘quid pro quo', of payoffs, and preferential treatment that plagues New Jersey government."

"But corruption is a cancer and you can't cure it with just one treatment. Today's sentencing of Wayne Bryant, is just one more step in our unrelenting focus on corruption," Dun said. 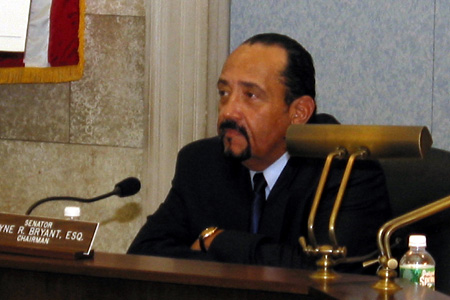