PATERSON – Elected last week by his peers to lead the governing body of the state's third largest city and with a mayoral race on the horizon, Council President Jeffrey Jones said he cannot honestly give Gov. Jon Corzine a passing grade as governor and would entertain the possibility of backing former U.S. Attorney Chris Christiefor governor.

"I'm not saying I'm backing Christie, I don't know Christie – but I've been bamboozled in the past by Democrats," said Jones, a Marine Corps vet and college professor who's emerged asa leading African American challenger to Mayor Jose "Joey" Torres, who sources say intends to run for his third term next year.

A staunch Corzine fan, Torres praised the governor's budget cuts earlier this year in a conversation with PolitickerNJ.

“When you look at the numbers, a majority of people are helped by the good things in this budget,” Torres said. “From my perspective – and I’ve been at this for a long time now – this is the first time a governor has come in with a coherent vision to get us out of a financial crisis, while also covering our educational needs.”

Irritated by Torres' close relationship with Corzine and the Corzine administration's Department of Community Affairs (DCA), Jones said part of the governor's job includes finding ways towork with the entire city council, which Jones said Corzine's people have not done.

But it goes beyond miscommunications in Paterson, in Jones' view, to statewide issues and a statewide agenda.

"A statewide agenda? I don't think we have one," said Jones. "Until leadership understands their role of bringing people together and reaching across the divide, I don't think the Democrats are well positioned for this coming gubernatorial election."

A primary time supporter of Barack Obama in the 2008 election cycle while Torres backed Hillary Clinton, Jones has been critical of what he sees as the Democratic State Committee's sluggish response to the grassroots wing of the party that backed Obama early.

He's willing to give Christie a hard look.

"For 25 years we've been polishing this jewel in the rough called Paterson and it's been polished with what we might call a left-handed approach," said Jones. "I've got no problem being the maverick Marine out there." 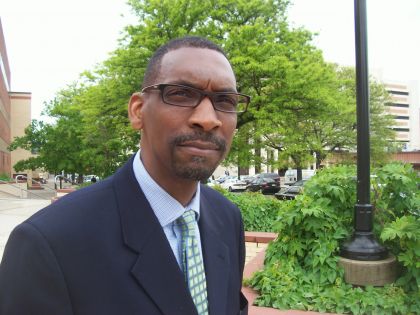