NEWARK – After nothing but negative feedback from the party – with the exceptionbeing state Sen. Ray Lesniak (D-Elizabeth), who liked Pinkettand gave hima plug when asked about his prospects as a candidate for lieutenant governor, and ascathing Star-Ledger editorial begging Corzine to return to "reality," reality TV star/Rhodes scholar Randal Pinkett late last week looked DOA for LG.

But in an oval court room here today at Rutgers University, where Pinkett supporters appeared to outnumber the press corps — and where his allies blasted the pressfor its treatment of Pinkett -the Somerset businessmanformally expressed his interest in the job of Gov. Jon Corzine's running mate.

"I am an ethusiastic supporter of Gov. Jon Corzine – and I will continue to support this governor regardless of the outcome of this particular episode," said Pinkett. "I support the Democratic Party's efforts. I am here this morning to directly address (speculation) aboutmy candidacy for lieutenant governor."

He acknoweldged thatit is hisunderstandingthat he is "one" of Corzine's candidates for lieutenant governor.

Pinkett said the governor's team approached him, and he said he was extremely honored.

"The defining quality is leadership, not whether one has political experience," he added. "I welcome this opportunity to balance the conversation."

For at least the past two weeks, sources close to Corzine have described Pinkett as the frontrunner for the running mate job. Then, after word leaked that the PhD holder with no political experience was heading the governor's shortlist for a statewide run, party members on and off the record unleashed a motherload of worry.

Phil Alagia's attendance today signified atthe very least somesmooth-over on behalf of the Democratic Party. He's the statewide political director forthe governor'sre-election campaign, a job he has not yet started.

"He's a private citizen – still is," Pinkett ally Dr. M. William Howard Jr. said inhis introduction."The fact that the press would target him is an unethical assault. Even if approached he reserves the right to give his consent. …The only time I ever watched 'The Apprentice' was when he was on the program I felt a sense of pride when he won the contest.

"But the notionthat people would equate his performance on that TV program with his stellar academic and professional experience just leaves me scratching my head," added Howard."I would say they would be blessed to have him."

Pressed by a reporter about why he would hold a press conference now, in the waning days of the LG decision process (the state deadline is Monday), Pinkett said, "No, this is not an attempt to put any pressure on Gov. Corzine. This is a good faith effort to balance the conversation."

Floated over the weekend as an LG prospect,a rumorhe quickly flattened, Essex County Executive Joe DiVincenzo said, "I wish the rest of New Jersey would get to know Randal the way I know him." 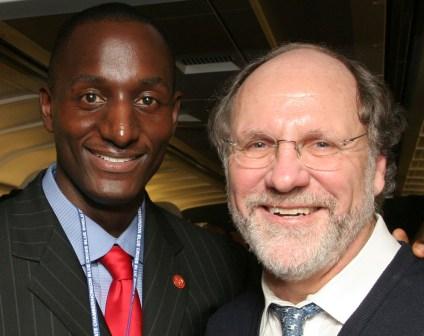