Somewhere a crowd gathers in Bergen, buthere in agazeboin Hudson County, a solitary figurein white shirt sleevesstands at the precipitous edge of the palisades with the maw of the river and Hoboken and Jersey City and Manhattanbelow as he talks onacellphone.

"I didn't even know there was a rally today," he says, folding the phone in one hand, referring to Gov. Jon Corzine's rollout of running mate, state Sen. Loretta Weinberg (D-Teaneck). "Where isit? What's going on?"

It's not as though Stack's home turf is stagnant in the blaze of summertime, or as if Stack ever really has a tendency to gravitate away from Union City.

"I'm always here," he says with grin,but on this occasion it looks like an especiallylonely vantage point, considering the fact that on Thursday, sections of theDemocratic Party infrastructure caved with the FBI arrests of numerouspolitical operativesand officials, most of them fromJersey City.

Down there in Hoboken, which sits in Stack's 33rd Legislative District,residentsright now storm theblock of Peter Cammarano to protest his decision to remain mayor of Hoboken as he fights federal corruption charges.

Insiderssay Stack never craved the company of too many other politicians – enough to fill out a line or the seats on a local commission.

Heran against the machine in his 2007 senatebid and destroyed it with a 77% to 23% victory over the Hudson County Democratic Organization-backed West New York Mayor Sal Vega. Since then he has mostly stayed on a "hello" and "goodbye" working relationship with officialdom.

In a gubernatorialelection year in which thechief protagonist runs down by double digits in some summerpolls, it's not surprising to findStack here alone in a pocket park turned community pool with a grand opening upcoming, on arguably Corzine's second biggest campaign day to date following last week's appearance with President Barack Obama.

No Weinberg-brand reformer, Stack two years ago opposed Corzine's attempt to ban dual office-holding, and survived as a mayor/legislator only after leadership won a grandfather clause for current double-dippers like Stack.Arguably toxic to Corzine outside of his base,insiders on both sides of the political line also don't forget an unresolved Stack subpoena delivered by the office of then-U.S. Attorney (and now hard-charging GOP gubernatorial candidate) Chris Christie.

If his proclivity anyway during down-time budget hearing sessions is to get on the Blackberry and communicate with City Hall and street sentries about Union City matters rather than shmooze with the Trenton power elite, these obvious factorskeep Stack relegated to regionalduties far from the Corzine-Weinberg spotlight.

But how Stack motivates his base for Corzine – if he does at all given histenuoussituation – becomes another question, increasingly relevant in a county where the state's largest number of Democratic Party votes are concentrated, a countywhich todayappears hardly energized with the sense of a second Corzine term, and limps badly in the wake of Thursday's arrests.

"There's no morale, no motivation to do anything," saysone Hudson County source.

There's even talk that Stack and fellow dual officeholder Mayor/Sen. Nick Sacco intend to sit this one out, a theory Sacco strenuously denies.

"I'd never fall asleep during an election," Sacco tells PolitickerNJ.com in a phone interview. "I'm a Democrat and I'm endorsing the ticket of Gov. Jon Corzine and Sen. Loretta Weinberg. Our governoris here ata difficult time, andhe's being blamed for the problems we're having, but it should be remembered that hewas cutting back costs when he and every other governor in the countrywere hit by this economic tidal wave.

"No i wasn't invitedto the Weinberg event, but don't read anything into that – takeit as an oversight," adds Sacco, who for months wasn't on speaking terms with the governor, but who maintains closer ties to the HCDO than does Stack.

Then there are those who still nurse anger over what they see as Corzine's failure to protect HCDO leader (and state Sen.) Bernie Kenny (D-Hoboken) from – of all people – Stack, in that 2007 campaign.

"It was a serious budget – one of the best, most honest budgets the state's seen in years, and Kenny was a bulldog for Corzine," says another Hudson source. "To make that bill what it should have been, Bernie pissed off a lot of powerful people – people outside of Hoboken -and he did so for Corzine. A year later, those powerful people supported Stack when he went after Bernie. Bernie depended on Corzine, but Corzine didn't help Bernie, and the word around here became: if you help out Jon Corzine, you're on your own."

For his part, having forced Kenny out of the race and beaten the HCDO, Stack doesn't hold any great faith in the county's organization's ability to generate huge numbers in any circumstances where there is dedicated opposition.

"I think the machine has lost a lot of its luster anyway," he says. "There's a level on which the machine works and that is, it throws a lot of money around, generally in the final weeks before an election. My strength has always been walking the neighborhoods,and that kind of heart in a campaign whose biggest mistake is to rely only on money is ultimately the only way to drive votes. It will be difficult for Governor Corzine this time, no doubt about it. I don't think these arrests hurt him. I'm not exactly sure if the voters will hold any one person responsible.Certainly, it's possible to translate results from one politician, like a mayor, to a governor, if the message is clear and if you can show the accomplishments on the streets where the people live.

"The people here have trust in me – trust built over the course of five years that I've served as assemblyman and senator and nine years as a mayor," says Stack. "Am I corrupt? No. I'm a workaholic. Anyone who wants to write off Hudson County as corrupt because of those arrests, or try to identify a Hudson County mentality, should first look at individuals, and I am an individual."

He hasn't tested his strength lately.

In this year's Hoboken mayoral election,he initially leaned toward 2nd Ward Councilwoman Beth Mason early, walkingthe business management consultantthrough a crash course in Hudson County base-building. But ultimately he stayed out of the contest, he says, unconvinced of Mason's motivation to work all the neighborhoods of her city.

"I didn't think it was right to get involved in Hoboken," Stack says. "Hoboken in that campaign was divided and I'm the senator of the district. Why pick a side when I have a base of support in Hoboken with (Assemblyman) Ruben (Ramos)? Why divide the community even further?

"I feel sorry for him and his family," he says of Cammarano. "It surprised me. Atthis point, you're only getting one side of the story. I never had a close relationship with Peter. He worked on my 2007 Senate campaign under Angelo Genova, a young guy. I didn't know where his future was."

This is the county – and in point of very cold fact, the town – where Union City MayorWilliam Musto once rode outcorruption charges through an election campaign and declared before cheering supporters at the old Italian Community Center when he defeated Bob Menendez, "This is the real jury."

But it's also a gubernatorial election year.

Insiders believe Corzine picked Weinberg not only because of his personal comfort level with her, but specifically because of her record as a vocal opponent of the Bergen County Democratic Organization and former chairman Joe Ferriero, who faces federal corruption charges and is scheduled for courtin thefall.

A grassroots, as opposed to a countywide machine player.

"I think Loretta brings a level of credibility because of her independent streak," says Stack. "I also think it's great for the women of New Jersey."

He doesn't believe Corzine is without accomplishments, but he offers no comment when asked who he intends to support in the gubernatorial election: Corzine or Christie.

Right now, he's far from the Corzine '09 crowd,and projects no firm sense ofknowingwhere he and his supporters willstand on Election Day -other than somewhere in Union City. 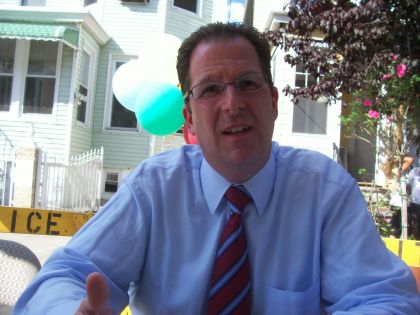