BERGENFIELD – This was a decidedly Manny Pacquiao crowd here gathered for the Filipino Heritage Festival, where images of the world's pound-for-pound greatest prizefighter abounded.

Althoughnot ostensibly a boxing contest, under the mid-summer hoopla in this precious voter stronghold of Bergen Countycould be identified twofierce politicalcamps: one in the corner ofGov. Jon Corzine andorganized by former Bergenfield Mayor Roberto Rivas and the other backing former U.S. Attorney Chris Christie and bucked up by the Rev. Gaudy Soriano, pastor of Faith Restoration Center Inc. of Jersey City.

Sorianois a big Christie fan going back to when the two men shared a stage at the funeral ofthe Glenn D. Cunningham, the mayor of Jersey City.

Soriano saw a third speaker, the Rev. Al Sharpton, gearingup to speak on that day, and promptly collared a Cunningman handler and asked that Christie be allowed to talkbefore Sharpton, lestthe lawman'sremarks get loston the other side of thefamouslyflamboyantpreacher.

"I think people see him as an everyday man who is upset about the situaton we are facing in New Jersey,"the reverendsaid today as he made the rounds with Christie from one vendor's booth to the next in a town dubbed Bergen's little Manila, home to 15,000 Filipino-Americans.

Rivas and Corzine have their own tight connection, and indeed, when the governor climbed out of his SUVlater in the afternoonwhen Christie had left and saw the former Bergenfield mayor in the crowd, he showed an old picture of the two men campaigning together, when Corzine had more hair and Rivas' head of hair was blacker than it is now.

"His heart's in the right place," Rivas said of the governor. "His policies are for the people, and not for his friends."

Soriano and Rivas like each other and have worked together for years, overlapping their political and spiritual ends in venues such as the one that drew both Corzine and Christie tomingle in a crowd of beauty queens andshort order chefs, baby strollers andDora dolls,here at Veterans Memorial Park.

This time, they're firmly parting company.

"As an American, I believe we shouldwork and be paid for what we work for and I'm against big government and high taxes,' said Soriano. "I don't like special interest politics where you pander todifferent ethnic groups, and I feel that's what the Democratic Party does. For the last 40 years, we've given to theDemocrats and we've lost with them and now we need to try something different."

Hesayshe's tryingtonudgeRivas away from Corzine and into the "R" column for a change, but Rivas, who ran off-the-line and defeated Joe Ferriero's machine in 2000, says there's no way, he's loyal to the governor, in a town where President Barack Obama beat John McCain in 15 out of 17 voting districts to get nearly 58% of the vote.

When asked in a follow-up if his comment about Corzine's political motivations contrasted with Christie's, the former mayor didn't hestitate to explain what he meant.

"There are some things that are somewhat disturbing about Christie, and I think among them is Christie's appointment of his former boss, (Attorney General) John Ashcroft, to a job where he stood to gain millions. I don't think this governorhas ever done anything like that. I don't think he's capable of that," said Rivas, who received a subpoena from the U.S. Attorney's Office in connection with the Ferreiro corruption probe, which Christie spearheaded.

Ginned up in part by Christie's presence in the gubernatorial contest, the reverend also dissed the governor at the Filipino Parade on June 28th, ordering the caravan to "forward, MARCH!!" despite Corzine's absence. NervousDemocrats who told Soriano that Corzine was late and wouldbe there promptlyfor the pomp and circumstance and why couldn't he please just hold offuntil he arrived were met withwith the terse reply, "This is the people's parade not the governor's."

Neither Rivas nor Soriano knows this way the gubernatorial contest will break this year, as they assess a community that doesn't come down rigidy into either political party.

"Talk to professional Filipinos – doctors, nurses, teachers – and they're Republicans," Soriano said. "Among those who are not properly informed – overwhelmingly Democratic."

"I've been a Democratic since the beginning," said Rivas. "But I can remember a time when this state was run by Republicans. My parents were Republicans. But Democrats have found a product that resonates with voters here. I think most Filipinos are probably more on the Republican side, but if you engage them, they'll listen. What we're facing now, more than anything, is apathy. That's what we need to fight."

Both candidates were well-received here.

Later, Corzine walked with Assemblyman Gordon Johnson (D-Englewood) and Rivas – two foes in 2001 when the latter tried to challenge Johnson off-the-line in the 37th District and Johnson destroyed him.

"I want to recommend the pork barbecue," Corzine yelled to the crowd from atop the stage following Rivas's introduction, a perch Christie couldn't secure when he appeared owing to the youth talent show then dominating the program.

"This is a wonderful time to celebrate diversity," the governor added, before the microphone died and he spoke soundlessly above the heads of a squintingaudiencewhere shoutsbefore too longpunctuated the silence, "Louder! Louder! Turn it up!"

Someone did turn it up, in time for Corzine to get in the line, "Barack Obama is coming to the Garden State!" which triggered applause.

Some Corzine partisans had staked out conspicuous territory with signs while Christie had campaigned earlier. The Republican had rougishly advanced on them and shaken their hands with a good-natured, "Fellas, how are you today?" Now, Christie signs appeared as the governor spoke, one thrust aloftby GOP operative Frank Luna.

"It's a Democratic system," Rob Briedas told the governor, grinning between two outstretched arms, which waved a"Christie" sign in Corzine's face ashe worked the front row after his brief speech.

"I'm not offended," said the governor, who moments later grasped the hand of another "Christie" guy who told him, "The taxes are killing me."

"I'm a Jersey girl andwhen I go out of the state and tell people that, they tell me, 'You poor thing,' and I don't feel very good about that," said the retiredhigh school teacher. "I was a member of the union when I taught, but there comes a time when you have to say, 'Enough is enough.' I admire him (Christie) for the fact that he didn't seek support of union leadership. He was being honest."

Two Bergenfield cops approached Christie during his swing through here prior to the governor's visit and posed for pictures in a "lawmen only" moment wherethe word "sir" could be heard spokenat the edge of reverence.

Agnes and Joseph Quimson said as far as they were concerned, Corzine was the man.

Everywhere, Rivas and Soriano moved and led the two sides, each quietly mobilized against the other as yet another young singing duo seized microphones and went way into the upper registers on "Wind Beneath my Wings."

When Soriano prompted vendor Ray Carrillo of Teaneck to vote forChristie, the latter said in between handling hot plates of food, "No, I like Corzine. He has money, I figure he doesn't need money the way most politicians do, which gets them into trouble and compromises them. Corzine has money, therefore he's not corrupt."

"But Christie putall those guys in jail by fighting corruption," Soriano protested.

Carrillo shrugged and shook his head. 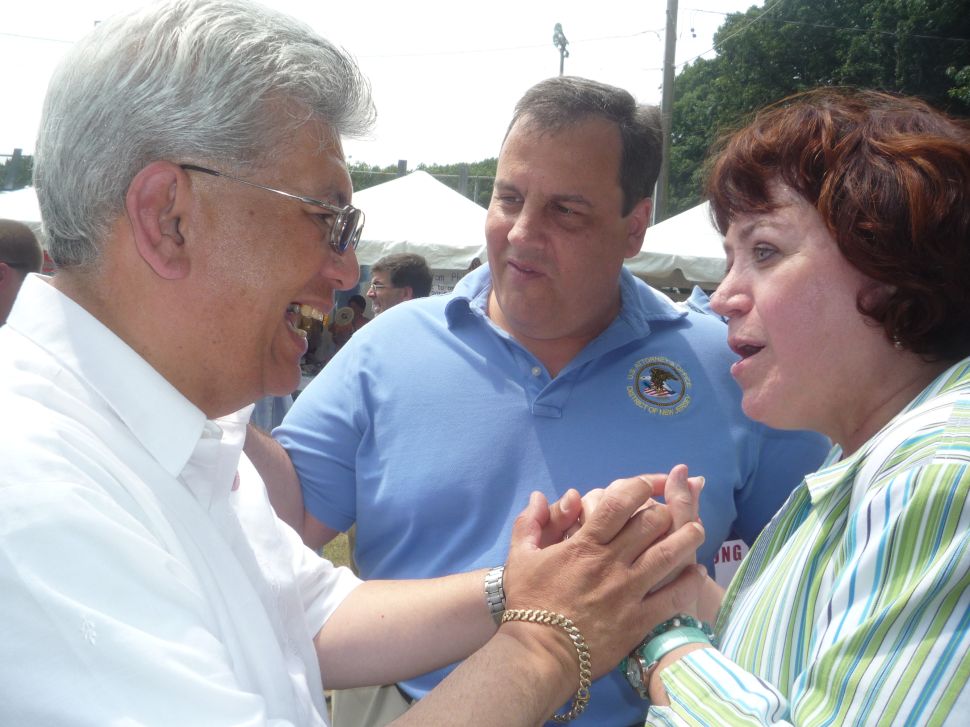