Third Ward Councilman Michael Russso greeted Dawn Zimmer warmly and stood with the coterie of councilpeople who formed a half circle behind her as Clerk Jimmy Farina swore her into office as Hoboken's first woman mayor.

Later, Russo wouldn't rule out a challenge to Zimmer, saying simply "no comment," when asked.

"I am supporting Dawn Zimmer to be our acting mayor," said Russo, son of former Mayor Anthony Russso and an emblem of old Hoboken with roots that stretch back into the pre Frank Sinatra era.

"This is about good government right now, we need to move our city into a positive light," added Russo, whose onetime ally and collegaue, Peter Cammarano, submitted his letter of resignation three hours earlier as he continues to fight federal corruption charges.

Russo said he had heard rumors of people who want to run Judge Kimberly Glatt for mayor in the November special election, but wouldn't confirm that they're going anywhere.

"I think that after something like this, people are going to look for members of the clergy and the courts to come in clean things up," Russo said.

Russo had himself examined running for mayor earlier this year but ended up backing 2nd Ward Councilwoman Beth Mason, a financial consultant and relative newcomer to the wharf town turned salad wrap stonghold.

Their alliance of 2nd Ward money and 3rd Ward shoeleather failed to catapult Mason into the mayor's chair. 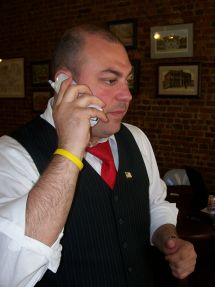