SOMERSET- The First Baptist Church of Lincoln Gardens dominates the streetscape in this gritty stretch of Franklin that laps at the edges of New Brunswick, and at the pulpit on a Monday night,where summer Bible study has packed the outsized parking lot and filled the rows with congregants, the Rev.Pastor DeForest "Buster" Soaries, Jr.opensthe Good Bookand urges scrutiny of a certain passage.

Simultaneously, in theenclosures of political power, Gov. Jon Corzine and his alliesare squinting extra hard at one of Soaries'church members: Dr. Randal Pinkett, a technology consultant, Rhodes scholar, family man, nice guy,cunning victor of Donald Trump's reality TV show "The Apprentice," and celebrity, who liveshere in Franklinon the other side of town.

Pinkett's also studyingCorzine – and the political situation around Corzine -to determine if he wants to run and potentially serve as the state's first lieutenant governor.

"I recommended Randal," Soaries tells PolitickerNJ.com when the pastor repairs to his chambers after delivering his sermon. "If he can afford to do it, I thought he'd be a great, fresh face. I gave Randal his first contract here. He's thoroughly honest. The fact that he doesn't have any government experience when it comes to New Jersey politics, I think is a blessing. Of course, our trouble is that pay-to-play is built into the fabric of New Jersey politics. The fact that Randal is pure – from a political perspective – is refreshing."

"I was the first person I heard suggest that thegovernor look at Randal, but I don't talk to everybody, maybe someone else suggested him, too," says Soaries, who was himselfinspected for the lieutenant governor's job by both Corzine and independent gubernatorial candidate Chris Daggett.

"I was against the lieutenant governor's position from the beginning," he says. "I didn't believe the proposition was right. I thought the secretary of state should be acting governor until there was another election, but I didn't believe we should create a new job position. We can't afford another layer of bureaucracy. In addition, the job lacks definition. Why would I accept a job like that?

Moreover, he recognizes the presence on the statewide landscape of Newark Mayor Cory Booker, who Soaries says the Democratic Party has all but annointed as its 2013 gubernatorial candidate. Whoever becomes lieutenant governor would by definition, at the very least, possess the potential for governor, and possibly the state's next governor. But with Booker in the wings, Soaries doesn't want Pinkett to get hurt.

"What I'm going to adviseRandal is simply that he counts the whole cost," says Soaries, who adds, "I like Cory better for senator, paticulalry since his weakness has been management. He'd be a great cheerleader for the issues. But we need a governor who has true, entrepreneurial instincts. Look, I love Corzine, I think he's a great guy.But I think he led Goldman Sachs, he didn't create Goldman Sachs. Do you see? Bloomberg created Bloomberg. We're talking an entrepreneurial versus a corporate skill-set. We don't have that entrepreneurial skill-set coming from the State House right now."

Soaries, who told his congregation last Sunday that he believes Pinket would be a great lieutenant governor, admits his friend does not havea nuts and bolts knowledge of government – and that's a weakness.

But he believesPinkett does have entrepreneurial instincts.

"He has the name ID that could excite blacks and he has the business credentials that can get the respect of whites," says the pastor. "Of course, there's a difference between the black electorate and black elected officials. Corzine is so fundamentally idealistic – I don't think he's really measured the pulse of black elected officials, who might, yes, resent the presence of someone like Randal coming from the private sector."

It all has to be done in a very street savvy way, which, the pastor acknowledges, is not an attitude necessarilypart ofCorzine's corporate skill-set.

Sources close to the governor say Pinkett's not a done deal from their perspective.

"We're dating – and close to getting engaged," was the off-record assessment coming outof the darkened end of a phone on Monday night.

Whatever the governor – and Pinkett himself – decide to do about LG won't impact Soaries, he insists.

Although "I'm done with the Republican Party," he admits. "I don't think ablack person can justify being a Republican today. Their mission is to appeal to white voters to get them more excited as opposed toappealing to the whole country and getting them involved."

He worked hard to elect President Barack Obama, but doesn't know who he'll endorse for governor, if anyone.

"I'll probably do nothing," he says. "The only thing that will compel me to get involved is if I see the governor so far behind, or if Chris (Christie) does something outrageous. Otherwise… I'm done with elections."

The person he's least likely to endorse is GOP challenger and frontrunner Christie – the only candidate running for governor who to date hasn't visited him.

"The fact that he hasn't been here is just stupid," says Soaries. "He's gone to black preachers who would never support a Republican, and here I am, who have supported Republicans going back to 1980 – with the exception of Florio over Whitman – and he hasn't been here."

"You know why I like him? He listens. He'sprobably the only candidate in the race who doesn't have this messianic sense about him. Butindependents don't win in New Jersey. We probably need someoneto govern the wayJesse Ventura said he wouldgovern in Minnesota. But New Jersey is not Minnesota. Yes. we have independents -these are non-affiliated voters who break to either party – but we don't have independent thinkers, and that's the problem. I told Chris Daggett I don't think he can win."

In the sprawl zone of Franklin, a New Jersey microcosm as its mayor, Brian D. Levine, often identified it on the gubernatorial campaign trail earlier this year, the neighbohoods span from old time cattail and hayseed historical to blue collar scrappy to middle American Rockwell to crammed condo and COAH key-ins to something approaching the 21st Century American Dream to full-blown McMansion heaven.

Although his church is situated inthe black working classsection of town,Pinkett livesinan upscale neighborhood of mixed races – predominantly black, white and Indian- about four miles from First Baptist in a span of suburb jammed with the houses of worship of half a dozen – at least to a lazy eye – world religions or denominations.

At a shopping center around the corner from his house, the random passersby pushing shoppingcarts meet the shouted out name, "Randal Pinkett" with blank looks.

Everyone's friendly, but to a man or woman they don't know who he is.

"Never heard of him," says the guy behind the coffee counter.

But back at First Baptist, where the adults on Mondaycrowdthe main church and the children ascend two scaled down "Gone with the Wind" staircases that roll upward on either side of the main lobbyand fill their own classrooms for Bible study,where everyone knows the Rev. Pastor Buster Soaries, everyoneknows Dr. Randal Pinkett. 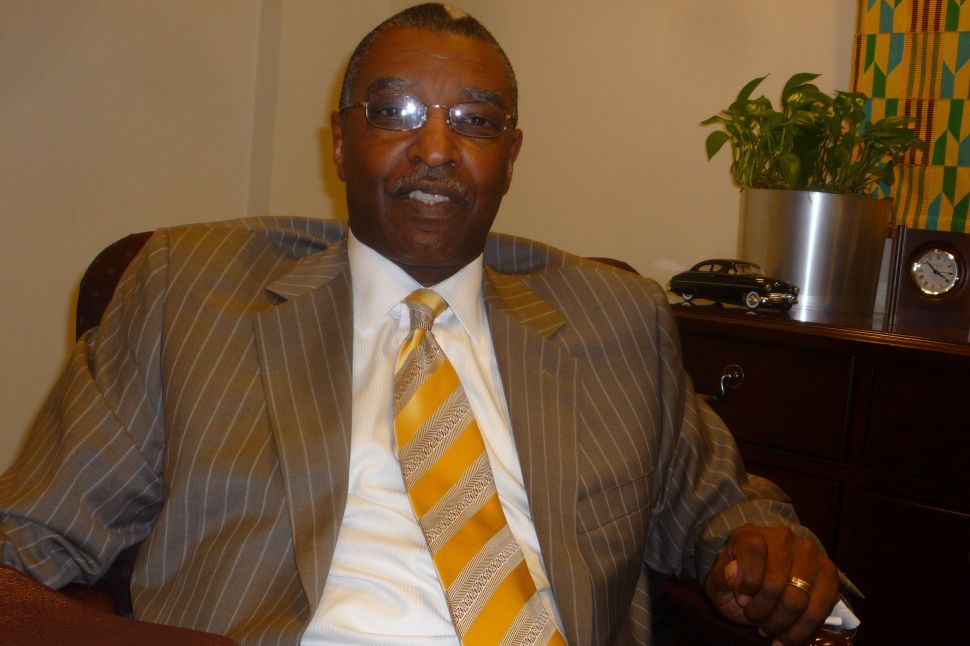