PITMAN – Republican National Chairman Michael Steele came to South Jersey today to campaign with GOP gubernatorial nominee Christopher Christie, calling him a politician who "plays across the state unlike any other Republican in the last 10 or 12 years."

"I am honored to be here today to represent Republicans around the country who knows just how important this race is – not just to New Jersey, but to the nation, because it is a bellwether in so many ways for the future of our party and the future of our nation," he said.

Gloucester Republicans estimated that 175 people showed up to see Christie, the former U.S. Attorney and Steele, a former Maryland lieutenant governor and U.S. Senate candidate, in front of the office of the Main Street Financial Group in this small Gloucester County town. Afterwards, Christie, Steele and GOP State Chairman Jay Webber were off the Vineland for a meet and greet at a diner with the 1st Legislative District's Republican Assembly candidates.

The Pitman event had two distinct strains of campaign rhetoric. Christie held to his argument that the gubernatorial race hinges only on New Jersey issues, resisting pitting himself against a Democratic president whose in-state approvals remain high. National Republicans like Steele, however, see the race as – in Steele's own words – a "bellwether." There are only two gubernatorial races this year, and Republicans are hoping that victories here and in Virginia will cast them as a party on the mend.

Christie gave an abridged version of his usual stump speech, listing rankings that showed New Jersey with an unfriendly business climate and lamenting the loss of residents to neighboring states with lower tax rates. Steele, however, noted that President Obama was coming on Thursday to campaign for Corzine.

"Welcome, Mr. President. But I want to know, since you have such a great rush to get out of Iraq, what is your rush to get out of GM? What is your plan to help us get control back of our companies," he said. "And where is the Governor on this? Does the governor like this bailout nonsense? Oh, I think he does. Does he like that stimulus check? How much of the stimulus check have you seen to create jobs in New Jersey?"

After the event, a reporter asked Christie about whether the campaign was a bellwether for the national political climate, and if accepting national Republican support was an acknowledgement of htat.

The national attention being paid to the race has led to questions about whether Christie will bring resigning Alaska Gov. Sarah Palin in to campaign for him. In fact, that speculation was touched off by a statement Steele made immediately after Palin's resignation.

Despite Christie's repeated statements that he will not invite Palin into New Jersey, Steele held to his original point, saying that "we'll be ready for [Palin] to come out and campaign across the country certainly next year, but even this year, in Virginia, New Jersey, wherever we need to be."

Christie, standing next to Steele, immediately shot the idea down.

"I've said that I don't think that's something that should be necessary here in New Jersey. From my perspective, I want to keep this focused on exactly what it needs to be focused on, which is Jon Corzine and his failed record over the last four years as governor," he said. 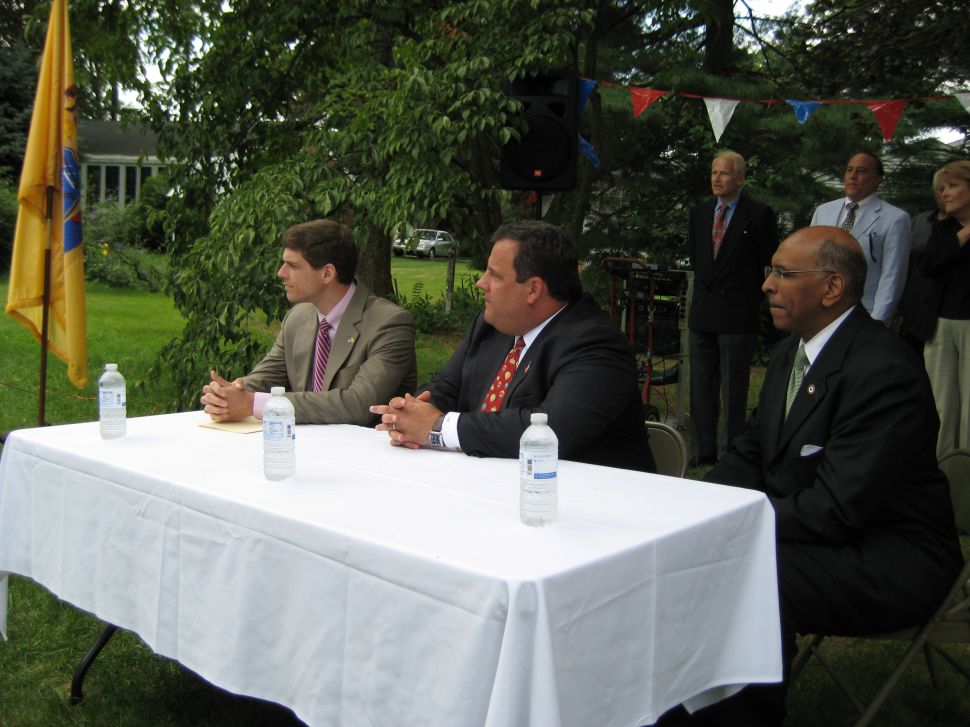