This time, he is the establishment.

Democratic Party dog-soldiers go back to 2006 with Barack Obama, who campaigned in the Garden State for Bob Menendez andmade fast friends with Paterson Councilwoman Vera Ames – among others – when he addressed her personally from the stage at a Passaic County rally.

Since then,Obamacame here fornumerous private fundrasiersconnected tohis 2008 presidential campaign, among them an early Bergen County mixer with elected official supporters he could count on two hands at that stage of his career, including state Sen. Loretta Weinberg (D-Teaneck), Newark Mayor Cory Booker and West Ward Councilman Ronald C. Rice; and later asummer soiree at theMiddletown manse ofJon Bon Jovi after he secured his party's nomination for the presidency and had thebig money behind him.

Now as Democrats hope to solder their champion to the still-standing but wobbling – if most of the polls are to be believed – candidacy of Gov. Jon Corzine in an attempt to create energy by proximity, President Obama's Thursday evening PNC Bank Center rally with the governor stands within a two-year campaign context.

That 2006 Menendez campaign aside when he appeared as arising star but still basically a nobody on the East Coast, thiswill beObama's first big rally in New Jersey in which he won't be the anti-establishment outsider andbearerof heartbreakwhose presence for many Clintonistas was that of an irritating interloper intoning eloquent sweet nothings in the junior New York senator's backyard.

It was on May 14th, 2007, three months and four days after he kicked off his campaign, that fledgling presidential candidate Obama told a crowd of AFL-CIO workers at the War Memorialin Trentonthat the United States must rewrite its trade policies to benefit workers worldwide, enforce existing trade laws in part to diminish the power of China, solve the country’s healthcare crisis, and stop rewarding with tax cuts those American businesses that ship jobs overseas.

Those were the cornerstone issues as he looked ahead to his race against firm frontrunner then-U.S. Sen. Hillary Clinton, who had the backing of Gov. Jon Corzine and State Party Chairman Joe Cryan – and nearly everyone else in the party.

The candidatewouldn't return to the public eye here on that scale until Oct. 22 of the same year, when Obama's grassroots operations joined a professional campaign infrastructure led by State Director Mark Alexander, a law professor at Seton Hall University. About 1,300 people attended a rally at the New Jersey Performing Arts Center in Newark, where students paid $15 for admission and everyone else paid $25.

But by the time he returned in early January,Obama had already stunned the Democratic Party establishmentby mauling Clinton in Iowa – a result that sent panic through the party ranks here, from Corzine down to Clinton footsoliders like U.S. Rep. Bill Pascrell (D-Paterson), who threw on overcoats and headed for New Hampshire in what looked unmistakably like alosingeffortin the face ofObama's onslaught andinevitable awe-inspring early victory.

The forces of veteran U.S.Sen. Frank Launtenberg (D-Cliffside)said their man, locked in a Democratic Party primary, would undoubtedly find the trappings of a Jan. 10, 2008 raly in Jersey City hard to resist. Lautenberg had stayed neutral in the presidential contest, while his rival, U.S. Rep. Rob Andrews (D-Haddon Heights) was a vigorous Clinton backer.

Some of Lautenberg's teamloved the idea of Lautenberg mounting the stage with Obama, who at that pointwould havenot only Iowa- but certainlyNew Hampshire behind him and essentially own the nomination.

But it turned out that Clinton came back and won New Hampshire, which kept Lautenberg out of the endorsement business butfailed todiminish the enthusiasm of more than 3,000supporters, whopacked a gym at St. Peter’s College in Jersey City as the country settled in for a months long Clinton-Obama mano-a-mano, which the latter would finally win.

Less than a month in front of New Jersey's Feb. 5th primary, Clinton maintained a double-digit lead over her opponent here.

"Obama and New Jersey, perfect together," Bookertold the mostly young – and from the looks of the young faces too young to remember the 1980s – clueless- crowdin a nearly pitch perfect Gov. Thomas Kean imitation.

As part of the buildup to Obama’s appearance, State Campaign Director Mark Alexander said the campaign had set up offices around the state.

"Today, after you hear from Barack Obama, we’re going to go set up at the back of this room, and you’re going to find things you can do today to get him into the White House," Alexander told the crowd. "You can talk about phone canvassing, fliers you’ll be able to do, we’re going to go to the PATH stations, I want everybody to leave here with something to do today, and then on Saturday, day of action, 23 actions around the state, phone canvassing, door to door, visibility, sign waving."

Obama appeared one more time for his last big self-promoting rally. It was Feb. 4th, 2008, on he eve of the New Jersey presidential primary and with most polls showing his rival trying to maintain a slight lead in New Jersey.

Several themes ran throughout the rally, including comparisons of the New York Giants’ improbable Super Bowl victory yesterday with underdog Obama; and inevitable echoes of Camelot as the two Kennedys, who’ve both said Obama’s candidacy represents the prospect of inspirational leadership, sat on stools listening to their presidential candidate stir the crowd.

"In the next 24 hours, on what we call Super Tuesday, is perhaps one of the most important moments of your life,"he told the crowd. "The eyes of the nation are going to be on New Jersey and a few other states, to see if the people here in New Jersey recognize that we have a candidate for the presidency of the United States who will inspire a generation."

"For me to be able to bring a Patriots fan to the Meadowlands a day after the Super Bowl, is like bringing the lion and lamb together," said the candidate as the senior senator from Massachusetts buried his head in his hands.

He lost New Jersey by ten points, while winning enough other Super Tuesday states to keep him from far a flatline, though that's how his supporters felt here after thinking they could defeat Clinton in New Jersey.

A few months later, a defeated Corzine and Cryan would join forces with Obama and head to Denver for the National Convention. The governor and state party chairman subsequently talked down those strains of the party still feeling the pain of Clinton's loss, andhelped the nominee secure a 15-point victory in New Jersey, where Republican John McCain was never in striking distance and where the candidate – focused more on Pennsylvania, Ohio and Florida – never had to check his back in what his campaign rightfully figured was a no-look blue state – in that election. 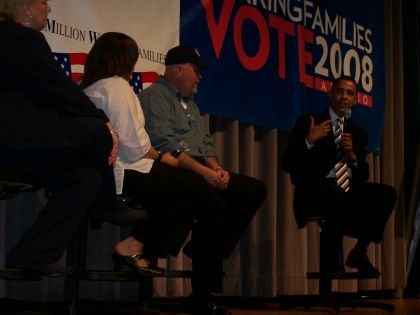